Amoenus has turned IKLECTIK Art Lab into an Ambisonic setup this year, immersed in an amalgam of audio effects. In an organisational partnership, they experiment with the spatialisation of sound, collaborating with diverse musicians and creative practitioners. The co-curated series of artistic inquiries are wholly devoted to developing immersive art conceived in this sonic hemisphere. Sound waves swim across the air and arrive in you from everywhere in such a surround sound format.

For the R&D programme launched in summer 2021, Amoenus has opened the doors to their reverberating laboratory, entirely enveloping the listener above the horizontal plane of the former Tibetan Buddhist Centre’s flooring.

The series opened on a full moon day, energised by the exceptionally effervescent spirit of IKLECTIK, whose team generously welcomed the free-flowing frequencies and made sure they all arrived sound and well. Over the two days of performative presentations of artists’ work-in-progress, one could peek into the process of sculpting sound in space.

Simultaneously sharing the stage with the audience, in a 3D audio arrangement, the artist can choose to send sound to any point in the contained ether. In this way, three-dimensional audio creates a reality in itself; one can walk through and be surrounded by. In such a case, the producer and the receiver both experience the event from within. At the same time and also most importantly, movement is key here.

To experience the effects of immersivity; to be able to embody the fluctuating waves rising and disappearing; like the moon waxing and waning; and to realise that one is an inherent part of this polyrhythmic pulsating surrounding; while being moved by sound; one needs the freedom to move in return. Still, we all stayed masked and seated, and the total of 17 custom-made speakers silently suffocated; viral contagion prevented. The outside resonance was limited, as the static scenario created distance inside the listeners’ ears, 2 meters away from catching the sound spinning around the head.

As an opening to it all, Amoenus founder artist and researcher Christian Duka presented his piece that incorporated sonic phenomena like ASMR and Otoacoustic Emission, inducing direct physiological responses among the petrified audience members. Rigid distance between her and him, while two different frequencies meet immediately producing ‘beating’, a sonic illusion in the participants’ brain. While sonic intensities pierce our vibrating viscera, we try to comprehend this 3D audio arena.

We exchange our green gaze in a chain of chairs, watching the experts experimenting, improvising live inside this stageless theatre. Amplifying objects and different sounding things, Lucie Stepankova, aka Avsluta, interacting with the room as an instrument, gave voice to muted matter, enlivening dead objects, as a reference to the fundamental frequency of the non-living vibratile environment. Overwhelmed by scaled up sounds coming from above and around, while witnessing the minuscule sources of resonance, watching the tiny items handled in the artist’s petite hands, we sank under the waves coming from the spherical speaker system. We dived into the unfolded depths of the objects’ inner selves.

Sonifying movement, giving voice to the dancer’s body, choreographer of Pell Ensemble, Rebecca Evans, experimented with Flowfal, cutting-edge software that responds to built-in sensors of smartwatches, converting the body’s movement to sculpt sound in space synchronously. Next, the performance shared their developments of work-in-progress “800 Lifetimes”, an immersive interactive 360 sound and dance piece.

Finally, a collaboration between Amy Cutler and Tom Fox encouraged the audience to move too and join in. Obediently, one by one, we moved closer inside the circle with a Natural History Museum-like installation, whose built-in ultrasonic proximity sensors influenced the 3D audio environment enveloping us like marine snow, gracefully dispersing across the volume of the room.

Only Pascal Savy opened the doors and let the breath of wind come into this old Buddhist monastery, encouraging the unseen to creep in. Experimenting with acoustic feedback, letting the sounds from a jar full of water, or the outside world, enter this ambisonic ambience. Together with a set of microphones placed inside the array of speakers, the artist awakened the spirit silently sleeping in the interiors of IKLECTIK. Tuned into these atmospheric frequencies, elevated to the blissful state of serenity, we oscillated between the barely perceptible and this fully felt. Sound is like a ribbon linking the solid and the fleeting.

I am wrapping up my writing with a few words on Pietro Bardini and his piece that took the potential interaction between man and machine to the extreme. While his bespoke spatialising software treated each speaker as an individual source of resonance, the artist created a carefully curated computer choir out of the surround sound arrangement.

Approaching the array of 17 speakers as a living entity, sourcing the sound in a sheet of steel suspended from the ceiling, the artist interacted with the semi-autonomous compositional system. Shifting activity between the artist and the algorithm gave agency to the machine, letting it shape the space in return, weaving intensities influencing another alternately, collapsing the hierarchy between mind and matter, inanimate and living, material and ethereal.

The piece highlighted that it is the relationship in-between not just the individual sounds that matter; and instead of the movement that connects the difference; the interval that is inhabited by the artist’s spirit, the space of pregnant silence of the infinite present moment, the physical depth of time passing, this is where the pyrodynamics of affective encounter and exchange get revealed. 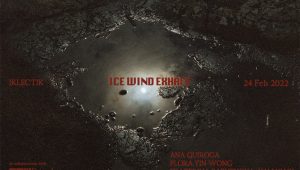