‘AmazonCare(s). Is this the future of our NHS?’ by Artemis Vergou & Miki Chiu

It’s 2030, and the NHS has been bought over by Amazon. The new service is called AmazonCare, and like all things Amazon, it’s faster, cheaper, and more accessible than ever – but at what cost?

With the conglomerate’s first ever London trials entering its second month, Amazon has declared the initial tests of their new ambulance service a success. For those who don’t remember, this unprecedented Amazon-NHS merger, which caused a monumental disruption in the healthcare industry, was announced last year by Jeff Bezos, the 67-year-old founder of Amazon.

In January, 10,000 voluntary participants were selected to take part in the new ‘AmazonCare’ scheme, set to replace the NHS ambulance service by 2032. The trials have been incredibly secretive, but we’ve managed to secure 3 exclusive accounts of people involved in the trials: two patients and one paramedic.

Emily*, 27, sales manager and mother of one, shares: “I can’t express how thankful I am to Amazon for giving me the opportunity to join their AmazonCare program. I’ve always been a loyal Prime subscriber — their cheap and easy repeat prescriptions have made my life so much easier.

Just a week after being accepted, I got into the worst accident of my life – a manual car flew off the road and into the pavement where I was. AmazonCare really came through for me — my tracker instantly alerted AmazonCare. The receipts say the ambulance arrived in 2 minutes 36 seconds! In the ambulance, paramedics already had my medical history on hand, so could treat me immediately. It really was incredibly efficient.

And they did really well in making me feel at ease. They’d synced the ambulance interiors with photos of my daughter — I store them on Amazon Photos — and it was just a really reassuring experience overall. I’m really grateful, and I think it’ll be a great thing for everyone in London. Of course, there’ll be people against it. I imagine not everyone would be happy with making their medical history available to a huge conglomerate like Amazon. But you have to remember, you’re doing this every day, to hundreds of companies. The NHS was a conglomerate, too. It’s an unavoidable part of life nowadays, and I think it’s a good thing that Amazon wants to make the best of it for their customers.”

Maria*, 21, a university student has a different opinion: “I was on a night out clubbing. I lost track of my friends at some point, blacked out, you know how it is. When I woke up, someone on the trial was calling the ambulance for me — and the whole thing was just a f*cking joke. I only caught part of the conversation, but from what I gathered, because I was a ‘non-emergency’, they wouldn’t dispatch an ambulance. And do you know what they did instead? They just shoved me in the back of a f*cking delivery van with some boxes. They kept saying how AmazonCare drivers are first-aid trained like that made it okay. I don’t actually remember talking to the driver or anything. But I do remember sitting inside the van. I had to watch beer and hangover commercials the whole time I was in there. The whole thing’s a money grab, and I’m never subscribing to AmazonCare. No one should.”

Jaspar*, 28, trainee paramedic also told us: “I joined the NHS 5 years ago as a trainee paramedic. Amazon approached me about two months ago, asking if I would be interested in being part of their trials for their new AmazonCare program. I’d heard a lot about it from my mates and the media. You can’t have heard of it if you’re working in the NHS. It was the news of the year. I thought I might try applying for a position in the scheme, because why not? The job role didn’t sound much different from what I was doing already with the NHS, but with slightly better pay. Plus, I was fed up with the NHS’ long hours and rubbish equipment. I know a lot of my mates applied to join too, but I was one of the only ones who got selected for it. The whole thing’s been kept very much on the down-low. Officially, I’m transferring departments, and only my supervisor knows otherwise.

I can say that the systems they’ve put in place are a lot more efficient. It makes a lot more sense and is something the NHS should’ve done ages ago, but never had the capital for. We’re only dispatched for actual emergencies now, and their new ambulances are state of the art. But the vibe is also kinda… Weird. We’ve got scripts for nearly everything; it’s a very customer facing take on healthcare. One of the things they emphasize is never to call the patient a “customer” or “patient,” but call them by their preferred name instead. Which is all automatically made available to us and everything. It’s also crazy how much data they have on all the patients, and their algorithms can make some insanely accurate predictions based on their other Amazon habits. It’s great when it comes to treating the patients immediately, but it also makes me wonder. I’m still not quite sure how I feel about AmazonCare. I mean, I’d probably use it myself. Probably the paid versions. I’d be wary about it, though.”

We´ve seen some positives and negatives aspects of the initiative, but what are the ethical and moral ambiguities of a service like this? What are the costs of this ‘free’ healthcare? What is the value of your medical data? What does it mean if a company knows your spending habits and your medical history? Are you a patient or a customer?

*names have been changed.

The project presented in this article, AmazonCare, is the result of a speculative design project at Goldsmiths University. The initial brief asked us to look at the future of the commercial van, and we honed down on investigating the ambulance. In the current climate of Britain is on the brink of Brexit, the UK’s National Health Service (NHS) has felt increasing strain as its budget is cut. The NHS struggles to find enough health care professionals to meet increasing demands and has been used as a political bargaining chip (think the Vote Leave campaign bus, with the words “We send the EU £350 million a week let’s fund our NHS instead”)*. All these facts posed many interesting questions in the context of this brief, as we speculated on how the NHS might survive or evolve in this future. One of these evolutions was to combine Amazon, a huge and incredibly efficient delivery service, with the NHS.

Initially, we used traditional UX and design research methods as a starting point; interviewing paramedics and investigating the kinds of data that get collecting from us. However, we didn’t want to redesign the ambulance itself. Instead, we were more interested in looking at the sprawling systems that might arise from the combination of Amazon and the NHS. Speculative design then became the most useful tool for us to imagine this future, a kind of design not overtly focused on creating things, but ideas. Design here is used as a research method, and critique of an informed speculative future. We then used our findings to feed into and build our future scenario, as a series of collages, audio recordings of ‘future’ phone calls, and two short films.

In this work, we are keen to map out the ethical and moral ambiguities of a service like this. What are the costs of this ‘free’ healthcare? What is the value of your medical data? What does it mean if a company knows your spending habits and your medical history? Are you a patient or a customer?

‘AmazonCare’ operates through proposition, exaggeration, and deliberate presentation of our technological future. In establishing narratives of use, we take to storytelling that embraces uncertainty and interpretation, asking more questions than it answers. These scenarios are made believable by a carefully considered mix of reality and fiction, temporarily suspending disbelief and offering a glimpse into our constructed future. We are faced with rising complex ethical and socio-technical questions on a global scale, particularly regarding the handling of our data use.

As the 2018 Cambridge Analytica scandal showed, big data has the potential to be incredibly damaging to a democracy. How can companies remain transparent and held accountable, so that the benefits of data can be reaped while minimising the negatives? What role can design have in all of this? In intertwining Amazon and the NHS as our research method, we use this as a lens into systematically exploring what the future of privatised healthcare may look like, here in the UK. Through this project, we have speculated on how a conglomerate would redesign the existing emergency healthcare system to be both an efficient healthcare provider and a profitable business at the same time – perhaps occasionally at the cost of individual consumers.

In this speculative design project, the ‘design’ is not the graphic output, the commercial vehicle design, or the film outcomes. Design here is used as a research method, and critique of an informed speculative future. ‘AmazonCare’ operates through proposition, exaggeration, and deliberate presentation of our technological future. In establishing narratives of use, we take to storytelling that embraces uncertainty and interpretation, asking more questions than it answers. These scenarios are made believable by a carefully considered mix of reality and fiction, temporarily suspending disbelief and offering a glimpse into our constructed future. We are faced with rising complex ethical and socio-technical questions on a global scale, particularly regarding the handling of our data use. 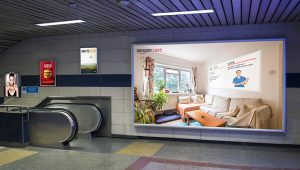 Insight: Amazon made its latest move into healthcare