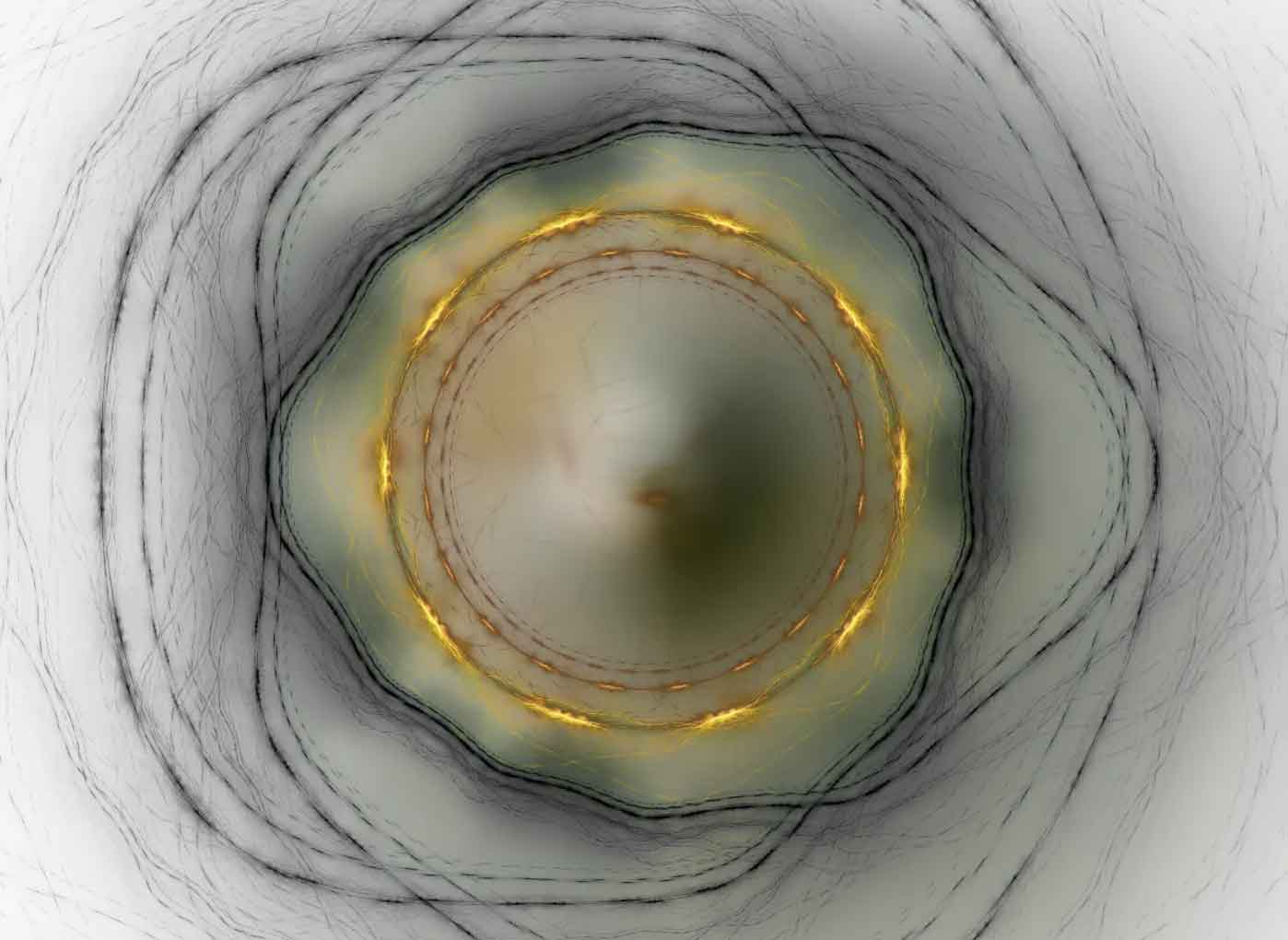 ‘AI Am I? Yeah, We Are. Alexander Reben and the Machine’ by Charlotte Kent

“The creativity of culture has no outcome, no conclusion. It does not result in art works, artifacts, products. Creativity is a continuity that engenders itself in others.”

James P. Carse wrote that in his cult classic Finite and Infinite Games: A Vision of Life as Play and Possibility (1986) and it comes to mind while regarding the works of Alexander Reben, an MIT trained roboticist and artist, whose work plays with boundaries. As he says to me when we speak, “unexpected outputs are always fun.” This is particularly true of his most recent body of work AI Am I? Here, he collaborates with the machine to produce physical works that question notions of creativity and authorship––as Duchamp established more than one hundred years ago and conceptual art, et al simply reinforced. So that’s not particularly interesting. What does become interesting is the way Reben turns the vast critical dialogue surrounding art into a creative space.

For AI Am I?, Reben uses OpenAI’s GPT, a third generation language processing deep learning model, to develop initial text that he feeds back into the system. That produces a description of the work as well as critical commentary about it. The fake artist names are generated from a neural network trained on names. So, from this initial sample starter text: This sculpture consists of zip ties attached to the links in a nearly hundred foot chain hung across a room, on the floor or from hooks on a wall. The zip ties alternate colour from orange to black and the chain is coloured silver.

GPT develops multi-paragraph analyses, each with a different interpretation. I have extracted the main thesis of each output below, but recognize the full text includes formal analyses of the work appropriately tied to these concepts :

1. This sculpture is a commentary on the growing influence of technology and its effect on the environment.

2. This sculpture is a commentary on the restraints modern society puts on the human soul by limiting our creativity, free will, and individuality.

3. This sculpture is a commentary on the potential negative consequences of nuclear weapons as well as an acknowledgement of the lack of accountability for their worldwide production, stockpiling, and use.

Reben makes physical objects based on the initial texts but the whole work is the object with the neural network name, the critical texts, etc. The passages often include quotes from other fake critics but also reference and comparison to known works of art. The writing style is a little clunky (for those of us who like to play with words) but that is a minor criticism given the leaps technology is making. This work has already been discussed by Forbes, amidst the furor around GPT. Matthew Sparks asked in The Guardian back in 2014 if a machine would be replacing art historians, but of course, that (as with anything automation related) depends on the criteria.

AI Am I? may represent how intellectual labour, as well as manual, can be automated, but for Reben it is really about thinking through collaborative processes with the machine. There’s the Thought Renders series based on the brain activity of a person thinking about an adjective-noun combination. The collaboration is necessary for there to be anything at all. Variations on this theme include AmalGAN, Five Dollars Can Save Planet Earth, AI Misfortunes…it is the refrain across all his work and one he approaches with curiosity and wit.

He has always been building things but was in school for engineering when he got involved helping artists at Eyebeam. One of these first projects was conceived by Alicia Eggert who needed technical assistance realizing it. Pulse Machine is a countdown clock of the average lifespan of those born in Nashville, Tennessee on 2 June 2012. It is accompanied by an ominous kick drum. The work dies once it reaches zero. Is the work his, hers, both? Does it matter outside of a Vasari-like biographical art history or for intellectual property reasons?

I only recently discovered Reben’s work when one of his CIAo (Code In Art Out) pieces was included in the current show The Game of Life, at Kate Vass Galerie curated by Jason Bailey (works on view through October 30. CIAo produces art objects derived from code. The final work includes the QR code that contains the script as well as the script written out. He’d previously produced Code on Canvas, which was a series of diptychs with one canvas showing the visual outcome of the code on the other canvas. Recognizing that 53% of the global population has access to a web browser, he decided to make his works available as a string of text that produces an HTML web page, apt during a quarantine. The script or QR code does not link to a website but is the code that tells the browser what to render, so there is no need for an internet connection to see the works. You can hang your print at home, but keep the code with you and see it any time, or share it with others. This is where digital art gets interesting.

QR codes mostly contain web-links, but can hold any textual information (up to a certain size), which is why they make “the ideal optical storage and archival medium for CiAo code,” as Reben says. The artist’s special website https://www.qr2a.xyz/ (which reads as QR to art) explains his process in great detail for those who want to play with the idea themselves, along with a gallery of works. Interested in playing with medium, Reben has also produced blockchain artefacts, most notably TokenArt that inverts the process since viewers ‘“develop” their own exclusive but reproducible tangible artwork by way of a physical token linked to a unique intangible identifier.’ It’s this kind of inversion that makes Reben’s practice important. He’s not a process artist, but he’s not focusing exclusively on the end product. He’s willing to risk the absurdity at the heart of creativity itself.

Reben knows his work has an element of humour and cultivates it. Humour makes anything more approachable, even complex ideas like what are we doing and where are we going? Existential angst as it appeared in Paris post World War 2 is now just too emo. The machines may take over everything but if they really are, then rather than wring our hands about it, let’s engage them thoroughly. It’s a variation on that old existential crisis of knowing you will die and so relinquishing the horror of your own demise to live fully.

Art can draw you in without being pop, although Superfluous Automation: Bubble Wrap will actively engage popping since it is a “machine to efficiently and quickly pop bubble wrap” –hence eliminating all the fun to be had therein. Which is his point. Everyone talks about automation but in the excitement of its possibility, we may forget to examine and discuss why we want to automate these things at all. That may uncover much larger social problems, fears, biases, structures that deserve to be redrawn. The prototype needing tweaks might not be the object in front of you but all that surrounds you. Much of his work is about the tenuous relationship between man and machine, one that we are still designing, but not alone.

Reben thinks a lot about how humans project humanity onto objects, designing BlabDroid (a sweet looking box robot that needs help), but also consulting for major companies around the world. There is a rather marvellous head scratcher, Headgasmatron, that he designed to offer the unusual sensation (for most of us) that a robot could make you feel good. Watching people experience it is some of the fun (sort of like watching people in HMDs). Then there is the work based on Asimov’s First Law, “A robot may not injure a human being or, through inaction, allow a human being to come to harm.” Reben designed a robot with needle to puncture, or not, any human finger that it detects. There’s no escape valve that humans are responsible in the background, as with drones, so now that this harm-inducing robot exists, let’s confront it.

But, Reben’s are not moralistic objects. They are not the outcome of a grant proposal that guarantees its scientific or cultural efficacy and significance before the experiment begins. How horrible that so much research has devolved into that-which-is-publishable. Thankfully, some quirky thinkers are still making things for no reason at all but to do it and see what happens. In another passage, Carse writes: “What confounds a society is not serious opposition, but the lack of seriousness altogether.” Certainly, some portions of the whole must work seriously within the constructs provided to address the dilemmas we face, but sometimes the ideas we need come from those who weren’t thinking on the same terms. It’s a risk. That’s what makes it creative.