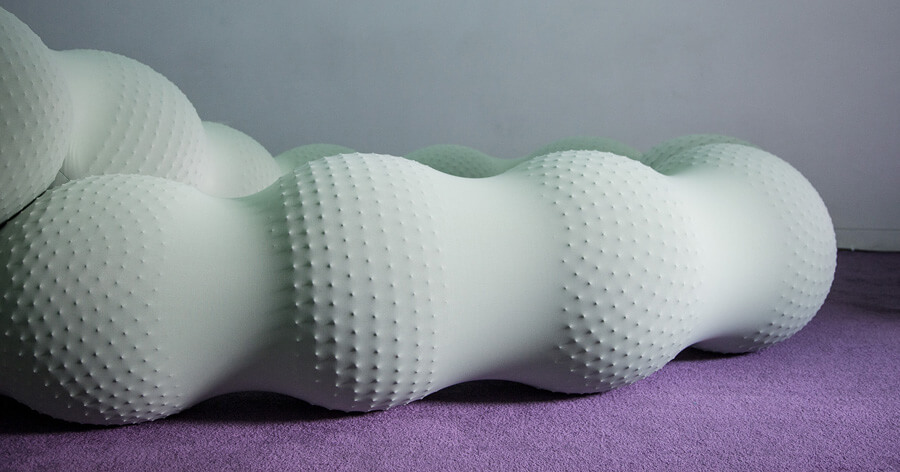 Who cares? A radio tale is a project co-curated by Agata Kik, Naz Bescan, Ibrahim Cisse, Benedetta d’Ettorre, Alba Folgado and Harriet Costello as part of the Curating Contemporary Art Programme MA for the Graduate Projects 2018 at the Royal College of Art.

While working on the curatorial project Who cares? A radio tale, we immersed ourselves in the act of listening and on radio waves departed on our exploration into the depths of affective labour, so pertinent to the curator’s work. Simultaneously in Gasworks Gallery (London) and in the ether of frequencies on renowned radio station Resonance FM.  We took the audience on an aural journey to raise awareness about the unrecognised emotional work that exists in all parts of life and all different sectors of the contemporary economy.

What has this project taught me about affective labour in my practice as a curator? Products of affective labour, social relations, for example, are invisible. The choice to use the immaterial medium of radio to investigate this concept highlighted, thus, the invisible cacophony of significant political, social and economic issues. The medium of radio also brought to the fore the amount of affective labour carried out through voice, mostly female voice. As curators, we benefited from affective sonic intensities that materialised in the bodies of our programme’s listeners, either physically present in the gallery or far away tuning in to the radio or logging on to the online live stream.

Opening the live project, on the first day on site at Gasworks Gallery, the audience would enter the participation room with their feet sinking into the purple-carpeted floor. Hardly navigating through the knot of spectators,  they get closer to the soft sculpture that they encounter in the middle of the room. This is a work by Eva Fàbregas titled Picture yourself as a block of melting butter. Made out of elastic mint-coloured fabric and filled with inflated balls. Inspired by ASMR techniques, Eva’s spongy sculptures usually include audio parts played from headphones attached to them. Like a guided visualisation, a female voice helps you relax and tells you to soak into the soft mass that you are now in contact with. Widely distributed as online videos, ASMR techniques are meant for relaxation and exciting of physical sensations they were played at the beginning of each of the project’s broadcast sessions, this work pointed out extreme commodification of emotions and the fact that influencing others emotionally, nowadays pays people money.

The show moved then to the spoken word performance Her Hair by Claudia Pagès, which culminates affective labour in the body and in listening. The piece is based on the artist’s expanded novella, in which she treats hair as the object of her research. While performing the novella’s last chapters, the artist can hardly move through the crowded space in Gasworks. She exchanges her gaze with the absorbed members of the audience. At the same time, instead of piercing gazes, her euphonic Spanish accent mixed with sharp music beats vibrates in the radio listeners’ ears. What does it mean to embody the writing? What is the difference between spelling words and their pronouncing? How is it different to watch rather than to listen to someone performing? It seems it it all comes down to the body. When together in the same galley room, energy flows through animate and non-living matter in proximity. The physical encounter lets the invisible intensities influence each body in the audience. On the other hand, the voice on the radio is this sound that transmits not only its verbal content. Voice is born inside one’s body, which while listening to the radio one cannot escape imagining. 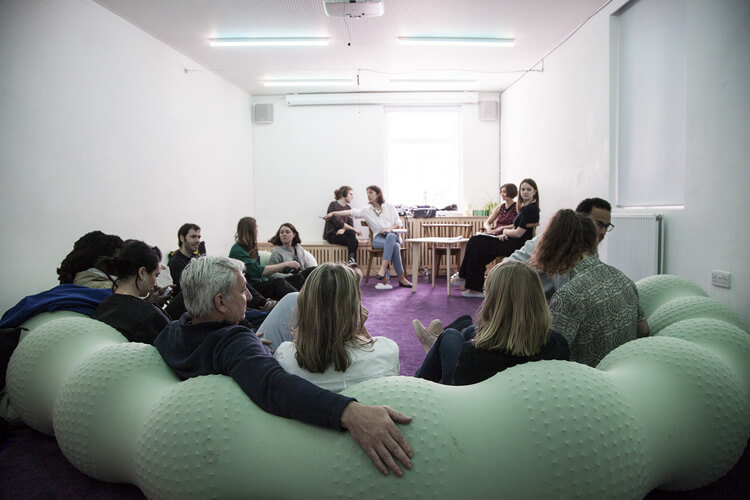 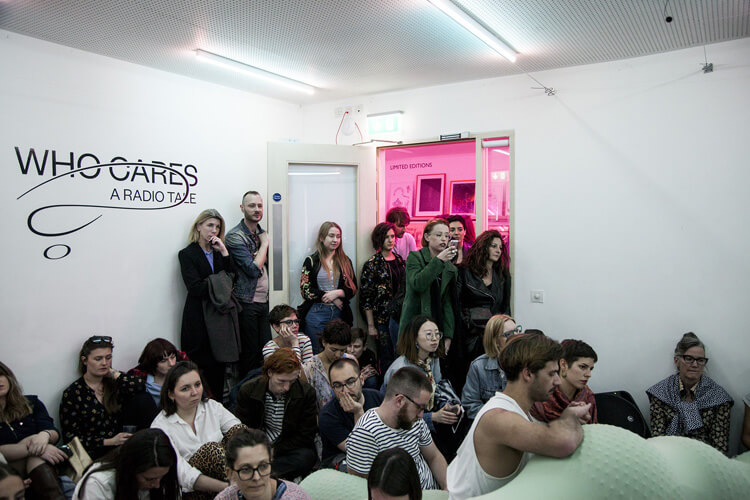 Labour of voice and labour of listening takes place in our bodies even while sleeping. Living bodies never stop working and it is difficult to refuse to hear. Sound is formless but still not powerless. In this project radio and sound let us place the listening subject at the core of the experience. This stems from the fact that sound in contrast to an image lacks perspective and thus is free from hierarchical comparisons. The act of listening breaks away from the binaries between the inside and the outside, between the object and the subject. Sound denies distance. It happens inside the listener’s body, while its frequencies penetrate his or her corporeality. The body is also at the centre of the theory of affective labour. Affective labour brings together the corporeal and intellectual aspects of production and acknowledges the fact that the body, not only the mind plays an active role in performing the job. Affective labour does not only consider the body but rather its fluidity and morphing, porousness and permeability, the body that is prone to the flux of energies that result in its constant becoming. Affective labour underlines the power of the body to influence the other and the ability to be influenced in return. The value of this kind of labour is produced by reducing or increasing of a body’s ability to connect and captivate. What is more, bodily interactions between humans turn out to be profitable in the contemporary economy’s state?

On the second day of the project, the soft sculpture was positioned differently. Visitors would come in and lean on it to create a circle for the Women of Colour Index Reading Group. During the collective reading of Understanding Patriarchy by Bell Hooks, audience members passed a microphone, while their voice was live broadcasted through Resonance FM. In this moment the diverse, and frequently muted voices were given a chance to be heard globally. Looking at affective labour present in the art world ended with the performance Bonus Hour by Rosalie Schweiker, Sophie Chapman and Kerri Jefferis, closing the whole project. The artists staged a radio show questioning who gets premiums for their work and why.

Our curatorial project mostly focused on the encounter between its audience members, artworks, artists and curators, even at an international distance. Despite being listened to in separation, radio as a medium is a powerful tool in bringing people, ideas and places closer. By opening the doors of our radio studio in the gallery, we gave a chance to the viewer not only to hear but also to see the radio processes and even participate in their development. Apart from raising awareness about the unrecognised affective labour, our project also aimed at empowering the listening audience. As an experiment, by organising a reading group on the radio, we opened the space for the public discussion that would not otherwise happen outside the gallery walls.

Listening to the artists crunching waffles, while presenting their radio performance or watching their crumbs falling onto the gallery’s floor, the audience was confronted with a scenario of trying to get a bonus in the indifferent to precarity art world. Even though so rarely thanked for, why do we, as curators or artists, still put in so much invisible work to succeed in our jobs? Why do we stay up late at night sending emails? Why do we socialise instead of sleeping? Why do we deal our weekends for more work in return? Why have we forgotten what free time once meant?

Wherever one puts their heart into, affective labour abuses one’s life and ends up in intolerable exploitation. We have to admit we love what we do. It is our passion that makes us sacrifice our lives outside of it. We are subjected to our emotions. We cannot help but follow the feeling of urgency and neither work even more. And more. Affective labour is dangerous; it steals our energy and makes us believe we feel better while doing it. As a radio project, Who cares? A radio tale, thus, shouted out to its audience: take care of your body, do not let your beloved work turn into voluntary slavery, cultivate the boundary between your work and life, sleep more, stress less and let sound relax your nerves!

Please consider affective labour once again by listening to the podcasts of the two days of Who cares? A radio tale that you can find available on Mixcloud because as curators we do care! 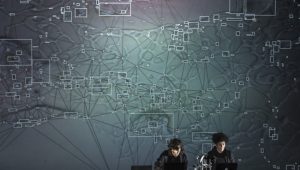