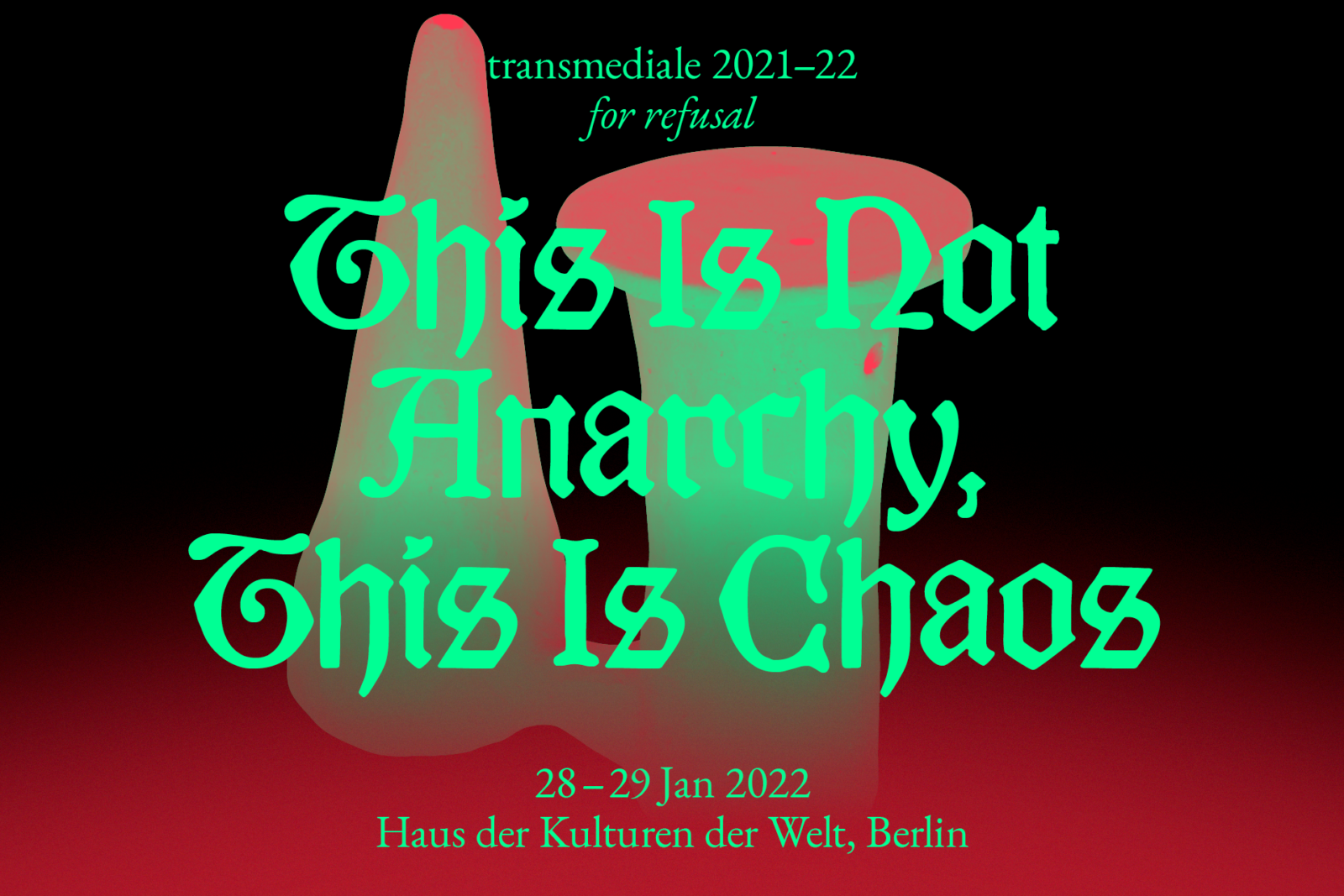 As part of transmediale’s 2021–22 festival edition for refusal, unfolded over the course of a year, a symposium will be taking place on 28-29 January 2022. The symposium comes alongside the exhibition abandon all hope ye who enter here.

This Is Not Anarchy, This Is Chaos‘s two-day programme navigates refusal through positions of belief and compromise and will take place at Haus der Kulturen der Welt, in Berlin, as well as live-streamed online, featuring in-person and remote participants.

A non-stop binge-watch, the symposium will feature conversation, talks, film and performance. Participants will examine relationships between desire and extraction, the terms and conditions of political negotiation and participation, the leveraging of economic value to generate compromise and look at possibilities for calculating otherwise.

A few names of the participant list include Mary Maggic, Patricia Domínguez and Nicole L’Huillier, Zach Blas and more will be announced in the coming days.

Over the past year, transmediale has been mapping out the political agency of refusal, exploring its potential to form new socio-political realities. Beginning with an understanding of refusal through the three key thematic strands of friction, scale, and entanglement, the festival aims to conclude this inquiry by exploring the limitations of refusal through two further thematic strands: belief and compromise. By building an understanding of different modes of refusal and how they intersect, the festival aims to explore how different tactics of refusal can form an assemblage of collective political responsibilities.

The dilemma for refusal has never felt quite so urgent. Easily misunderstood as a gesture of inaction and passivity where nothing happens, a refusal instead can be an insistence on an alternative or a demand for reform. From boycotts to strikes to collective or individual withdrawals, the long and paradoxical history of refusal suggests political and social imaginaries that say more than a mere no. As an act that often carries with it both risk and promise, a refusal opens up possibilities for worlds that can and should be.

The task of refusing is not without its difficulties – it is made up of compromise and friction, and demands for acting and imagining in ways that lie outside the status quo. Manifesting in many forms, a refusal can call attention to uncommon and messy practices, crucial to the critique and reinvention of our material world. For some, refusal is a luxury that stems from an advantage; for others, it manifests from regressive, reactionary politics. Too often refusal is a stance adopted after years of exile, exclusion, or oppression. It asks for multiplicity, difference, and co-existence, rather than fixed systems of logic that organise and tie socio-political lives to undeclared algorithmic biases and colonial histories.

These last two events, the exhibition and symposium, will round up a year of artistic explorations which have been taking place across multiple venues, including its first public space, transmediale studio, and its curatorial online platform Almanac for Refusal. We highly recommend checking the almanac for a good dive into transmediale’s for refusal investigations.

More information on the symposium following this link.