Rewire, one of the annual international festivals for adventurous music, returned to The Hague in April with its eleventh festival edition, bringing together a wide range of musical and interdisciplinary performances, including commissioned works, club nights, installations, and talks screenings. For the first time this year, the festival occupied Amare, the city’s new cultural hub and performing arts institution in the centre of the Dutch capital.

Originating in the same locality as the unique ArtScience Interfaculty promoting interdisciplinary practice-based research, merging art and science since 1989, rewire further cultivates this neighbouring academic environment, combining experiential and conceptual approaches to art and technology within the sonic field. Apart from the festival’s exciting music line-up, an artistic programme also opened up a discussion around the themes of NOISE, AFFECT, RITUAL and beyond.

The public events, including talks, installations, screenings and an art exhibition, occupied the physical spaces, finally freed from Covid-19 regulations. Overall, the programme reflected on how artists explore and understand interactivity and affect through sound, voice and artistic practices, along with the relationships between humans and of these humans with machines. After the last two years of challenging experiences have made many (speaking for those with a Western perspective) to reconsider our more basic-level functioning as human beings, Rewire’s art programme curation team invited the audience to some deeper thoughts throughout the artworks and discussions presented.

The exhibition Proximity Music: Sensing After Thought, curated jointly by Rewire and iii – an artist-run community platform supporting new interdisciplinary practices linking performance, technology and the human senses that contributes to international developments in the field of Art, Science & Technology-, used the idea of interruption to enter a discourse on different states of human sensing, being and perceiving the world.

The exhibition contrasted experiences of mental and physical activity. At the same time, the theme behind curatorial thinking traces energy, transforming between a thought and an act, belonging to the body or the mind. Whether fully aware and in touch with the self, or unconscious like a casually computing machine, we are alive, anyway, and our presence is marked by a specific time and space. Perceiving and processing, without a break, some of the inputs from our sensory systems enter the psyche, but most of them are never recognised by the reasoning human brain. Like a sound wave, we oscillate between being and knowing, between focussing and forgetting or between analysing and feeling.

Matteo Maragoni, director of iii and curator of Proximity Music: Sensing After Thought, shares that The Hague has a thriving homegrown Art, Science and Technology scene. iii was founded in 2013 as a group of recent graduates of the ArtScience Interfaculty, a department jointly hosted by the Royal Art Academy and Conservatory, and since then has grown from the initial collective to an international platform. iii started the collaboration with Rewire just before the pandemic, but it was postponed for a while, as with many others. However, as an organisation based in The Hague, which also has the function of representing the community, iii feel the need to work together with partners that have a broader reach: The collaboration with Rewire works very well for us, as we share a lot with the festival in terms of goals and values, Maragoni continues.

Both platforms presented Proximity Music in September 2021. The exhibition spread around the whole city, which was the opposite of the online events we had been experiencing. Proximity Music presents localised, intimate, physical experiences involving all the senses. The collaboration worked out so well that they decided to continue for the 2022 festival edition. Rewire proposed to work with this new place, Amare, which sparked the iii team’s curiosity: what can we do there? Getting into more details on their curatorial process Maragoni also shared: as usual, it started from the space offered. What can we do in this foyer? It’s neither a black box nor a white cube. It’s more like a shopping mall or an airport. So that was my starting point: how to address people who are passing by a few ramps or escalators. That reminded me of the conversation between Cage and Feldman on culture and distraction. The works presented mainly were projects by current and previous residents, which we combined with a few additional guests.

The artworks presented use technology questioning human thinking that is delegated to the senseless machine or that which happens in the innate intelligence of the intuitive human self, and are pieces particularly interactive, enacting multiple events of knowledge through the participants’ bodies. With the specially commissioned works, the artists allowed the viewer a chance to experience what it means to be interrupted to become aware and then drift away immediately.

Working with human voice and song, American artist Jacqueline Kiyomi Gork presented The input of this machine is the power an output contains, a durational performance involving an AI-generated text created with a machine learning system, trained on political speeches. The set-up was an architectural structure especially created for this festival’s edition in the Amare’s basement. Supersaturated, almost clinical bright lights made the audience very aware of being present and the piece’s physicality and spatial awareness.

Further exploring the listening experience, not far away from Amare, in an intimate and dimmed gallery space, Angelo Custódio soothed our ears and sight with an audiovisual piece HUM (an/other) that incorporates touch and artificial intelligence through a machine learning system and the spectator’s physical presence, interacting with the artist’s voice. In HUM(an/other), I wanted to develop an intimate encounter with an AI entity. Encounters are non-linear events, alive and vibrant. Being surprised by the unexpected and what that prompts is just ‘magical’ for me. So I am definitely not interested in fully controlling the ‘final’ result of my work, even when collaborating with a machine. Custodio explained.

While combining the most recent achievements in machine learning with the early 20th century’s surrealist experiments, Soyun Park & Wellsgoodness (Inwoo Jung) showcased a premiere of their audiovisual collaboration Fantasia Realism based on a trained machine model that will generate a composition of visual and sonic material, manipulated live by the artists in a theatrical performance.

A playful and haunting performance, one would like to have watched an infinite time to decipher all its details and secrets. I barely had special approaches to physical presence for this project, but while performing, there were some moments I felt like the costumes and/or some mystery were manipulating me. However, Soyun certainly had some approaches to her physical movements. The sound that I collaged and produced for this project has its own physicality, movements, and narratives. It is an existence and a synesthesia world by itself. And it corresponds to the other elements such as images, costumes and stage & objects, scent, humidity & temperature and artificial intelligence to summon Fantasia Realism. Wellsgoodness shared about the creative process around the piece.

Mint Park and Quiet Ensemble collaborated for a harrowing performance with sound, laser and fluid dynamics, attempting to govern a miniature ecosystem within a black box theatre space. Specially comissioned for Rewire, the piece was the outcome of an extensive 1-weeks residency in The Hague. As a result, the audience was embedded in a sea of smoke and phantasy fluids surfacing above their heads, almost recreating inside a mysterious faraway planet’s ocean.

Once one had arrived at their physical limits of running around the city and needed a moment of comfort, back at Amare, artist duo Arvid & Marie were offering mind-body care services in their new mechatronic massage chair that will relax the visitor and speak, responding to their words. The bizarre-looking chair definitely hinted at strange exchanges and interactions, but at the same time, the faces of daring users gave a sense of fun, comfort and playfulness.

Spanish artist Jesus Canuto Iglesias, also a graduate from ArtScience Interfaculty, constructed The Contemplation Bench, specially commissioned for the Rewire 2022’s edition, accommodating at once, in a circle of up to 12 people, all those who were willing to stop and sit down to feel the music physically rather than to listen. Placed under the benches, industrial vibration motors shook the audience’s sitting bones for them to share this intimate experience of feeling rather than cognising the compositional set.

Mihalis Shammas also presented a challenging experiment, with his reinvention of the harp combined with electronics to create a mesmerising sound world that carries listeners into another time dimension. His architecture, industrial design, and music background have given him the vision to construct this new instrument and meld electromagnetic induction electronics that excite the strings and generate continuous sounds.

Aircilla, a monumental mechanical sound sculpture by Gemma Luz Bosch & Jurriaan de Vos installed in Amare’s main hall, “clocked” at every hour while the building was open, dancing in the air, creating three-dimensional animated geometry and music. While locally based Chinese artist Kexin Hao presented the specially commissioned piece FutureDance of Nostalgia, a dancing video game-like environment invites the viewer to join the choreography of pre-industrial, heavy physical labour movements in her work. Happening several times a day at the Amare foyers, these installations provided an entertaining break before tackling some of the music performances in the main auditoriums.

Outside Amare, the main square hosted Sounding the Spui, a project by the Institute of Sonology that compresses the geography of The Hague into an acoustic experience for all passersby to experience in the centre of the city. The set of speakers strategically positioned around different corners of the square provided a city soundscape within the city, haunting and disconcerting but close and familiar at the same time.

Tactology Lab, a programme run by Sounds Like Touch for artists and creators who want to experiment with new physical ways of interacting with electronics on stage, run a workshop that presented uniquely crafted electronic prototype instruments built by twelve selected artists. Talking with Dianne Verdonk, she shares:

For this Tactology Lab, we’ve worked with a theatre director and so-called ‘tech dramaturg’ to be able to work on the interaction of the artists with the instruments and how to relate to the audience. That has helped a lot: huge steps were made by everyone in the last two days prior to the performance at Rewire. I think there was a noticeable difference between the performers and non-performers, mostly in the way they direct their attention to all the actions they’re performing on stage. And how they have a feeling for how things could come across to the audience.

The Rewire 2022 discourse programme returned to ground the festival lineup into conversations and considerations on the many folds of contemporary music, bringing an overarching sense. The year’s discourse programme circled around three key themes – NOISE, AFFECT and RITUAL. Themes were very present in the whole festival programme and felt very present throughout its duration. With keynotes by Meredith Monk, the renowned multidisciplinary artist, composer and perfomer whose practice this edition of Rewire was revolving around and Marcel Cobussen and Luis Manuel Garcia-Mispireta gave inspiring presentations on the necessity of revisiting noise and its inscription inside the socio-political sphere and an introduction to affect theory and its relationship to sound and music respectively.

Adventurous, as much as art gets, experimental, as much as new technology appears to be, moving, as music has always been, Rewire 2022 artistic programme felt like a container for complex concepts, interrupting old structurings, provoking thought through affect. 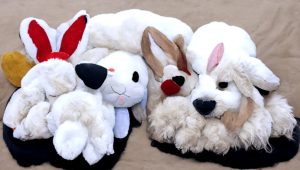 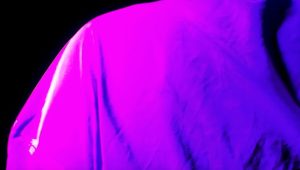 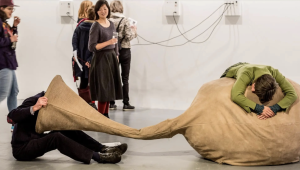