Thinking about the appeal of the minimalism of code, when artists began to explore computers as a medium in the 1950s, technology was limited and the resulting minimalism in expression was a necessity. But as in any new technology, as it develops, its output’s sophistication and intricateness increase at the same time. Nowadays programmers work on high-end games and movies, utilising clusters of the fastest computers available. For Robert Henke the sight of a green cathode ray tube display once was the promise of an exciting future, now it is nostalgic.

The German artist and software engineer, one of the most influential figures in electronic music, is renowned for his music productions (mainly as Monolake) and installation and audiovisual shows exploring the nature and potentiality of sound and sensory spaces using high power laser beams. And he is back with a new show that he will be presenting at Unsound Krakow, the experimental music and arts festival, on October 11.

The CBM 8032 AV project is an exploration of the beauty of simple graphics and sound, using computers from the early 1980s. The result of three years’ work, the show has been produced entirely using restored Commodore CBM 8032 computers. This work is about the ambivalence between a contemporary aesthetic and the usage of a very limited technology from 40 years ago. Everything presented within the project could have been done already in 1980, but it needed the cultural backdrop of 2019 to come up with the artistic ideas driving it, Robert says.

The CBM 8032 computers used for this project are the grandfathers of the successful C-64 and directly descend from the mighty Commodore “PET 2001” series. Unlike the C-64 they had no sound chip and neither colour nor pixel graphics, just text and symbols. They were used in labs, in offices and for education. They are iconic objects of the beginning of the personal computer area, and they are driven by the same CPU which is also used in the Apple I and Apple II computers. And most importantly and relevant these days of the Silicon Valley technocracy, the development turned hippies into computer nerds, and later into billionaires, it had impacts on popular culture on many levels from cinema to poetry, from music to graphic design. 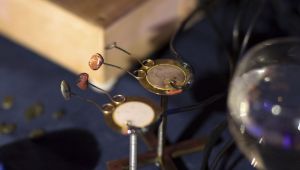