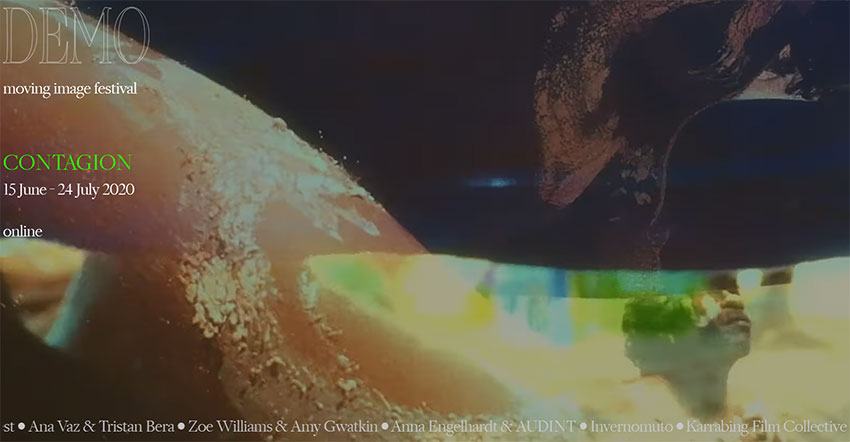 The Finnish Cultural and Academic Institutes’ Together Alone project are launching today DEMO contagion, a commissioned online moving image festival, whose aim is to address the topic of Contagion through a series of works by moving image artists and researchers. Under the direction of Taking the current Covid-19 crisis as a starting point, the notion of Contagion will be explored as an aesthetic and political paradigm with a series of screenings, newly commissioned special projects, and a reader will be presented on DEMO’s online platform.

Artistic director Felice Moramarco and curator Caterina Avataneo prose that the fundamental distinctions on which our political order is based – national borders, socio-cultural differences, and even the separation between humans and other animal species – have thus appeared to be totally fictitious. A system so far considered unchallengeable has been irrevocably revealed in all its vulnerability. Besides being the way in which viruses proliferate, contagion manifests itself as the true dimension of human coexistence; a dimension which crosses boundaries and unfolds through propagation, rather than a linear progression.

The idea of connectedness comes into play through a reality configured as a network of interdependent agents, that inevitably undermines human pretensions to occupy a privileged position in the cosmos. If we want to redefine our relations with what surrounds us, acknowledging our intrinsic vulnerability and absolute dependence from a plurality of human and non-human agents, has to become the principle of our political action.

The online platform, designed by Pekka Airaxin, will take the form of a virtual space where the various works presented will be arranged in a constellation order, to facilitate the dialogue among them. The platform will function as a narrative environment, organised around three main sections: films, special projects and reader. Each work will be presented individually and will be available for a limited period of time.

In the film category, some highlights include Ana Vaz & Tristan Brera will present A Film, Reclaimed a conversation, an essay that reads the terrestrial crisis under the influence and with the help of the beautiful and terrible films which have accompanied it. Jenna Sutela, with Holobiont, will consider the idea of embodied cognition on a planetary scale, featuring a zoom from the outer space to inside the gut. The video documents Planetary Protection rituals at the European Space Agency and explores extremophilic bacteria in fermented foods as possible distributors of life between the stars.

Remarkable form the special projects as well, there’s AUDINT & Anna Engelhardt’s Protocols of Immanent Conflicts. A newly commissioned collaborative multimedia project, it brings together speculations on systems of holographic warfare and research on logistics as a colonial strategy that lies between a dichotomy of military and civilian. It will feature Steve Goodman’s Touching Nothing, Defasten’s Ghostcode, as well as Anna Engelhardt’s Adversarial Infrastructure and Colonial Sediments.

Over the saturation of online events and digital explorations of the pandemic, DEMO are provisioning a model that feels enticing for both its aesthetic and conceptual approach. With a careful selection of works, also not too overwhelming in numbers – DEMO will bring a fresh look at the pandemic’s political, social and economical challenges.