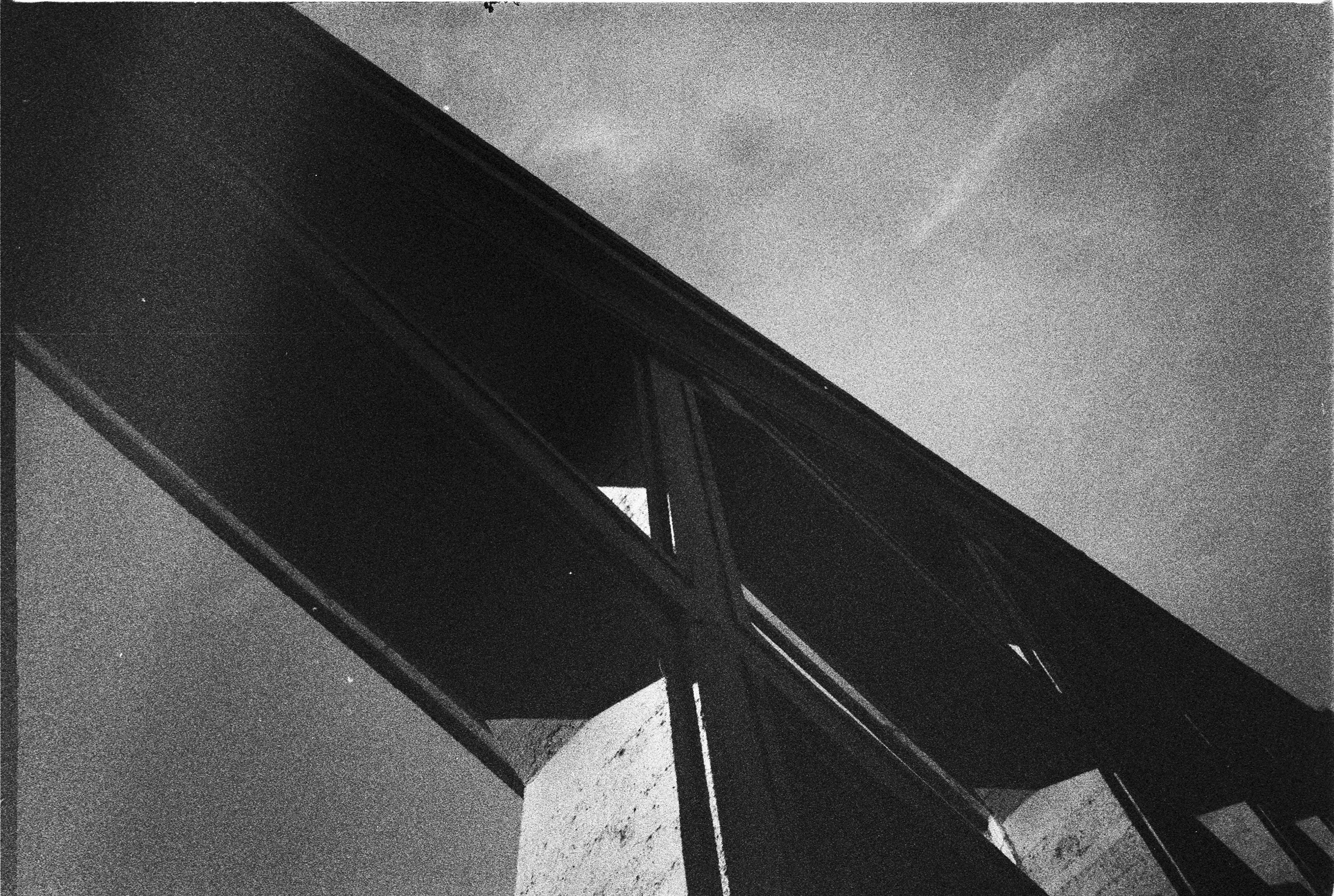 What happens when Soundwalk Collective’s member Simone Merli – whose collaborations include outstanding artists such as Patti Smith, Nan Goldin, Lyra Pramuk or AtomTM – connects with Luca Calo, a veteran from dozens of capital labels that produced ambient gem releases, and heavily engaged with DJ drone music and industrial spaces? A new, fresh outlook on ambient music from a wide-angle, matched with a disruptive record brand that jumps on the market to cover an unexplored range of sound territories.

The two artists define the music label Concentric as a multidisciplinary project, aiming at digging into a library of sounds that is free from identity classifications or definitions, an influence that comes through a sense of deepened collectivity. Luca and Simone share about their blueprint as a chance to cherish original collaborations with brand-new artists, extending their net through a hybrid, blending process of amalgamation. A source of nourishment, as they call it, that is literally food for our ears – and classifies the unclassifiable.

The work at Concentric is branched into two sections: Luca is the active researcher, Simone takes care of the aesthetic part and the production side. The scope of the label is focused on a specific mission: to move away from the idea of ambient designated to remain stagnant in its own category. Their vision of the genre is more fertile, trying to elevate thorough enrichment that comes from an ongoing sound investigation.

Anywhere (from field recording-based compositions and narrative pieces to industrial textures and physical sounds to vivid melodies, solar tracks, and sung vocals), no matter how abstract, dark or indefinite, the duo wants to be able to provide listeners with a unique and intimate journey to the core of the genre, allowing them to play along with each track.

And since January, we have had a chance to give heed to Colliding Wind, the sixth compilation which is currently sold out ut available to listen to on Bandcamp. The album is part of an introductory release trilogy, an impeccable production where Dvorák’s samples by Christina Vantzou alternates the IDM movements of Etapp Kyle and an audio installation edit – dense of nature reverberations – from Jana Winderen. The title refers to a binary star system where the two massive stars emit powerful, radiatively-driven stellar winds, producing radio emissions.

Their entire trilogy aims at mixing profane and sacrilegious, emerging and more established artists in a unique continuum that refines the final product: we spotlight the names of Enrica Falqui and Tobias, but the rest of the list is top secret. And we love that the duo’s quest is certainly to continue along this path –  unencountered voices that add new creative layers and perspectives, contributing with projects like the World Ocean Day and with Vienna’s TBA21’s gallery.

The label puts his lenses on the aesthetic value and target images as well as sounds: the collaboration with photographer Alessio Boni transforms the album covers in analogic introspections, bringing memories to a rather idyllic and perpetual state – that same peace that is evocative of the work of the two artists design in their electro-sound experiments. Their final aim is live performance: sounds and colours will find their way in a series of live projects that will see the light of the day later this Spring.

Concentric is a work born for the ears that want to become a physical experience in 360 degrees – where live, direct communication is the final word: the label is a certainty that will offer us more than original turns in the coming years.

How was concentric born and what were the main aims behind it?

Concentric Records is a multi-disciplinary record label exploring new music that transcends identity and definitions and is inspired by a sense of collective movement.

The label was born in quite an organic and impromptu way. Luca has been running various labels since 2015 and had the desire to venture with more intention into ambient music. Much of his practice as a DJ / performer is about drawing long narrative journeys through drone music and industrial spaces. He tends to go very deep and reach an intimate and emotional place. He is also great at researching music and has a very unbiased and pure ear when it comes to discovering new artists.

I also have been playing with the idea of giving birth to a record label for quite some time. This comes from the desire to express artistic ideas without being creatively involved as an artist/musician, and with the interest to explore more intimately music and sound of a different nature than what I realise in my daily practice with Stephan and Soundwalk Collective. This also gives me the opportunity to find other sources of inspiration and to nourish new collaborations with artists I wouldn’t necessarily get to know otherwise.

The label’s aim is to explore ‘ambient’ via a very wide lens. We are interested in all that exists on the fringes of genres and that is not easily classifiable; and by all paths generated from intersecting musical ideas and collaborative working processes.

What are your roles running the label and how do your different backgrounds and personalities play a part in it?

Luca is certainly more of the ‘A&R’ – if that term still exists. He is constantly listening to new music all around and is often proposing ideas for future releases or mixes.

I am more on the production side of the label, due to my OCD nature and being fixated on details. It also turns out I can realise visual artwork and graphical layouts.

Ambient seems to be experiencing quite a bit of popularity these days (not only in music but also in fashion shows and other art forms). How do you see your label contributing to the experimental/ambient current scene?

‘Ambient’ somehow has an under-represented and misinterpreted nature. Stereotypically associated with calming / meditative music and sounds of nature, or with drones and dark, eerie spaces. The term is somehow so simplifying that some artists who produce music along those lines at times prefer not to be associated with ‘ambient’ as a term.

On the contrary, our desire is to explore and promote its layers and depths in all its sonic forms. The label’s releases span anywhere from field recording-based compositions and narrative pieces to industrial textures and physical sounds to vivid melodies, solar tracks and sung vocals. No matter how abstract some of the material may be, the intention is to always flirt with a deep sense of musicality and skilful compositions, and be able to provide listeners with a unique and intimate journey.

The introductory release of the label is a record in three parts that feature a wide range of works from established pioneers as well as emerging talents; what attracted you to their music? What was the overarching idea/concept for the 3 parts and were there any individual ones for each part?

Essentially we wanted to present a wide range of works and sounds, in order not to be defined by the work of one single artist as a first release. We wanted to open the possibilities of conversations and collaborations from the start and have the opportunity to feature emerging artists alongside more recognized musicians to provide them with more visibility. We also wanted to create bridges between them, and point out the connecting points between pre-existing practices and purely emerging ones.

As well, we wanted to do this on vinyl, as we believe in the art object as part of the artistic process and listening experience. The duration on vinyl is thankfully limited for the sake of a higher-quality listening experience, one more reason why we produced a 3-part release in the beginning and take the opportunity to create 3 individual journeys in one. The visual artwork connects all the three parts quite seamlessly and includes words, informative notes and comments from each featured artist on their own compositions.

Could you tell us a bit more about the next releases?

We are excited to currently present the first strictly-ambient release by Tobias. (aka Tobias Freund) as our first solo LP of Concentric Records, literally just out in the shops. Recently, Tobias has expressed the desire to delve into more ambient and experimental work and expand his artistic journey and process. He produced a wonderful and very particular 8-track album inspired by the ‘movies in one’s head’. Each track is paired with a text he wrote, which we won’t know whether it derives from fiction or reality or both.

We are also working on a very exclusive studio collaboration between Enrica Falqui and Aimée Portioli (Grand River) including special artwork, for later in 2022; and a new digital compilation featuring wonderful artists coming from very different musical careers, unfortunately, we can’t reveal details yet, do stay tuned close to the Summer.

The visual aspect of the label is very prominent as well. With photography curated by Alessio Boni who contributes with his collection of photography (reminded me of the work of Jon Wozencroft for Touch). Could you tell us more about how this visual aspect is envisioned?

The visual world is very important to us. Music and sound are evocative of images, lights or colours, and vice versa. Alessio Boni is a wonderful artist and dear friend based in NY and Paris, working in both fashion and art photography. All his artwork is shot in analogue, his images are structural and physical, but also evocative of an intimate human or mental space. Someone once said that to be a good image as you keep looking at it, without ever quite having enough of it, and this is how I feel about Alessio’s work and why we think it connects so strongly to the music in each record.

You’ve also recently collaborated with Vienna’s TBA21 for the World Ocean Day 2021 (TBA21 has a very strong sound art programme). Are these types of collaborations something you would like to regularly get the label involved with? And if so any already planned or in the coming future

100% yes. Music/sound forms and contemporary art have many connecting points, and also have the opportunity to amplify each other and build with each other. They have the power to evoke, inspire and be accessible together. The World Ocean Day program was produced for our monthly residency at Refuge Worldwide – a wonderful Berlin-based community radio with a mind-opening and inspiring program – it is the perfect platform for such kind of collaborations and initiatives, they have been extremely supportive and reactive towards this Ocean Day project together.

Our Ocean Day program was essentially inspired by ‘freq_wave’ – a project commissioned by TBA21–Academy, and curated by the wonderful Carl Michael von Hausswolff, inviting 84 sound artists contributing to a web-based interactive collaboration bringing oceanic creativity to the fore. A spontaneous act of solidarity to bring attention to the delicate soundscapes of the sea. Following this inspiring thread, we connected with TBA21–Academy and Carl Michael himself, to curate this initiative together.

The intention is certainly to continue along this path – there are so many relevant mind-changing topics that we have the opportunity to approach and explore through the voice of many wonderful artists and people who think alike. We are working towards a few collaborative projects centred around live performance events, we’ll be able to disclose specifics later this Spring.

Where would you like to see taking Concentric into?

Certainly into curated live events. No message or idea is transferred and communicated as powerfully and directly as it is in physical form and in person. In the end, it is mentally and physically together that we, as humans, can truly make a difference.

In times of complete digital and screen immersion, how do you cope with digital overload?

By taking the eyes off the screen and engaging with the physical world and its wonderful inhabitants.