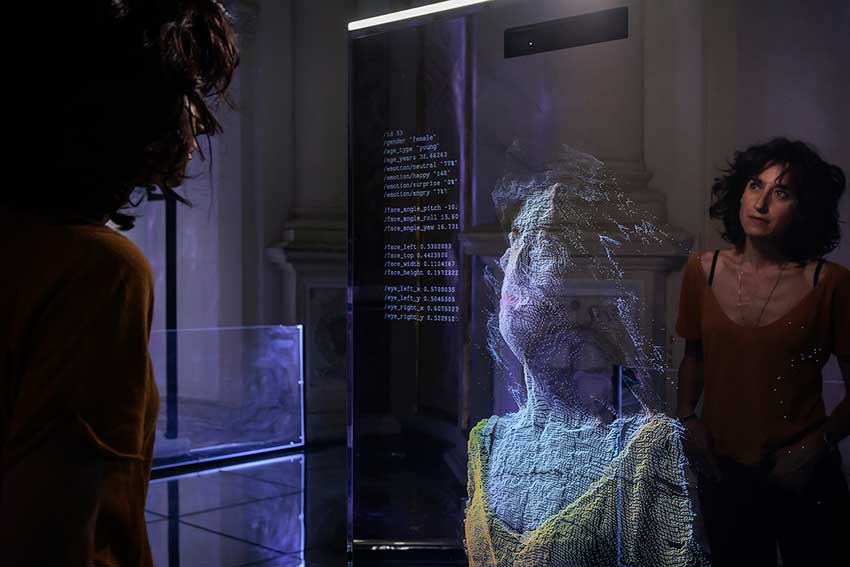 This summer is seeing the 62nd instalment of the Festival of Two Worlds in Spoleto, Italy. Founded in 1958 as an opera festival, the event has since expanded to include other forms of music, drama, dance, and the visual arts. During the 2019 edition, from June 30 to July 14, the Italian interactive design studio Ultravioletto is curating a highly topical installation: Neural Mirror, a pioneering work that incorporates artificial intelligence and robotics, will be exhibited in the hallowed halls of the Church of Santa Maria della Manna d’Oro in Spoleto.

Ultravioletto is an interactive design office that works with emerging technologies. They are interested in research endeavours that enhance the human experience.

Neural Mirror is one of such endeavours and is promoted in partnership with the Carla Fendi Foundation. The installation questions the future of humankind in light of questionable technologies such as AI. Focusing on visual reflection, Neural Mirror requires patrons to stand in front of a computer-mirror interface, where their bodies are scanned and worked into a cloud of points by a computer algorithm.

Before their very eyes, their physical identity is transformed into a flow of information. This virtual avatar is then converted from immaterial to physical data as information is printed in writing.

The visitor’s identity transitions from corporeal to computerized abstraction, perhaps a necessary consequence of the integration of AI into everyday society. This forces the viewer to reflect not only on themselves in physical, “real-life” space, but also in digital and temporal space, as the semantics and repercussions of intelligent technologies in a volatile world must be considered.

TERRA0, enabling the forest to become an autonomous economic agent