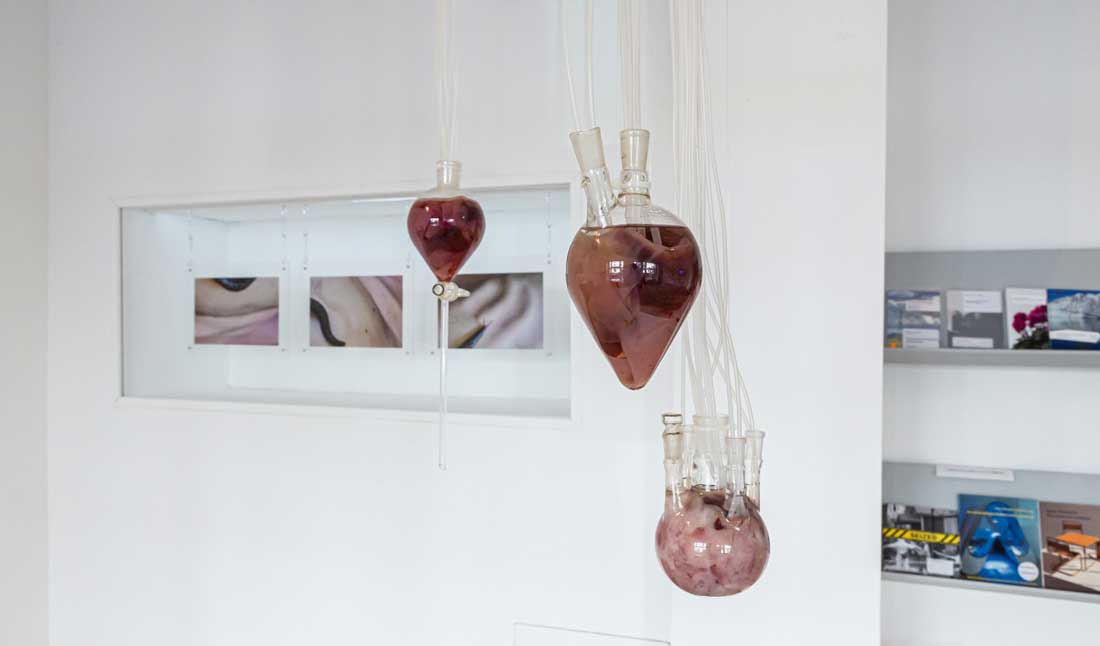 Donna Haraway introduces us to the Camilles in the final chapter of “Staying with the Trouble” as “one of the children of the compost who ripen in the earth to say no to the posthuman of every time”. These ‘children’ are entities emerging from both speculative fiction and philosophical reflection to embody a new transgressive identity in a world where humanity no longer can survive and reproduce on its own. Instead, the Camilles have found new ways of relating to non-human others through the storage of the DNA from endangered organisms in the Camilles’ genome. As the Camilles takes on these genetic components through the process of ‘becoming-other’, Haraway charts the downfall of humanity and the creation of new myths and stories to once again breathe life into a dying planet.

Haraway’s narrative has formed the conceptual ‘humus’ that has nurtured the growth of Art Laboratory Berlin’s exhibition and symposium THE CAMILLE DIARIES: New Artistic Positions on M/otherhood, Life and Care.  Bringing together eleven artists to explore the genetic and biochemical exchange between human and non-human, Art Laboratory Berlin has curated the works with the aim of directing its audience’s attention to other living beings while all things human remain in their visual periphery.

Art Laboratory Berlin Co-founders and curators Christian de Lutz and Regine Rapp have worked to extend these collective contemplations on human and non-human relations through their one-day Symposium to take place on the 26th of September 2020. By inviting the individual artists, guest scholars from the humanities and the sciences (biology), and the audience to reflect on both the artworks and the stories that humanity is actively creating. The Symposium also sets out to consider how our current planetary conditions impact the survival of life on the planet.

The exhibition itself weaves together a multitude of perspectives and multi-species relations. Featuring the works of Sonia Levy, Mary Maggic, Naja Ryde Ankarfeldt, the artistic duo Baum & Leahy, Špela Petrič, Margherita Pevere, Ai Hasegawa, Nicole Clouston, Cecilia Johnsson, and Tarah Rhoda, THE CAMILLE DIARIES also commands its audience’s attention to the examination of the placement and aesthetics of care of its non-human actors. From different types of algal species in Baum & Leahy’s work Mammalga, the bio-remediating fungi of Maggic’s work Milik Bersama Rekombinan, and to the documentation of caring processes for endangered coral species in Sonia Levy’s  For the Love of Corals, the exhibition emphasises the use of caring systems involved in co-creating these multi-species stories.

A common recurring theme of the works is the notion of “co-mothering” non-human entities. Stemming from feminist philosophical thought and transformed by the perspectives of the many femme and non-binary identifying artists, the notion of “co-mothering” entangles the artists’ human bodies with the care systems and biochemical processes of these non-human others. Artworks such as Pevere’s Wombs features living bacterial colonies growing in liquid environments that have been infused with Pevere’s hormones, Petrič’s Phytoteratology displays embryos of the plant thale cress that have been grown in a “bath” of chemicals from Petrič’s body, and Ai Hasegawa’s I Wanna Deliver a Dolphin speculates on the process of a transspecies gestation and birth of the endangered Māui dolphin.

With the rate of mass species extinction around the world, the destruction brought upon by the impact of the climate crisis, and the dangers of pollution caused by industrial modes of production, humanity’s current relationship with the environment and non-human organisms can be seen as anything but caring or m/otherly. These hall-markers of catastrophe define our current geological period of time for the planet. Haraway labels these epochs the Anthropocene, Capitalocene and Plantationocene according to the impact of different human systems on planetary resources and non-human lifeforms.

By creating new stories and narratives about caring for human and non-human life, the artists of THE CAMILLE DIARIES are in turn enacting the call to action found in Haraway’s text. The creative and transformative potential of these relationships is also represented in the exhibition through artistically synthesised artefacts such as Clouston’s Mud (Berlin) featuring the organisms living in mud from different areas of Berlin and Brandenburg, Jonsson’s HAEM made in collaboration with scientist Rodrigo Leite de Oliveira featuring compass made from the iron derived from 69 donated human placentas, and Rhoda’s Ourglass exposing the aesthetic and biochemical similarities of haemoglobin and chlorophyll.

At the conclusion of the final chapter of “Staying with the Trouble”, Haraway articulates a key point about how humanity interacts with both human and non-human others. “It matters which concepts conceptualise concepts… It matters which worlds world worlds. It matters who eats whom and how.”

To creatively imagine a future in consideration of the current conditions of our planet, Haraway reminds us that the way in which we embed ourselves within the planetary systems and interact with our co-habitating organisms matters. Because it is upon these actions and visions that will in turn give rise to our emerging future.

You can watch the video of the symposium here. 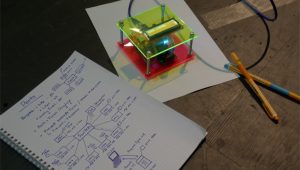