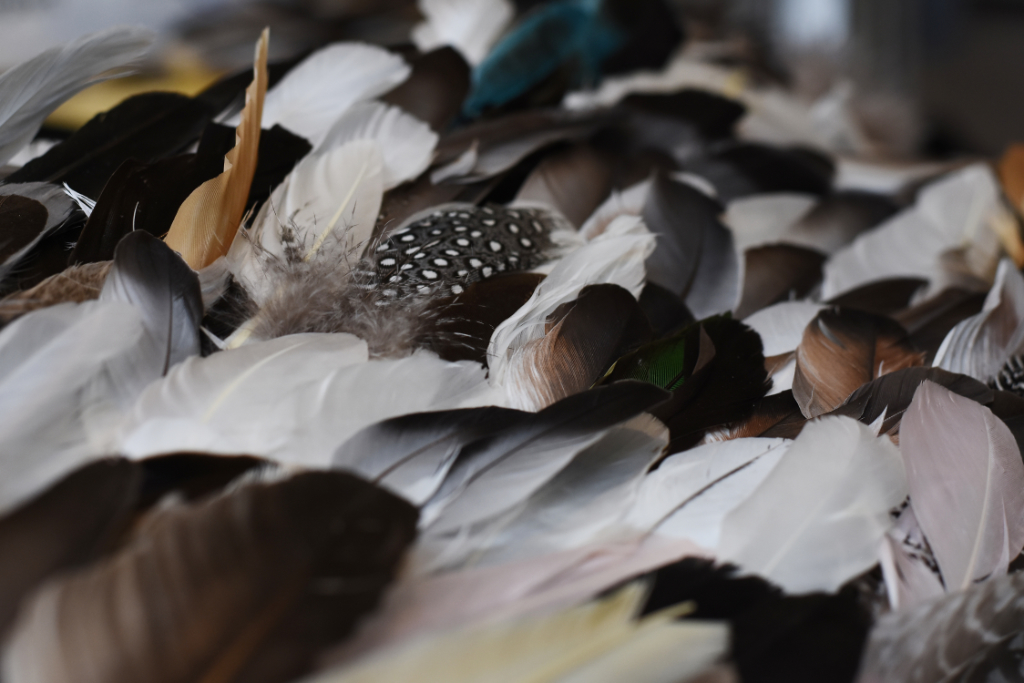 Stirred by an intense and inner drive towards a rituality that may have partially lost its permanence in present-day society but retains an ingrained need in human nature, the artist Rebecca Lenaerts invites us to embody this understanding and awareness with her performance Still a bird.

Through the repetition of actions or gestures, movements or linguistic sequences, rituals are symbolic events of shift, suspended states under which a heightened communication is expressed. Despite the passage of time and its moulding effect on culture, they persist as universally recognisable events and are engraved in our daily dealing with life. By enhancing the symbolic sphere of our existence, rites enable a condition of profound communion and sharing.

A ritual is a sequence of actions performed with the purpose to create unity; either with oneself, between people or between humans and all that exists. If done with consent, intention and focus rituals are like portals; they initiate transition in life, suggests Lenaerts. Getting more specific on her performative work, and leaving aside the merely religious perspective with which rituals are often directly associated, she affirms: Still a bird arose from the silent wish to disappear and the strength that is needed to stand up again after a deep fall. When I perform, I embody this process of appearing and disappearing. […] In a ritual, we can touch something hidden in the unconscious. We go to a place that is mysterious, unrevealed and sacred. That is where healing can take place. By honouring a painful experience through ritual, something of the pain of that experience finds its place where it can transform into something new. It is like rewriting your own story, your personal myth. So every time I perform is different and thus in constant transformation.

This tension between appearance and disappearance mentioned by the artist lies at the heart of this piece. The physicality of action and the imaginative potential of the mind merge in a silent but synergic exchange.

The very conception of the performance is born with an intimately personal ritualistic overtone and yearning for renewal. The artist began collecting birds feathers in 2015 along the streets of Berlin as an act of healing and listening, exploring oneself in connection with the outer world and its more or less visible manifestations. These organic remnants detached from different flying living creatures and left as meaningful traces from time have for her the function of gateways to a further dimension.

When a feather falls to the earth, it is believed to carry all of the energy of the bird it came from, and it is perceived as a gift from the sky, the sea, and the trees. Feathers may arrive unexpectedly, but not without a purpose. Each type of feather represents something different. I started collecting feathers when I was in a period of grief and transition. During simple walks in the streets, I collected feathers that crossed my path. I found reminders in them to be soft and gentle with myself. Collecting, washing and conserving feathers became a ritual in my daily life.

The performative act is closely connected and inherent to the notion of rituality; therefore, this combination and the emerging of the mythological entity of the Birdwoman associated with the feathers have led the artist to the realisation of a tangible work with a shamanic touch. Specifically, the artist sewed together feathers to form a cloak to wrap herself in during her intervention. The lack of certainty about how this indument would affect motion led the artist to evolve an utterly introspective dance, guided by a loose and spontaneous interpretation.

In ancient myths, the hybrid figure of the Birdwoman was meant the gatekeeper between the animal and human world. The conjunction of distinct realms fuels the idea of fluidity and transcending boundaries that define predetermined categories led to the genesis of the performance. Lenaerts practices a piece that brings into dialogue theatre, visual arts, and Japanese Butoh, or Dance of Darkness. This last is a performance art form developed starting from the Japanese avant-garde scene of the ‘50s.

In Japanese Butoh, it is said that the performer moves from within. The performer connects with the deeply embedded knowledge of the body, shaped by environmental information, imagination, history and trauma. The body contains a story that resonates through movement. So Butoh is, in essence, a practice of deep listening. A lot of Butoh performances are slow. Slowing down allows the body to feel and capture in detail and then to move with this information. The silence and slowness can be extremely challenging for some spectators. But, on the other hand, it is an invitation to enter an experience. […] What you see, what you feel, hear, imagine melts together into a personal story. The performer is only a trigger. A medium. In Butoh Dance, there is no storyline: the body is conceived as an archive of sensory layers, and it becomes itself a work of art embedded with a knowledge to be expressed and shared with the audience.

In Still a bird, the personal and the core are staged, activating a process of intimate reconstruction that requires the essential intertwining between body and mind. It is a work that seeks to shed light on the idea of authenticity and to become integrated, leading to the performance genesis Growing and evolving within oneself and in unison with the surrounding environment is a stimulus to reaffirm physical awareness in a world where it reveals itself numbed by the pervasiveness of misleading virtuality.