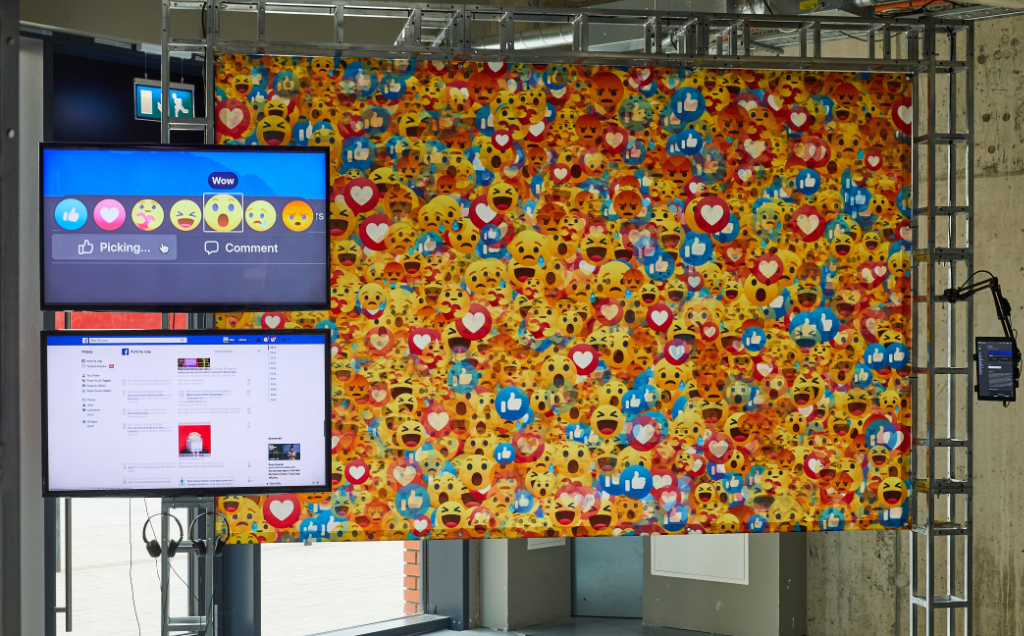 arebyte Gallery (London) are showing  Software for Less, the first UK’s solo show by Ben Grosser, the US-based artist/scientist/coder, who started as a music composer and questions curiously: Especially in this pandemic era full of even more computer use, what might an opportunity to “get less” reveal? And how might we see the recent software-inflected past differently if we could look at a direct comparison between Mark (Zuckerberg)’s obsessions with more and his apathy towards less. The exhibition presents a visitor with a reality-adjacent tech-expo where Ben is the brand, and his works are the products, in curator Rebecca Edwards’ words. Ben Grosser describes these artistic platform interventions as: software recomposition, a strategy of recoding existing software systems in ways that let myself and others see/experience them anew.

The exhibition is centred around the new work Minus, an experiment to see what happens when the big social media model of more is turned on its head. Working on limiting users participation, Minus is a social network where users only get 100 posts, encouraging the participants to imagine the situation when the social media platforms would not need the users as much as they profit from their data now. Platform Sweet Talk has also been commissioned and specially created for the current show. The work examines the grammar used in messages on social media and investigates how their structure influences the users’ behaviour. According to Ben: To exist in the digital is to be in “conversation” with notifications. The artist has devised a unique interface that presents the messages in a depersonalised form, highlighting the statements as empty carriers of our data, which are used against us to maximise our engagement online.

Dedicated to extensive examination of the cultural, social, and political effects of software already, during the pandemic, the artist has come up with new perspectives and ways of questioning software’s role in the contemporary moment, foregrounding social media platforms on view at the moment. Stemming from the older artworks Get More and ORDER OF MAGNITUDE, the newly commissioned Get Less and DEFICIT OF LESS take into account their predecessors’ surprising scope of what Ben has recently found out. For example: With little formal exhibition, Get More has been reloaded to increment its counter 300k times. Reflecting on the most recent experience of lockdowns, Ben admits: Though it was a time clearly marked by a certain amount of more (more computer, media, and social media use, for example), it was also a striking moment of less. Less routine, less obligation, less opportunity, less noise.

When we asked curator Rebecca Edwards about the curatorial process and what these newly created works have added to the artist’s existing research and work with software, Rebecca said: The commissioning process for Ben happened very organically. Ben was already working on a number of yet-to-be-released works in progress. So we felt that the right moment for release (or re-release in the case of Go Rando and Facebook Demetricator) of these works was in conjunction with his solo at arebyte. These are works that aim to provide alternatives to Silicon Valley norms. These include a step away from incessant advertisement, notifications, and functionality that can be seen in the new work minus, which provides an alternative social media platform. Some works seek to lift the lid on the ways these platforms vie for our attention and keep us within them; others are critical of the language used. All the works in the exhibition interrogate and reimagine how software is created, operated, and sold.

The exhibition at arebyte offers the viewers an exceptional opportunity to find out what goes behind the process of Ben Grosser’s work. During Software for Less there will be live-coding sessions giving the audience an insight into how the artist re-programmes certain parts of the code present in the social platforms already. The artist explains, If Facebook or TikTok or Twitter makes a change, there’s a good chance that it might break my work. For example, Facebook Demetricator has been rewritten several times since the artwork’s release in 2012. This process will be on show, and Ben will rewrite the work during a series of live coding events broadcast on Facebook and in the gallery. In the case of an older piece, Go Rando a web browser extension that obfuscates user’s feelings on Facebook, finding a solution to fix it after Facebook made some significant changes was a real challenge in itself. Thanks to the curatorial support at arebyte, the artist has rewritten this work specially presented it in the current show.

Even before entering Software for Less, how the visitors are given a chance to realise which option attracts them better: more or less. Then, moving on, the space is populated by synchronised videos of 47 minutes of Mark Zuckerberg expressing his obsession with ever ‘more’ and slowed down shots of his seldom mentions of ‘less’, creating a cacophony of binary sonic scenarios of two different realities, one preoccupied with incrementation and the other with slowing down and loss. The visitor is encouraged to imagine where we would be now if we left the focus on increasing openness and connectedness behind. Ben Grosser proposes: Until some radical changes happen, we will continue to be stuck contending with platforms that are always trying to dominate and manipulate us. Developing our critical lens and staying experimental is our best path through this time.

Website https://www.arebyte.com/
(Images courtesy of the artist and arebyte Gallery)