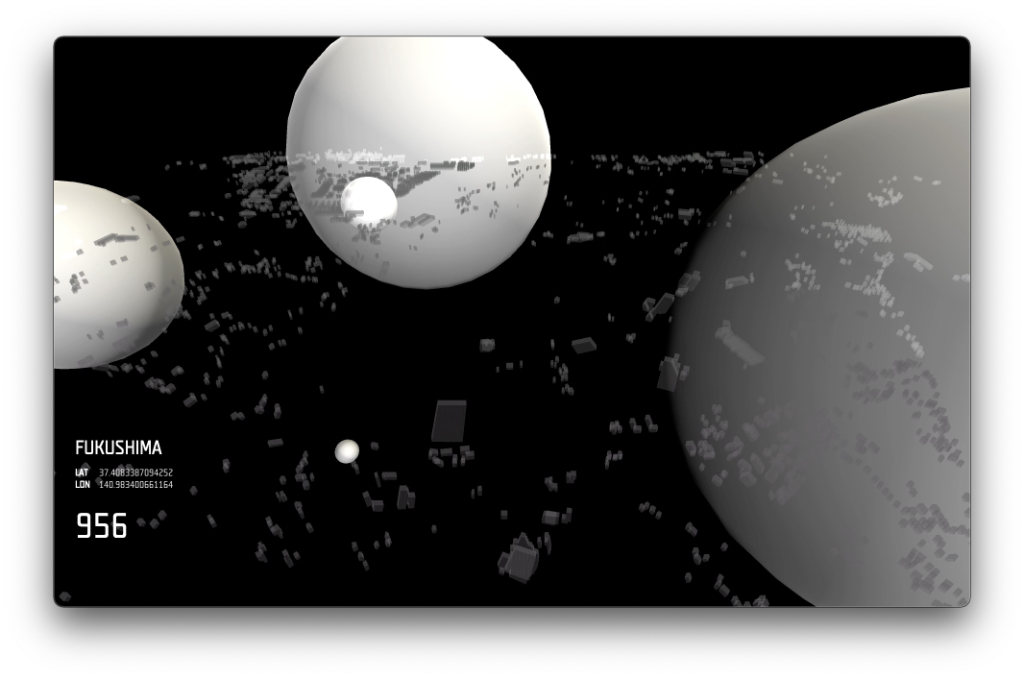 RadianceScape Live! is a work by the artist Chris Cheung in collaboration with a selected team including Jacky Lau, Daniel Stempfer, Kwankai Yin, Dominik Kautz, Ryuichi Sakamoto, Norika Sora and KAB Inc. that consists of an audiovisual performance focusing on the theme of radiation. The subsequent impact of such a phenomenon on the environments inhabited by humans is what this project intends to present to the public.

However, it should not be regarded as a geography-based project, but rather, departing from tragic historical events and relying on specific locations as analytical references, it seeks to raise awareness around a dramatic theme supposedly overlooked.

The work by Cheung – otherwise known with his artist name h0nh1m and internationally recognised for his practice centred around the relation of electronic, sound, image and creative technology with new media – is a long-term project that went through a careful and gradual incubation period. The seed for its development looks back to 2014 with a piece entitled RadianceScape, which is further implemented with RadianceScape 2016. Therefore, the work is meant as an additional extension of these previous interventions; both originated from a reflection on the Chernobyl nuclear disaster and the most recent Fukushima accident with the resulting release of radioactive emissions.

In 2014, the purpose was to materialise an audiovisual representation to compare the radiation level present in Fukushima and Hong Kong. At a later stage, RadianceScape 2016 was born instead as a data-score installation. The sound and visual elements composing the piece were generated through the latest radiation data set from a global sensor network named Safecast.org. And set for gathering and sharing those discrete measurements.

As the artist explains, the newest performative result achieved with RadianceScape Live! is intended on the going – as the title itself suggests – since it visualises and shows live radiation data coming from several major cities such as New York Tokyo, Hong Kong, Berlin and Paris. While confronting the outcomes with the data of Chernobyl and Fukushima, the work offers dataset instantaneously caught in their processing and, thereby, potentially always different in their appearance.

The sheer invisibility of the radiation, which is perhaps best understood as a lack of recognition of its actual presence and lucid consciousness of its effects, is the counterpart to an immersive work marked by a synaesthetic approach. Lights and sounds activate sensory contamination in the viewers confronted with an all-encompassing perceptive experience that makes visible what eludes our sight.

Radiation is a kind of γ-ray having super strong penetration energy, and yet it is invisible. Through a laser machine, I wanted to establish a connection between the radiation and its devastating energy. With the electromagnetic sound sampling and through the sound of “Tsunami Piano” played by Japanese composer Ryuichi Sakamoto, I wish to show the hidden messages and signals coming from nature. What we can learn is to rethink the concept of coexistence on this planet, says Cheung.

These γ-waves are enormously harmful to humans, but we cannot distinguish them with the naked eye. The laser scanning technique pervading the ambience designed by the artist is used to sensorially build the dialogue between space and radiation data. Different tonal beams and noises are generated based on the detected radioactivity. Sound samples are also caught with an electromagnetic field detection device instructed to produce a sonic alert for the inaudible energies unfolding in the space.

A dark environment traversed by glowing streams of intense colours, simultaneously fascinating and somewhat dystopian, is the one destined to receive the spectator. However, as the artist clarifies, it is not merely an aesthetic choice that directs his practice: It’s not about the aesthetic I want to create or force myself to present. In reverse, I always try to find the most primitive and direct way to spot a reality. And maybe this is the beauty of the truth.

And it is precisely the desire to understand the truth and the mechanisms that regulate our reality, concerning the political agendas ruling over our lives, that seems to be one of the main drives at the onset of RadianceScape Live!. Without proposing solutions to the complex and multilayered issues that society constantly poses to us, the wish is to increase awareness around matters often overshadowed by the media’s strategies and investigate alternative positions through artistic language.

The spirit underlying this project also touches partially upon the power of memory. Cheung’s work is linked to events from the past. Still, the gaze is turned on the present so that the intensity of traumatic events shaping our history could be redirected towards a renewed force: If we treat memories as data, bad memory always takes a deeper part. […] With the RadianceScape project, I hope to visualise and propose the data honestly and realistically. I believe this is a way to let people face the issues bravely and support them in walking out from the painful memories.