Insight: Rachel Foley’s ‘Technocratic Birth’ and the future of reproduction

Rachel Foley is an American designer exploring the intersection of emerging technologies with our existing social, economic, and cultural systems. Through design fiction, realism, film, and storytelling, she develops provocative near-future scenarios that aim to promote nuanced debates about humanity’s relationships with technology.

Her bachelor’s degree in Science at the Rensselaer Polytechnic Institute as well as her experience in the health tech industry, where she worked as a consultant and project manager before pursuing a career in design, now fuels her insightful understanding of the tech industry which she applies to her current design practice.

Foley holds an MA in Material Futures Master’s degree from Central Saint Martins, which she had obtained for her Technocratic Birth project. Within the project, she aims at unpacking the preeminent question: “Will emerging reproductive technologies empower women?” for our current times when big companies have begun offering egg-freezing benefits to female employees and artificial wombs promise to liberate women from their reproductive duties. Through documentary film, realistic content, and short stories, the project investigates the motivations, anxieties, and vulnerabilities that may drive us to the complete medicalization of birth.

Besides her own design practice, Foley is currently also working as part of the London-based design duo DEBUNK collective alongside fellow designer Maël Hénaff. The collective has exhibited its Deepfake Propaganda For Social Good project as part of the Tate Moderns’ Exchange 2019: School For Civic Action At Tate Exchange. The premises of the interactive installation was to enable the visitors of the event to code their climate change demands into an open-source system. Next, the design duo brought the demands expressed by the public to life via the readily available deep fake technology and gathered them into a final video, which has been made available on YouTube. The main aim of the project was to attract people to the cause of climate change, currently being advocated by the Extinction Rebellion network as well as demonstrate the power of individuals and local communities to advocate for global progress.

As our current day society fails to understand and analyze what we are experiencing on a cultural scale due to the unprecedentedly fast speed at which discoveries of complex technologies are being made, an increasing amount of designers seem to have taken a more critical approach to their practice to mirror this phenomenon. The common motivation behind the variety of different creative practices, such as Foleys’, is to explore how design can be used as a tool to encourage government, industry, and the public to collectively shape our increasingly complex world.

For our audience that is not familiar with your work; could you tell us a bit about your background, interests and inspirations?

I am a multi-disciplinary designer and futurist exploring how emerging technologies affect people. Along with my design partner, Maël Hénaff, at DEBUNKcollective we seek to uncover the absurd in our increasingly complex world, examining technologies like AI, machine learning, and biotech to create provocative, relatable scenarios that inspire interaction and conversation. Before founding DEBUNK, I completed my MA in Material Futures at Central Saint Martins, where I was exploring fertility tech, the societal pressures on women and their bodies, and the language used to promote egg freezing to women. I care a lot about digging beneath the hype, beneath the obvious and surface-level perceptions to try to understand the human impact of progress and help put the path of progress back into the hands of the people it affects. A lot of this stems from my time spent in the health tech industry, where I worked as a consultant and project manager before pursuing a career in design. While I am a strong advocate of technological progress, I believe that positive social change must prioritize issues of access, power imbalance, and choice.

Technocratic Birth and Prosthetic Womb are two speculative projects whose intellectual process lies on ‘a promise of complete control and liberation for women from the unpredictable and dangerous condition of pregnancy.’ What were your main aims behind these projects?

These projects had very personal beginnings. As a woman in my 30s, I was feeling increasing internal and external pressure around my reproductive choices and felt overwhelmed by the fleeting nature of fertility that seemed at odds with my life goals. I had heard about companies like Apple and Facebook beginning to offer egg freezing services to their female employees, and more and more of my friends had begun talking about egg freezing as a viable option for delaying motherhood to a time when we’d be ready for it. The language around these technologies, which were considered experimental only up until a few years ago, is all about empowerment, but I was curious whether these technologies could really deliver on their promise of reproductive liberation. Prosthetic Womb was a response to the quantified self-movement and our treatment of the human body in Western medicine as a quantifiable entity to be manipulated and controlled. I presented the work as a speculation about a closed-loop system of fetal monitoring and our desire for control over reproduction, and what I learned was how afraid women were of having their bodies change during pregnancy, of how afraid they were to lose control. This ultimately led to my initial research question for Technocratic Birth, which asked whether we should adopt pregnancy for our culture of convenience and control. In the end, my question to the audience is whether it is our bodies or our work and convenience cultures that need to change in order to liberate women from the societal pressure on their reproductive lives. The projects are meant as tools for nuanced conversation around reproductive choice and the promises of technology in work culture that’s only now becoming more welcoming to women and mothers.

One of your latest projects is a short documentary about an experimental and speculative pregnancy procedure that grows a baby externally from an at-home skin biopsy.  In this documentary, you explore and debate about humanity’s relationships with technology and ourselves. What did you expect from the audience and what feedback did you get?

In a way, I expected the audience to be divided in their response given the current debates around women’s rights. As a narrator, I remained fairly neutral to try to encourage people to watch with an open mind and leave with their own questions and reflections. Certainly there were people who were either very for or against artificial wombs as a future technology. However, I purposely did not show the artificial womb in the film because I did not want it to feel too sci-fi, speculative, or divisive. Instead, I wanted to draw out the human reactions to the expectant mother’s experience and to find ways to connect the characters’ motivations and anxieties with our own realities. I would say that in one sense this worked, as an overwhelming majority of people I spoke with felt deeply for the mother sat in the waiting room for her child to be delivered. Many younger women said they wanted a technology like this to exist in order to avoid the risks associated with pregnancy and the changes to their bodies. A few believed XX Biosystems, the company in the film, was real, and one expressed interest in investing in the technology. Others saw the potential benefits for same-sex couples and those struggling with infertility, while many feared that technology would rob women of this beautiful and innately human biocultural process. To explore these scenarios further, I wrote a series of seven short stores titled, ‘Of Mothers and Machine,’ which I hope to publish soon, and further explores the complexities of reproductive choice in today’s society.

Before I began these projects, I would have felt this was a very black or white question, and it is certainly one that elicits fearsome debate around the world and especially in my home country of the United States. At my core, I do not believe people’s bodies should be used as political devices, and that we all have a right to reproductive choice and to express our gender identity and sexuality on our own terms. Political debates on abortion and LGBTQ rights are divisive tools for drumming up campaign votes and do not actually help people. I also believe in technological progress, and that biotechnology does promise valuable solutions for people struggling with infertility or those who cannot have children of their own. The goal of my work, and the work we’re doing at DEBUNK, is to take these controversial topics and present them in a relatable way that attempts to uncover the nuance of these seemingly opposing perspectives and generate a conversation that leads to more productive change. It’s a lofty goal, and something I haven’t quite worked out yet, but I’d love to hear people’s thoughts on how to make this a reality. 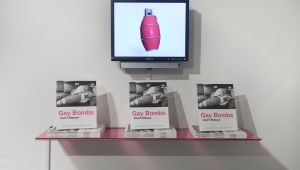