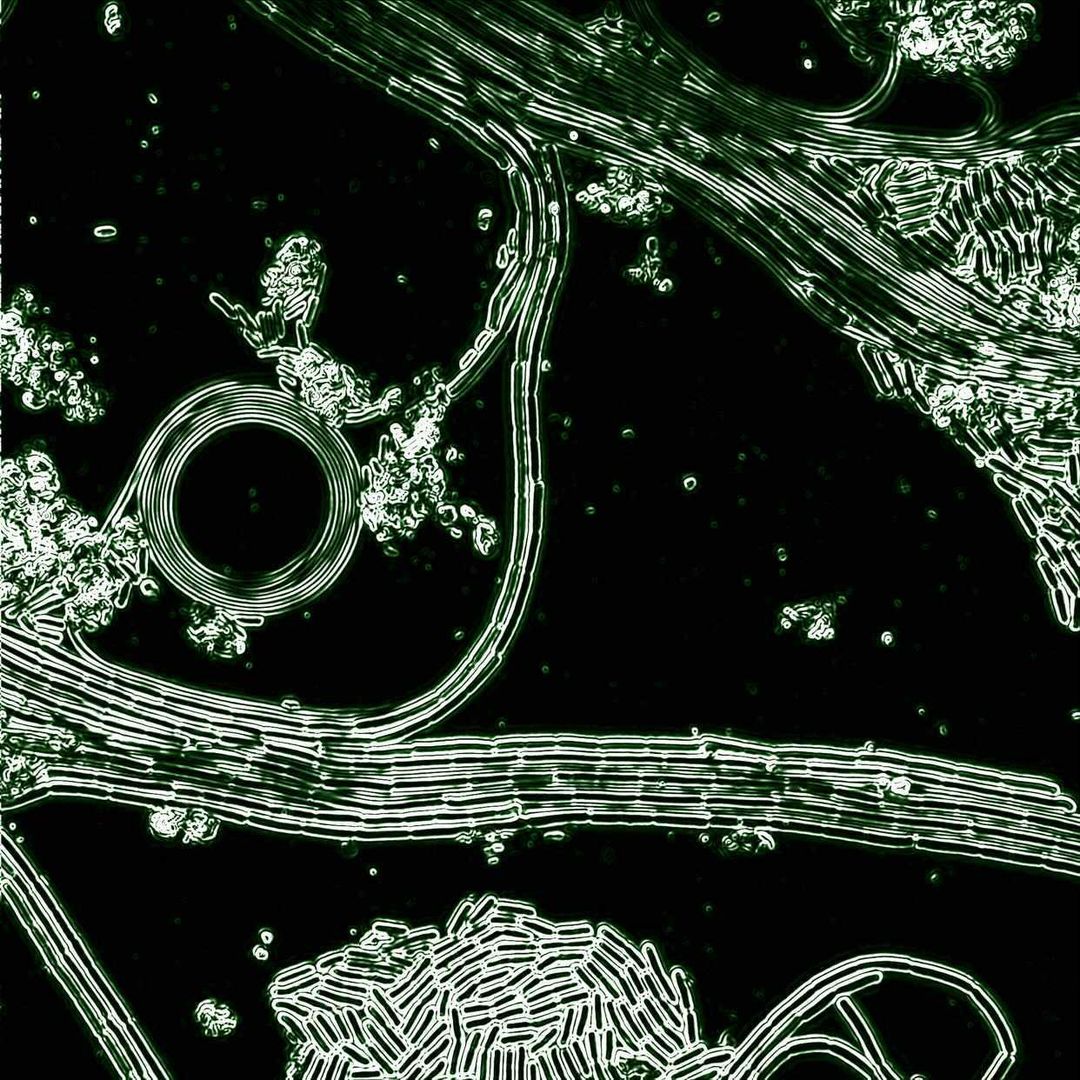 The simultaneous coexistence of multiple arenas, the surfacing of more and more osmotic communities, the proliferation of phenomena of mutual hybridisation and reciprocal interpenetration have inevitably led to the exploration of broader forms of communication.

To disengage from strictly anthropocentric paradigms pertaining to other realms in favour of listening to non-verbal languages arises as volition and a necessity for crossbreeding.

Living and non-living beings are all members of an ever-shifting organic system, in which a thorough and attentive act of mutual listening serves as a discloser for new patterns of thinking and feeling.

Diverse dynamics and dimensions mingle; they entangle one another while not losing a grip on their native identity but rather enabling themselves to be prone and receptive to quiescent streams of knowledge. In light of an inquisitiveness that is not regulated or colonised by restricting categorical parameters, intrusion becomes enrichment, and discovery assumes the shape of a fractal unfolding of comprehension.

Phytocene, a collaborative work produced and curated by 91.530 Le Marais and involving personalities from various fields of study and creative backgrounds, can be regarded as an enactment of such visions. More precisely, the musician Agoria, bio-physicist Nicolas Desprat and sound designer Nicolas Becker have blended the expertise of their respective domains, and focused on the micro functioning of vegetal entities – as the title of the project suggests by addressing the term “phytos”, meaning “plant” from Ancient Greek.

“Sebastien (aka Agoria) and Nicolas Becker contacted me to design a technical solution for monitoring the biological activity at play in a hemp field on the grounds of the Château du Marais, with the idea of generating an immersive audio environment from data collected in real-time. Therefore, my first role in this project was to identify what would be the relevant measurements to render a biological activity. The solutions were numerous, ranging from soil measurements (chemistry, vibrations) to image plant growth analysis. In the end, I opted for the measurement of soil RedOx potential, which is the observable that integrates the activity of the whole plant microcosm: roots, microbes and weather. Then, soon after the first discussions with Sebastien, we realised that it would be great not only to produce sounds but also to visualise directly this biological activity. So I took soil samples to cultivate its bacteria and film them under a microscope”, Nicolas Desprat explains when describing the initial intents.

“[…] I called my old friend Nicolas Becker, a brilliant sound designer who just got an Oscar for the Sound of Metal movie, and I started to express my will of creating a piece where the living system itself would be the artist”, adds Agoria while sharing about the project conception and its development.

Phytocene came into being with the idea of rendering discernible signs and utterances of plants. Plants express themselves via an elaborated and microscopic communication system that is nearly indecipherable to human perception as it is constructed on logic almost alien to our language. The attempt is to uncover the intangible interaction that occurs among the inhabitants of nature within nature itself. Specifically, by positioning specific ORP-30-2-A sensors in the soil of Le Marais, the team composed of scientists and artists recorded the activities of a millésimé hemp plant, such as its respiration process and the photosynthesis mechanisms.

The bacteria discovered in the soil and explored by the probes show their capacity to form and morph into communities, uncoiling their way of “creating a society” in this particular environment.

A music texture unwinds through the rhythm of the plant’s growth; it is based on the gathered real-time data, plant’s identity and means of expression and motion.

The authors unite their resources to translate the cryptic dialogue taking place in the vegetal dimension: probes thus function as a bridge between the human and non-human realms by acting both as exploration tools and interchange channels.

The outcome is the unleashing of plants’ intelligence, which become active subjects and creators in the technology-driven music composition. The human being is placed poetically at the disposal of otherworldly language, creating the space for manifestation.

As Agoria’s words convey, the project spreads from a micro-scale to an all-encompassing macro scale, as if to reassure us with the recognition that we are all animated by the same inclusive breath, that of the universe itself: “We have been fascinated by the fertility of the soil. It is absolutely unique to see so many different families of organisms in the same culture. I did a few works in the past with Nicolas Desprat, and we were finding more or less one kind of bacteria in each culture. Here it is very particular.

We are facing a full living ecosystem with a huge variety of organisms cohabiting. It has been astonishing to watch day after day the birth of living architecture. We have to do more research to analyse if it comes especially from hemp, the soil, the minerals. It outcomes any of our initial goals. Speaking about the music generated by the data from the probes, it was incredible how organic and smooth the musical score was. I lost myself; it became almost cosmic, listening to it for hours. I was so deep into the language we decrypted, I have decided to share it globally, forever. That is how HempFm was born. A radio that streams the real-time score of Le Marais soil 24/24.”

Phytocene is an ambitious work not devoid of nodes to be loosened and technical solutions to be verified by testing, as is the case with all experimental interventions: “There were many challenges. I guess the biggest one was to concretise a project that just started from my intuition, from scratch, with no idea of how it could be technically, visually and sonically. I had to build a team with my old partner Nicolas Becker and develop our own tools. It all started with the unique microscope that Nicolas had to rebuild because we did not see any bacteria in our cultures first!

He built a homemade microscope that exists only in his laboratory, which helped us to film precisely at a micron scale. Le Marais had to build a network and a local technique to collect the data in the middle of nowhere, Antoine Martin developed scripts that read OSC signals to convert it in Midi, but the most challenging has been the fine-tuning. Cause the living ecosystem is…living! Nothing is static. Our main collaborator, nature, isn not offering herself at first sight. We had to spend weeks revealing the beauty of what is hidden.”, says the musician.

And the bio-physicist joins him by stating: “When it comes with technical elements, there are a lot of little challenges that litter the path of making an installation. But, when it comes to outdoor installations, the biggest challenge is designing a robust solution to maintain the installation in natural environmental conditions that we are usually isolated from in the lab. The second major challenge was to cultivate soil bacteria without losing natural diversity. So I devised a homemade solution, which allowed us to maintain a good level of diversity”.

Phytocene embodies the whole life cycle of plants’ life, from the sowing to the growing, until the eventual harvest. The digital and physical, artificial and natural progress in unison by encouraging what the creators call “self-phytomorphisation” – to think like plants, and placing themselves and the audience in a liable attitude that seeks to leave hierarchies behind and learn to absorb multisided versions of the world.

Arts and science are brought together on a shared playground, where the injection of the distinctive qualities of the one into the ground of the other can release spinning energy of polyhedral and multifaceted significance. As this hybrid project emphasises, technology operates as a catalyst for new perspectives, giving rise to an actual exchange that is constantly in the making and deliberately permeated with the fluidity of present and future visions. “Today, more than ever, we are quitting a world with one dimension to multi-era dimension life. It is happening. It is definitely not virtual, and obviously, the foundations are just being written. As an artist, I feel it is very exciting in terms of cross-disciplinary. What we did at Le Marais would have never been possible ten years ago. […] Technology opens new territories with no established rules, where we can rewrite all.”, states Agoria in reference to his relationship with technological advancement.

Through this cooperative project, the sonic universe branches out into contemporary art and science, proposing a transformative approach to our reality. Meticulous research and unanticipated findings coexist and collide in a generative way towards an augmented collective intelligence. The expansion of our adaptive capacity as humans and the questioning of our architecture of taxonomies fuels Phytocene by implementing new frontiers that strive to embrace non-human realms. Conferring agency freed from long-standing and static subordination thus constitutes the source for an ever intensified poly-vocal dialogue craving to surge. 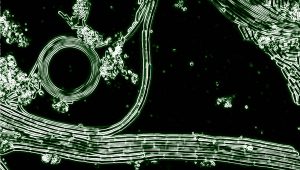