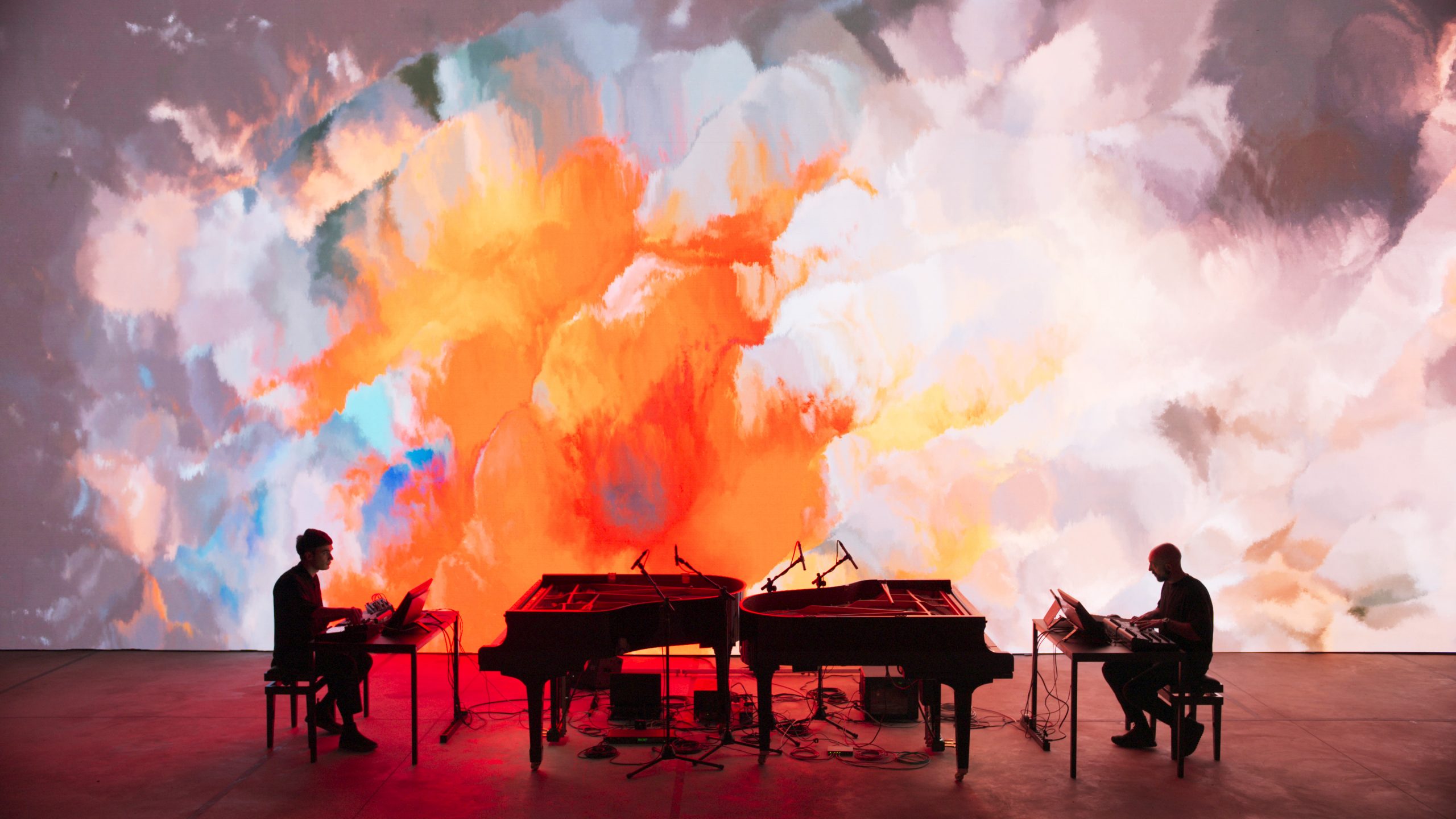 Renowned media-artist Quayola is presenting his very first music project, Transient, an album made in collaboration with musician and technologist Seta and an accompanying performance with video projections which will be presented at Sonar By Day on June 16th. We are delighted to premiere a video presentation of the live show. The album, which will be released on May 20th, is the first publication on the Quayola studio Label.

The project was originally devised as an audiovisual concert performance for two motorised grand pianos and video projections and two conductors in collaboration with generative algorithms, and was presented in one of last year’s Ars Electronica gardens. Transient – Impermanent paintings refer to the heritage of classical music and the painting traditions, hypothesising new sonic landscapes and visual polyphonies. Hyper-realistic digital brushstrokes articulate endlessly on a large-scale projection as if on a real canvas. Each brushstroke is sonified with a piano note, creating polyphonic synesthetic landscapes.

The project continues Quayola’s research on traditional artistic techniques in the context of the human-machine relationship, this time gradually withdrawing from formal subjects and giving way to the computational substance: the algorithm. As veritable pictorial material, the algorithm becomes the real, tangible subject. Its aesthetic value now prevails over the functional one.

Both Quayola and Seta skillfully manipulate complex algorithmic systems to generate the rules by which pianos and paintings are freed from hand gestures. In penetrating deep computational logic, Transient upends the relationship between human and machine, creating a uniquely expressive ‘non-human’ compositional modality. Infinite notes and chromatic elements multiply and articulate themselves in unison. Data creates organic infused patterns and looped, recurrent rhythms and polyrhythms.

Quayola shares with us that the project is the result of several years of research within Quayola Studio in developing systems to generate complex and expressive modulation data in real-time. Quayola and Seta started to collaboratively focus on such systems for music composition.

Our different backgrounds and artistic sensitivities brought us to very different uses of such systems, and therefore an interesting complementary approach in composition. You could say that the system itself was also a collaborator, therefore it was a continuous exchange between three entities – he adds on.

Giving more details on the process, Quayola also shares that, as everything happens in real-time in their system, the performative aspect was very important: The tracks were not composed/recorded in layers and stages like in traditional DAWs but performed and recorded live directly within our system. For each track the artists established a set of macros each, so we could perform and improvise live. The final tracks are essentially the result of such live improvisations.

More interestingly, although both artists have always been very interested in sound and related visual synchronicities, they don’t have any formal musical training. For them,  this lack of such knowledge is probably what provided a very different take on such traditional instruments.  Their idea was really to create a seamless harmonious balance between machinic aesthetics and organic complexities, but that didn’t come as an easy given, many challenges were faced, as is usual with projects that break some grounds, the results though, as usual, are rewarding. Quayola shares that just looking at the overall amount of data since the beginning of the project we are around 15 Terabytes!

When the research started back in 2018 we didn’t really know that it would turn into a piano concert – it was just pure experimentation within the studio.  Developing software can be quite fluid at a demo stage, but when you really need something to work for fully finished creations then it becomes increasingly more complex. Strangely enough, something that really helped this project forward was the Covid pandemic. The really quiet months of the first wave really allowed us to focus purely on the music without any distraction, and this is when the main sonic ideas emerged.

Marcus du Sautoy, the renowned Simonyi Professor for the Public Understanding of Science and Professor of Mathematics at the University of Oxford, wonders Is code synesthetic? after experiencing Quayola’s new work. He reflects further: the idea of the piece is to exploit the fluidity that code provides between three worlds: the visual canvas, the sonic realm of the piano and the functional manipulation of data. What one experiences when encountering the piece is multiple ways for the human body to experience the dynamics of the algorithms that are being manipulated. One is both being allowed to see and hear the digital data as it is being played.