Insight: On ‘The Tyranny of Language’ at HdM GALLERY London

The Tyranny of Language is an AI meets Art exhibition displaying a solo show by Charles Sandison. The exhibition is open to the public at HdM GALLERY in London until October 25th also coinciding with Frieze week.

Scottish-born artist Charles Sandison has always been fascinated with computers, programming, software design, and Artificial Intelligence. Having self-taught coding at a young age, he went on to design and sell his own computer games before deciding he wanted to pursue a professional art education. Attending Glasgow School of Art, he soon realised, however, that for him conventional visual mediums lack the expressive powers of programming which led him to merge of his two passions to create digital art.

Throughout his career, he has explored Artificial Intelligence and artificial life within the boundaries of the digital world. Sandison has decided to use language as a form of artificial life that can be programmed to grow, feed, and evolve like a biological organism. His works consist of digitally produced video installations that immerse visitors into a world of constantly evolving words, symbols, and letters that engage with each other twisting and interlacing, fusing into different formations and breaking apart, moving with a perceived purpose producing a variety of imagery, almost as if they had a mind of their own, as if they were very much alive. In Sandison’s own words: ‘my work is a living system in which we exist in collaboration with an invisible demon’.

Viewers are an essential part of the projects as the characters and words are encoded not only to interact with each other but also with the viewers pulling them into a conversation with the work. The characters and symbols at first seem to dance around erratically across building facades and gallery walls with no logic behind but upon closer examination one can observe a particular pattern of motion which is a computer simulation of the patterns in different biological and societal systems. The visual arrangements also convey ideas and narratives demonstrating transformative impacts of language. In a straightforward yet poetic way, the project shows that it’s not the only language that can be built on binary code, but our entire structure of thought lies on dualistic structures.

Sandison seeks inspiration in many different facets of life, from nature to human history to modern-day reality and its challenges. Incorporating a diversity of influences, his work builds on the ideas of Conceptual art and is often philosophical in nature exploring a variety of concepts about what constitutes life, humanity’s relationship to language, its possession and sensorial experience.

From October 3rd Sandison’s site-specific installation will light up Conduit Street in London as part of Frieze Week 2019 about which he says: ‘every building façade in the world has an invisible language within it, and this site-specific work brings that narrative to the surface.’

‘I want to extend the existence of my artwork long enough to demand its own passport and become sentient in its own strange way.’ – Charles Sandison 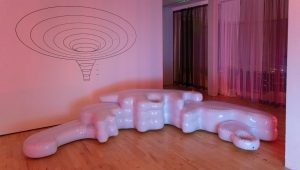 Exhibition: ‘Portal Tables’ by the Decorators at Stanley Picker gallery 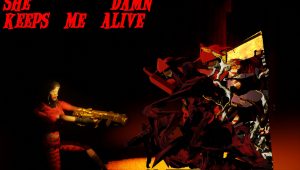 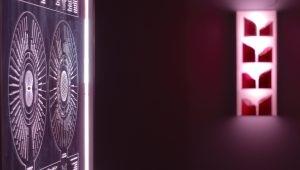 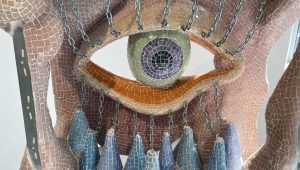