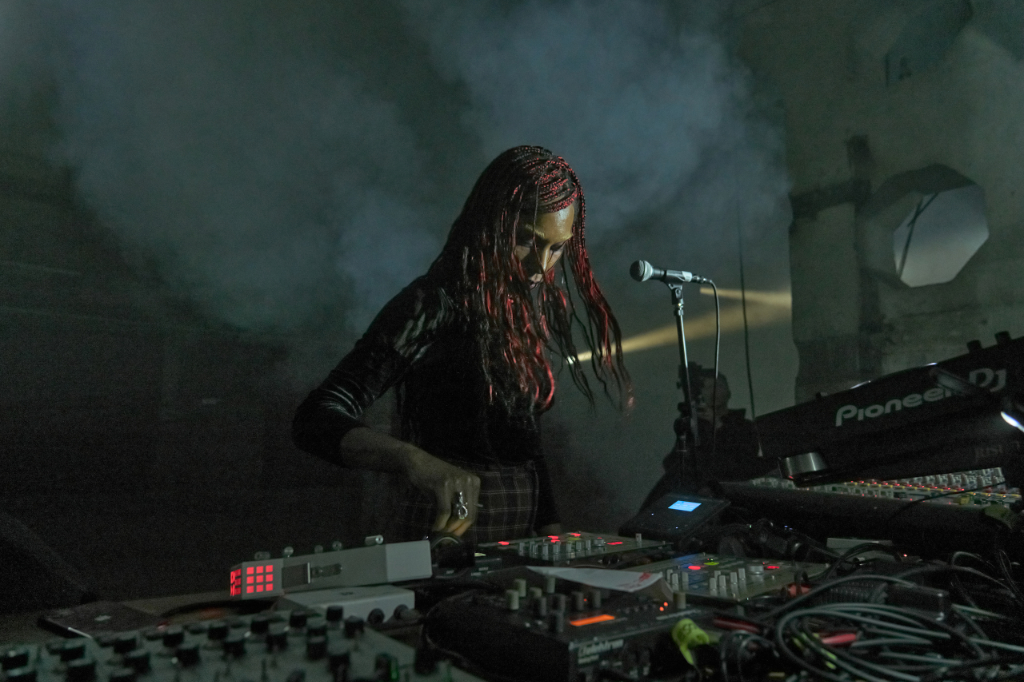 While spirituality, in some respects, embodies a process of pronounced introspection, it is also a quest and tension towards a sense of connectedness that goes well beyond the individual dimension. Through the spiritual attitude, one strives for a more profound comprehension and a trust that extends outside the self by initiating processes of communal bonding and often involving ritualistic gestures for the generation or ignition of beliefs. Within present-day society, spirituality morphs into an ”electric condition” due to the prominent dematerialised interactions that permeate it and, in a way, the invisibility of the creation process of sentiments or cultural trends. It may be tempting to speculate that the very idea of a network is a form of association drenched with spiritual overtones in which every sharing is relied on for open access. In this context, the virtual and the sensorial intertwine continuously.

New Rituals is an event series exploring and experimenting with identity and spirituality in the post-digital age curated by Estela Oliva. After a period of absence due to the pandemic outbreak and consequent cut-off of live shows and settings, this year’s edition will be held on April 23rd at the Barbican Center in London, hosting NKISI and Ryoichi Kurokawa. The two artists will take over the Main Hall by presenting audio-visual performances that peculiarly capture and reinterpret the core intent of New Rituals.

I believe in the power of live experiences to open up spaces where people connect with their inner selves and with each other in different ways, creating a sense of unity and community outside the given structures that usually oppress us. New Rituals is a place where visionary artists bring their unique views of the world and connect with audiences in a mutual exercise of transformation, exchange and expansion. The events have their own cycle, ad hoc and not following any particular time-based agenda. Instead, New Rituals is invoked as a response to the particular needs of the current times, carefully curated and with a lot of thought and passion put into them. Explains Estela Oliva, curator of the event during our conversation.

Japanese artist Ryoichi Kurokawa premieres his audiovisual concert subassemblies exploring the powerful relationship between architecture and its surroundings, human-made structures and nature. Ruins, nature-invaded buildings and architectures in disrepair are deconstructed using a combination of 3D imaging data, thermal image and filmed footage to be then rebuilt into layers of order and disorder while exposing the force of both nature and art.

Musician and artist NKISI will enliven the setting through her last work, Invisible Gestures, of which a concise but substantial introduction follows: “I’m interested in sound’s impact on the human psyche and behaviour, the mechano-sensitive reactions to sound in our bodies and surroundings Invisible Gestures investigate the gestural and the subtle power sound has on us and how we can use it to push consciousness to other heights. How do we communicate with the invisible in paradigms that only give room to the visible? I spent some time in Ouidah earlier this year for the Vodun Festival, where I did some filming and encountered the traditions. As an audio-visual performance, it is a sort of autobiographical account and experimental film with a live soundtrack, as an invocation of liberation.”

The mention of technology, when confronted with anything that eludes at least partially to rational cognition, appears to be a rather spontaneous nexus as, in many respects, technology holds an almost magical touch. Through its applications, experimentation and the coding practice that somehow resembles an ancestral or alien language, the present is augmented in its spectrum of potential.


[…] spirituality is the key attribute of the post-digital age and the post-digital state of mind. The age of digital exacerbation, pure data and meaningless technology has evolved, and we are now looking for deeper connections and meanings enabled through technology. During the pandemic, we have more than ever connected in new ways. The online medium has been the main facilitator of the individual and the collective spiritual force, especially as our physical bodies were segregated. I believe this new connection is here to stay with us, and it will continue to evolve. Oliva suggests shedding light on the correlation between the underlying principles of New Rituals and nowadays’s reality imbued with digital scents.

The wondering, questioning and shaping of identity are urges and conditions that simultaneously derive from and constitute the basis of each moment in time. It is about a perpetual flow of moulding and expressing for which rituals might act as a gateway and enable revamped meanings. In this regard, both Estela Oliva and Nkisi propose their take.

Identity is an ongoing question and an exploration of humanity and our place in the world. Rituals allow us to open our bodies and minds to be more ready to live with and in who we are. In the current times and in what we so call the “western world”, our rituals are deeply influenced by the connection with technology and the virtual realm, and this drives the representation of the self. From sharing intimate experiences to connecting with others purely online, the virtual ritual exists in a new expanded reality in which we live the now”, diaphanously states the curator. The artist expands by also touching upon the notion of rhythm, a primary element of her practice and poetics: “The ritual is the future in becoming, a form of pre-rehearsing of what we want to manifest, abstracted into a musical, gestural, and sculptural score. Everything always exists first in the invisible realms before they materialise. Rhythm is the key element in creating, connecting, and sustaining the vital life force that connects us to the cosmos.

When such issues are addressed, the temporal perception seems to cease or mingle unbounded by a linear conception. Social mechanisms, inner dynamics and belief systems revive, meet and collide, conveying the feeling that a cyclic experience is possibly fuller in its significance and perception. By embodying these subjects through her work and research, Nkisi invests us with her position and comprehension of a rather fluid temporal partition: [the ancestral, the present and the future] they all exist at the same time but in a multi-dimensional quantum way. They encounter in our bodies in the present, as our bodies are where they all intersect. The ancestral is where the autobiographical comes in. As an incarnation of my ancestors, I am full of knowledge that I can unlock. The future exists as a vessel full of all future possibilities we can tune into through our actions in the present. Time is not only a sort of circular dimensional movement; it rather functions more like a spiral, where our future and ancestral doubles can be called in for guidance. Here is where the musical magic happens.

Website https://www.barbican.org.uk/whats-on/2022/event/new-rituals-ryoichi-kurokawa-nkisi
(Images courtesy of New Rituals and the Barbican)