MMMAD festival for digital art took place in Madrid throughout May. For the second time, the organisers under Aida Salán, Cristóbal Baños and Diego Iglesias – members of creative studio HYPER STUDIO – turned Spain’s capital into a museum with motion graphic design exhibited on screens, Instagram filters accessible with QR-Codes, and screenings of virtual reality films. In 2020, when the festival took place for the first time, 27 artists participated. This year, it was 40 artists from 15 different nationalities. The need to replace physical presence with virtual encounters freed the way for a futuristic presentation of art asandw opportunities for artists, and I was impressed to see what is possible.

The first event I went to was the competition of Instagram filter creations presented by Goethe-Institut. Artists could send in their works, and a jury consisting of the architects and digital artists Adrian Steckeweh (@omega.c), Aaron Jablonski (@exitsimulation) and Lucía Tahan (@luciatahan) elected the best 20. Those were then physically exhibited on the grounds of Goethe-Institut. On LED screens in the building, visitors could see short and repeating videos. Exciting was the idea to apply QR codes to stone benches in the gardens. By scanning them, visitors could extend the real surroundings with augmented reality features by using the filters in real-time.

The initiative touched the Zeitgeist and reflected the way people use their fantasy and modern technology to create their reality when limited in their mobility. I tried some of the filters after sitting in on the discussion between the jurors in the conference hall. Lucía Tahan was present and talked to her two colleagues on a camera. They were projected on a screen behind her, giving the audience a feeling of looking at a real podium. However, the problem was that they could not see the audience, and the talk became like a typical Zoom conference with colleagues talking about projects from an insider perspective. Without seeing the filters, they were referring to; I was lost at times, which was a pity considering I would have had an even more exciting experience using the filters after hearing about the background of their creation. The exhibition will again be presented in November 2021 in LABA Valencia.

Another point in the program was the presentation of works on 15 JCDecaux screens at bus stops. Here the public could see various graphic motion design pieces that are part of the HARDDISKMUSEUM’s collection. Each support showcased the work of the 15 artists, a maximum of three works per artist and with a maximum duration of 3 minutes per work. Visual Effects Artist Hamid Ebrahimnia showed a selection of four short videos. An airplane passed underneath the Golden Gate Bridge with suspenseful music in the background and a slow-motion part to create the news video effect. German motion graphic designer Oliver Latta showed four videos as well. In loops, he had a woman cry black tears from which flowers grow over her face shortly before she sucks through her mouth the top layer of her face.

Another video shows intervertebral discs that squeeze little heads out of when the spine moves. Especially the second work I could immediately relate to, sitting on a desk all day. Spanish artist Claudia Maté was another artist whose work was presented in this exhibition. A woman in a sexy dress with long red nails holds a smoking cigarette in one and a red wine glass in the other hand. She looks drained of energy. I was very impressed by all the works and could watch them for hours. At the same time, however, I had many questions when looking at the works, and I lack information. That is something I was missing in this urban display of art.

Anglo-Spanish artist Natalia Stuyk got three screens, big ones right at one of Madrid’s main places, Callao, on the façade of Palacio de la Prensa. Her work explores escapism, ritual behaviours, and impossible worlds. She is currently creating a symbiosis between the real and the digital, encompassing new technologies and moving away from conventional digital video.

For MMMAD, she showed a series of works that could be seen at different times of the day. I was waiting in front of the screens to change to her art, and when they did, I was convinced that this is a great way to use the technology and the city to show art not just to people who search for it but to everybody. But when the content changed again, and I was staring at the dazzling advertisement, I wondered if people still really look at the screens surrounding them. If artists must share the screen with other customers, the audience is confronted with a lot of content they do not want to see to see a piece of art for merely a few short seconds.

To break from the visual impressions, I listened to a Zoom event presented by La Casa On, the online program of the cultural institution La Casa Encendida. Apart from online courses in which they looked at the definition of digital skin, working with augmented reality and the impact of Google Maps for our cities, they gave international artists a platform to present their ideas under the title of “political and digital”.

Mario Santamaría and Taupe Magazine were invited, just as was the Austrian artist Georg Fassl. The 35-year-old talked about architectonical philosophy: “What we see can never be fully put into words”. He cited the British art critique John Berger who with this sentence emphasised the gap in the perception of individuals. He referred to many philosophers and scientists who have tried forever to explain where we get our knowledge from. Einstein said, “The imagination is more important than knowledge”, and for Fassl, too, this is a source for creativity. The festival clearly showed some truth in this sentence, with imagination leading artists to extend the reality. For Fassl, too, it is essential to let the outside affect the individual, embrace experiences, and see where it leads us.

Engaging in this context was the immersive experience presented in the Taller de Ideas. The multimedia space opened its doors for the first time to the public to show works from renowned international artists on a 10×3 meter screen. Every weekend they presented a different piece, Vitamin Studio, The Rodina, Estela Oliva/Clon and Zach Lieberman. I was present to see Clon. Without any chance to influence the video, I was a victim to whatever the artist wanted me to see. From a personal viewpoint, I walked on the surface of a strange planet, I explored a monument surrounded by statues in the form of modern products like a smart watch, and I crossed a sea surrounded by an icy landscape. It was oddly calming to explore the sights and impressive to see how the landscape around me changed with my movements. I felt the need to explore it myself. This, however, was not an option. Once again, I felt like this is the future of art. Maybe it is the future of travelling, too.

The festival was an enrichment to Madrid, and I hope we will see similar events more often in the future. My problem was mainly that I kept missing stuff. It is difficult to visit a museum that is distributed all over the city because then, you need a lot of time to figure out when you can see what and where. And to maybe combine the exhibitions with other appointments. Another thing is that I lacked information to accompany the works. Technology impresses me, and I think a lot of people easily. But I would like to know more about the background of their creation and the artists. In general, I believe that the organisation is innovative and promising. In the future, I hope to get an App or something similar that will help me coordinate the visits, plan a route, have something show me if I can see the pieces right now or later. This might be too much to ask; it might be a fantasy right now. But as Georg Fassl concluded from Einstein’s sentence. This is where creativity is born.

Website https://mmmad.art/en
(Image courtesy of the MMMAD and the artists) 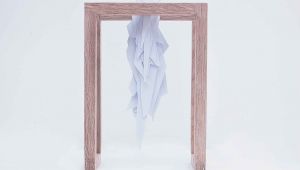 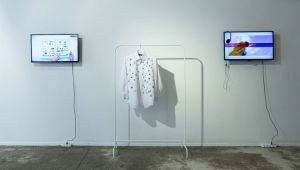