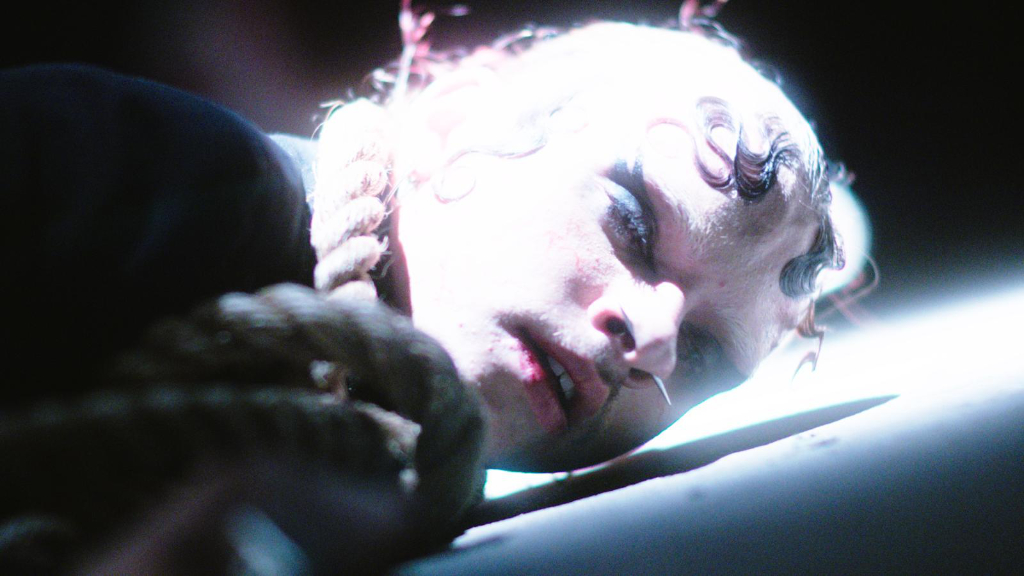 What if Jesus Christ Superstar took place in a post-internet, queer oriented sci-fi landscape? What if Jesus (was) replaced by AI, surrounded by capitalist Apostles, female hackers, Luddite secret police, and an outcast Judas, who questions everything? What if Judas became the unwilling protagonist of the story, only committing an act of evil after becoming disenfranchised with the abuses of power and corruption performed by the ‘Corporation of Apostles’?

This is the premise of JCX Superstar, a new film project from director/curator Zlata Mechetina, producer/Head of Art Sonya Bleiph, and a team of interdisciplinary collaborators from the @fetchish_net art collective. The film taps into ideas of “The New Dark Age ” and the “gamification of social and cultural processes’ —taking cues from MacKenzie Wark’s Hacker Manifesto and Gamer Theory. Mechetina says it is most appropriate to describe the project as an interpretation of the musical Jesus Christ Superstar from Judas’ perspective, in the video game style synthesised with anime aesthetics. The short film takes one of the world’s best-known stories and reorients it toward a conspiratorial techno-dystopian environment.

The project employs a unique post-internet aesthetic, merging together influences from video games and contemporary art. The virtuality of this piece speaks to its broader interest in gamification and how many social structures have been gamified in our contemporary age.

The video game style allows varying mediums to blend seamlessly, generating a distinctly interdisciplinary experience. Mechetina states, (it’s) a kind of a liminal intergenerational space, fusing together digital and physical cultures, absolutely perfect for the critical speculative turn. So it is not only an interplay with different mediums but also a kind of shattering of time perception; it is becoming an out-of-space, out-of-time experience of the biblical story.

Where the film was born from members of the @fetchish_net collective, it is no surprise the project is highly collaborative. Mechetina is used to working in this fashion, having regularly curated interdisciplinary projects through the platform. They write, My dream would be a disorienting movie, and an unfailing memorable phenomenon by shapeshifting all genre-boundaries but created not under the ‘genius talent’ dictate but as a result of (the) work of one organism, with the rhizomatic ideas and changing process.

This way of working directly contrasts many modern filmmaking practices, which rely heavily on the individual filmmaker. Bleiph also recognises this cooperative vision and notes the importance of creating this way in our present moment. Right now, we are exposed to an incredible multifariousness of resources thanks to the continuously evolving trajectory of thought and technological progress. It would be a sin not to implicate the broadest possible range of techniques and talents.

Though the film is loosely based on Jesus Christ Superstar and the original Bible story, JCX never intended to make commentary on religious practices or Bible. Despite this, the project does touch on ideas of religiosity and “followings” in contemporary digital culture. It points, specifically, to the role myth and folklore play in the information age. Bleiph provides some further insights into this aspect of the film. Generally speaking, the culture of ‘following’ takes different forms at different times. One of the most fashionable and recently challenged ways to do that is sourcing information from the internet without applying critical thinking when processing the retrieved data. Often, people trap themselves into thinking that their opinion and arguments resonate with their perspective on things using parasocial relationships with media personas. One could argue this dynamic resembles religious following and how people get into a conspiratorial mindset.

Mechetina and Bleiph see the project fitting within a broader tradition of subcultural, art-house filmmaking. On the film’s Indiegogo page, they credit Derek Jarman’s Wittgenstein (1993), Suspiria (1977), and The Cook, The Thief, His Wife & Her Lover (1989) as inspiration.

Thinking of this work within the tradition of these films also provides a wider context for viewing it. Bleiph particularly sees the importance of working in this fashion while trying to tell such a contemporary story. This manner of manipulating and working with old materials represents the evolution of conceptual thinking. Thus, by taking Jesus Christ Superstar and reworking it into a post-internet queer-oriented commentary in a form of a cinematic piece of art, we continue the heritage of encapsulating the ephemeral yet influential state of mind inherent to the unit of the subculture that we, the creators of JCX, can relate to.