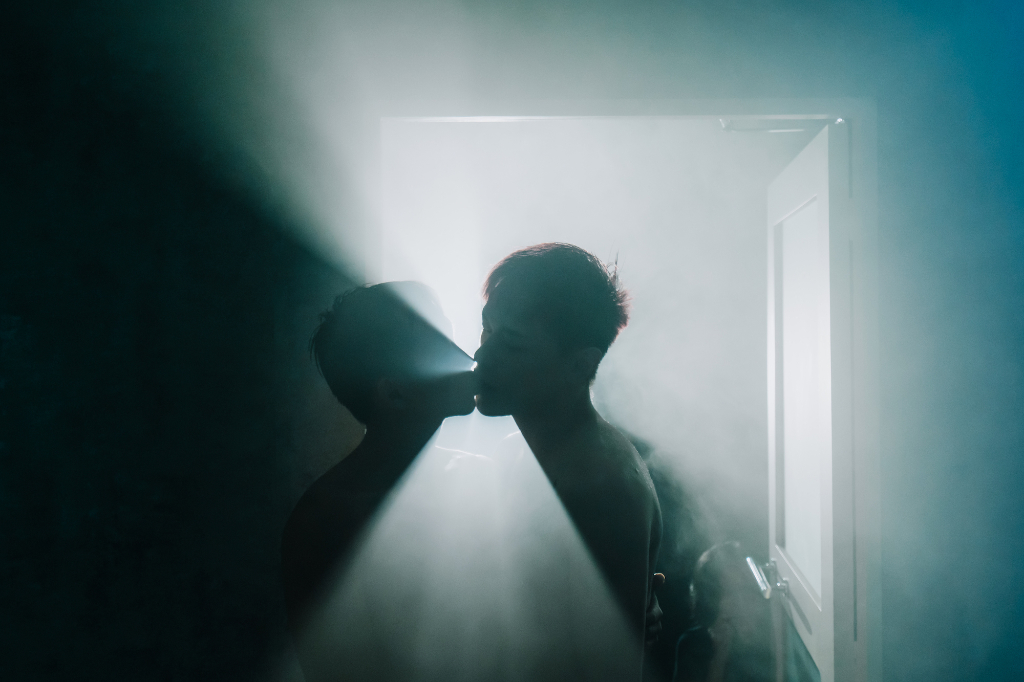 In the Mist, a VR film from Chou Tung-Yen that is currently screening as part of the Queer East Film Festival brings viewers into the surreal, dreamlike environment of a fantasised gay sauna. In a dim lit, mist-filled room, a group of naked men meet to have their desires fulfilled, longingly glancing at each other as intimate contact is made. Entering this space through a VR headset, viewers are taken into the dreamy environment, catching glimpses of these bodies through the rising steam. From the moment you enter the virtual space, you are taken on a trip, getting lost in the surreal, sensuous imagery as you travel through the mist.

The film utilises the medium of VR in a unique fashion, allowing viewers to immerse themselves in the otherwise secretive world of queer saunas. Working across mediums like theatre and film, Chou Tung-Yen brings a distinctive vision to creating in VR and takes viewers on an adventure through a space that has seldom been explored in other virtual media. Speaking on the singular possibilities of VR, Chou Tung-Yen states: I think that the great power of VR lies in its ability to take us to places we could otherwise never go to, like someone’s dream or memories, a very deep ocean, or outer space. But other than these “spectacular scenes”, I think that VR should really be a mind game that plays with your brain and your senses. It should be sensual and visceral!

This work presents a new vision for VR filmmaking and has been celebrated for the unique experience it creates. In the Mist has been screened in several film festivals internationally, most notably at the 2021 Venice International Film Festival. However, the explicit nature of the film has posed challenges to its public screenings and created conversations around censorship for sexual content. When discussing the controversial nature of the film, Chou Tung-Yen said: This very explicit erotic film had the honour to be in the Venice Film Festival 2021, which had to take place online due to covid. However, because of its sensitive contents, the film couldn’t be screened on the regular platform, so it was shown in a special screening. The curators actually faced this censorship and had an open talk about it [1]. I truly thank Michel Reilhac for his interview on “We must stand for the independence of creation in virtual reality [2].

Despite the controversy at other screenings, the Queer East Film Festival presents this work in a uniquely immersive way by transforming parts of The Horse Hospital venue into an actual sauna that viewers must enter to watch the film. Having to step into the physical sauna space before entering the virtual one creates a layer of “double immersion”, allowing audiences to become more fully a part of In the Mist’s world. This screening also features the ability for ten audience members at a time due to the use of newer, more accessible VR technologies. For a film that has previously been shown to only one person at a time, this is a huge step forward for finding a larger audience.

For Chou Tung-Yen having this physical space before entering the virtual is important, as {it} gives a hint to what you’re about to experience, and it will help the audience to make sense of that. It’s all part of the mind game that I mentioned earlier. I believe the immersion already begins when you enter the physical space, and this physical environment can really soften the transition of your brain into this virtual world.

As an artist working across mediums like film and theatre, Chou Tung-Yen has a unique eye for bringing audiences into spectacular worlds. His background in theatre is especially prominent while watching In the Mist, as the choreography of the men often resembles that of a stage production. The director notes that his expansive background as a media director was crucial in creating this unique experience: Definitely, as a theatre director, I always think about the composition of space, interactions, and eye contact with the live audience. But I also work extensively in film and documentary, and I’m very used to thinking in “frames”. In a way, these are all issues that I’m dealing with in this VR project, and so I feel like my interdisciplinary background really backed me up for directing VR.

To watch In the Mist is to be transported into a space that resembles a dream, where longing, loneliness, and desire are explored. Queer sauna experiences are usually shrouded in mystery, and this film allows you to explore this otherwise hidden space in a distinctly immersive fashion. To experience this world through VR allows for an intimate bond to be created between the viewers and the performers — more so than if this had been presented in a more conventional film medium. When asked what he wished viewers would gain from the experience, Chou Tung-Yen responded that viewers didn’t necessarily need to gain anything from viewing the film. I hope the audience can just have an adventurous, dreamlike trip. And maybe, just maybe, feel less alone after the trip.

In the Mist is showing from 21st to 24th May at The Horse Hospital in London.