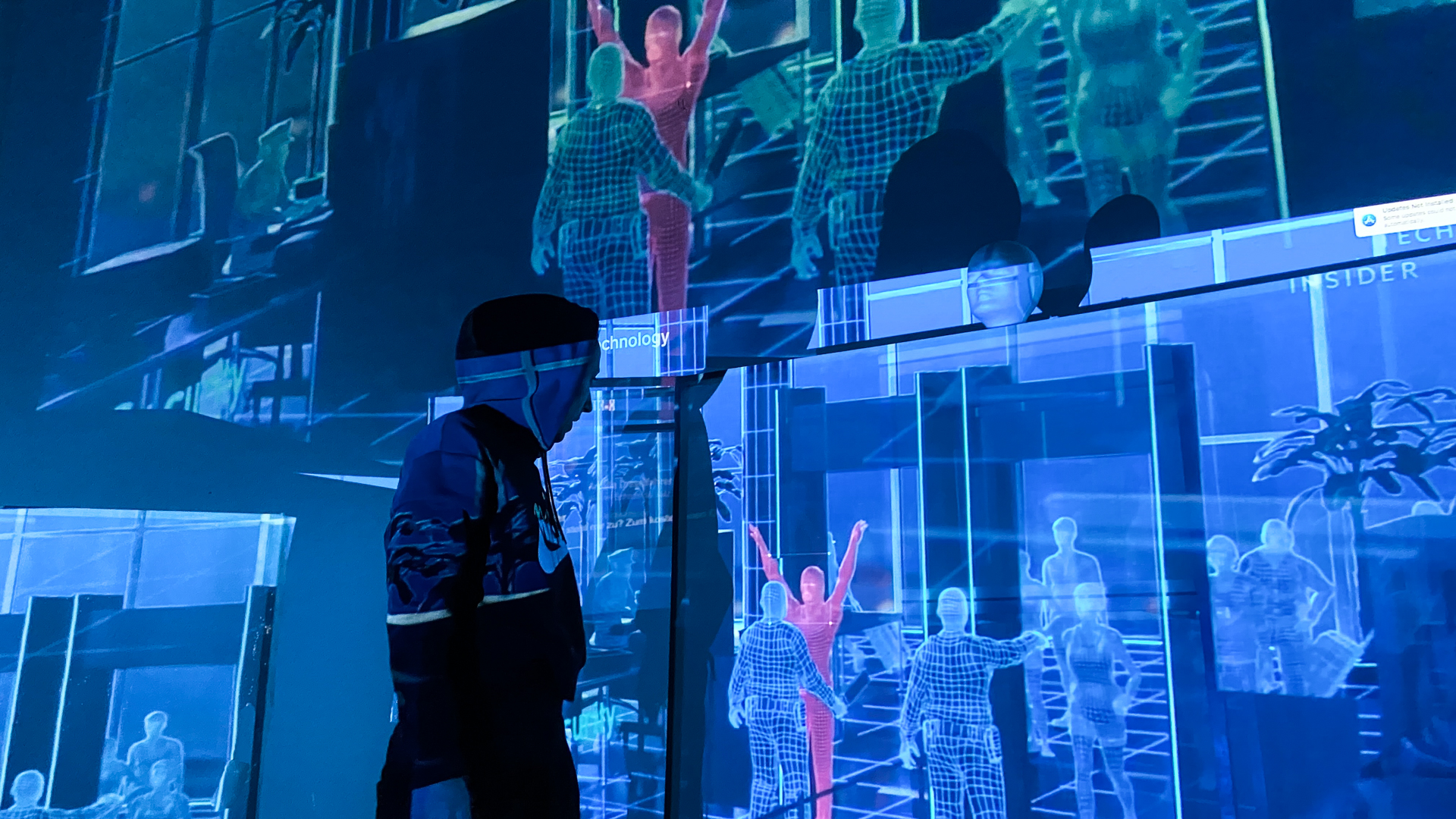 Some call it the Information Age, Computer Age, Digital Age, or New Media Age. Regardless of the name, we are now living in a period in which our ability to generate information outpaces our ability to comprehend it. This means that making sense of the data generated by and about us is a major issue of our time. This is where artists might investigate the aesthetic potential of this data, uncovering hidden patterns and making significant connections, by making use of their unique vision.

As a result of the technological environment that we live in, we tend to spend a lot of time linked to electronic devices. We perceive and absorb part of the world through a constant flow of non-linear audio-visual fragments. Our brains and souls process, connect and articulate all these fragments to be able to find our own voices.

With this in mind, media artist Valentina Berthelon and musician Tobias Freund, known for their work together as Recent Arts, developed Hypertext – an audio-visual experimental project that synergises ideas of nonlinear data and information processing by drawing parallels to computational thinking with the way our human brains biologically process information – A non-linear way of presenting.

Hypertext materialised in an album (released March 2022 on Reiten the record label run by Kosei Fukuda) and an audiovisual show. For the visuals, Valentina uses jarring and intense visual juxtaposition to create moments of both connection and displacement. References mix and intermingle, creating new meanings. Computers similarly digest information, but unlike the human brain, their ability to generate information is not exceeded by their capacity to understand it.

For the sound, both artists made droning, moody soundscapes together, almost as though the internal voice of our computer world was captured and recorded. Inspired by the visual aesthetic of hyperlinks’ collaged and non-linear nature, the album reflects this in the ambience, where samples float in and out of contact with the listener, catching and holding attention before floating away awash with more elements and compositions


By feeling overwhelmed and confused by daily life with the huge amount of information that we are getting from the internet through the different devices and platforms, the idea for this project was born. Our ability to generate information definitely exceeds our capacity to understand it, and I see it as a challenge of our times to make sense of this data.

We absorb this information through a constant flow of non-linear audio-visual fragments, we jump from one content to the other so fast and so many times through the day that at the end of it our brains have to find a way to make sense of all these fragments. This confusion inspired me to get lost on the web to explore the aesthetic possibilities of this information, in an attempt to make meaningful connections.

The artists clarify the meaning behind the title Hypertext: a non-linear way of presenting information. Rather than reading in the order that an author, editor, or publisher sets out for us, readers of hypertext may follow their own path, create their own order, their own meaning out of the material. There are hyperlinks between the information. These links are provided so that readers may jump to further information about a specific topic being discussed, which may have more links, leading each reader in different directions.

Hypertext is not limited simply to text, it can incorporate pictures, sound and video. Hypertext operates very similarly to the way our brains do – in a series of networks, or associations – as opposed to a linear path. Hypertext is one of the key underlying concepts of the World Wide Web.

For the artists, what is most fascinating about hypertext, is the ability to open a dimension in which interconnection plays a fundamental role. Generally speaking, humans are thought to think linear, the cause > effect logic, but the idea of non-linearity represents much better our world, and its infinite varieties and complexities, where things do not happen in linear sequences but all together. Because life is a connected phenomenon, there are no independent organisms but only interdependence.

New technologies have opened radical possibilities in the field of sound and music. Technology has not always taken the right path, AI for example shouldn’t be developed with the aim of replacing human beings but with the intention to create spaces and forums where people can connect, connect creators and consumers.

To create the performance and to reinterpret the hypertext concept into sounds, the artists used two stages: the first layer of the sound was created using the original sound of the sampled footage so it is in direct connection and synchronisation with the video sequences. This layer of the music is basically a collage of voices and sounds, the voices are incomplete fragments of narrations that are recombined to create new stories and meanings, in these new narrations absurd plays an important role.

The second layer of the music was composed and inspired by the video sequence. This layer was not made using hypertext as a method but it does aim to reflect the concept through uncanny atmospheres, odd soundscapes that function as the glue or net in which all elements of the performance coexist.

The artists understand the importance of Music as a medium, as it allows us to communicate beyond a verbal way, reaching aspects of human nature that are more abstract and profound. Let’s say that sound is a physical phenomenon and music a manipulation of sounds that can be heard by humans.

Music is embedded into society and plays a fundamental role in our everyday lives, it’s everywhere, it surrounds us, and it’s there even if we are not listening to it. We can use music to manipulate our personal moods and to make our lives happier. On a social scale, music plays an important role in shaping society and identities and at the same time, it’s a reflection of society, because it reveals some of its values.

The framework of the work was hypertext, but the audio-visual made use of other topics such as artificial intelligence, simulations, digital surveillance, social media, climate change \and meditation. The major problems of our time are all interconnected, climate change, poverty, technology, economics… none of them can be understood in an isolated way, this is why we need to think in terms of relationships.