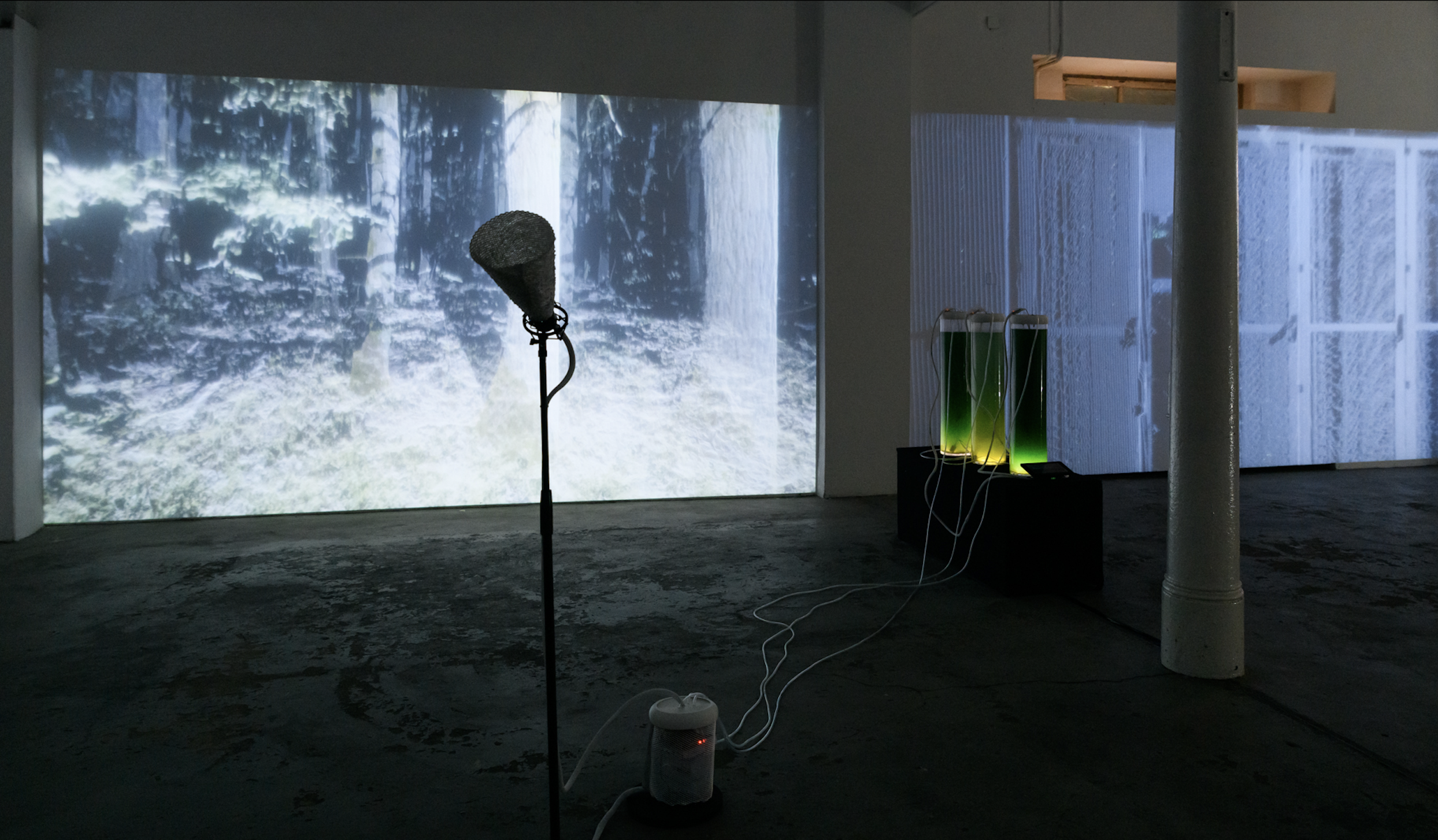 In Aristotelian philosophy, Hylē is a predominant matter that in itself has no individuality, specific form, characteristics or meanings. And only through tecnē (human processing), a transformation happens, and Hylē takes shape.

In her new work, a german artist Theresa Schubert refers to this concept to explore the interconnectedness of the presence and the feedback caused by different actions. Her new audiovisual installation, called Hylē, can be seen at Berlin’s Atelierhof Kreuzberg until June 19th. The project which is funded by the Federal Government Commissioner for Culture and the Media was originally commissioned by Laboratoria Art & Science Foundation and Kaspersky.

A small exhibition space in the heart of Kreuzberg now looks more like an underground laboratory than an art institution. In the middle of the room, surrounded by plastic tubes, there is an emerald-shining bioreactor — three large glass flasks with algae growing inside. This “primaeval soup”, as Theresa herself calls it, controls other parts of the installation. Using 3D laser scanning, the artist also created a multi-channel visual, a projection of the forest and data centre infrastructure. Despite working together well aesthetically, these images embody two significant aspects of our lives.

They [the two environments] both are vital for modern human life in specific ways. Forests purify the air and water. They are also a multi-species habitat and mitigate climate change. On the other hand, server farms represent our digital lives. They are the overlooked architectures of the Anthropocene. As the infrastructure of our networks, they give physical presence to our digital data, and make us understand that digital life has an impact on the world by using resources and contributing to climate change, Theresa Schubert said.

Hylē focuses on the idea that things are interlinked, and this kind of network can be extended beyond species or different materialities. This thesis also somehow correlates with the technical component of the project. 3D laser scanning is based on working with so-called point clouds, a large number of points in 3-dimensional space, each of which is connected to others around it.

By the way, Hylē is not the first project where Theresa appealed to this technology. Speaking about the advantages of 3D scanning, the artist explains: Laser scans are a measurement of the environment, but not an optical capture. Depending on the device’s resolution, you can get a bigger or larger point cloud, making it more realistic or abstract. But when you put these points into a computer, you can walk through them and even around by setting the camera movement. It is a little bit like looking behind the matrix. And this is what I find really fascinating.

Visuals and audio in Hylē are connected to the algae-bioreactor through an air sensor. And this is where things get really exciting. If you are breathing into a special funnel, the images on the wall begin to distort and tremble. This happens because released CO2 is measured with a sensor, whose signals cause changes in the sound and visual environment. But that’s not all. After computations, CO2-enriched air is pumped into the bioreactor, where absorbed by the algae. Those produce oxygen, which is returned to the exhibition space. It’s amazing how seemingly abstract data — the algae activity turns into numbers — eventually becomes part of the material world.

We [the programmer Ivan Taranin and I] connected the audiovisual environment to the sensors of the reactor to have different aspects of changes that will happen. Some of them, which come from the reactor itself, are more settled, and some are more dramatic, obvious image disturbances due to breathing, noted Theresa.

It is also interesting that Hylē interacts with one of the key mechanisms of the human body, breathing. On the one hand, this is quite sensible since CO2 is necessary for the metabolism of algae and helps them grow. However, today, after two pandemic years, when wearing masks has become a new normal, such nuance can be taken on a special meaning. Theresa herself emphasises several reasons that prompted her to use breathing as an interactive component in the installation.

It feels liberating to breathe again after such a long time of wearing masks when our breath has been kind of dangerous, she said. Also, it has a very existential meaning for our bodies. Without breathing, they are simply dead, so I think it makes sense to use this in an installation with algae and a forest. Besides, it is such a simple way of interaction. You don’t really need a description text or any kind of instruction to work this out. It’s obvious and a little bit playful.

After spending some time in the exhibition space, the first impression that everything is happening around a laboratory experiment remains aside. Video projections of the forest and server farms enchant you. Moving from abstractions to clear-сut figures, they create the image of some illusory mysterious world. The dark, ephemeral sounds add even more meditativeness.

Theresa explains that the algae sculpture at the centre of the installation symbolically represents the dream machine. She mentions the idea of ​​using this kind of symbolism: Doing my PhD, I was researching in the field of non-human agency and non-neuronal creativities. Creativity is a process traditionally associated with humans, an anthropocentric quality. Dreaming is one of them as well. I mean, animals also can dream, but it is still considered a very human process. And I tried to play with this idea, imagining what could it be if they [non-neuronal beings like plants or algae] were able to dream, if they observed us, what we are doing. Probably they could come up with these two images of forest and digital lives that we are so connected with.

With her works, Theresa Schubert tries to encourage people to transport beyond their usual way of thought. Offering a dream as an entry point to her new installation is a good strategy to help visitors have an experience they could connect to and remember afterwards. This dream narrative opens an alternative view of our reality and how it may compute the world.

Also, I think our life is very structured and complex, so in general, we need more dreams, the artist concludes.


Hylē is on view until Sunday 19th June at Atelierhof Kreuzberg in Berlin.