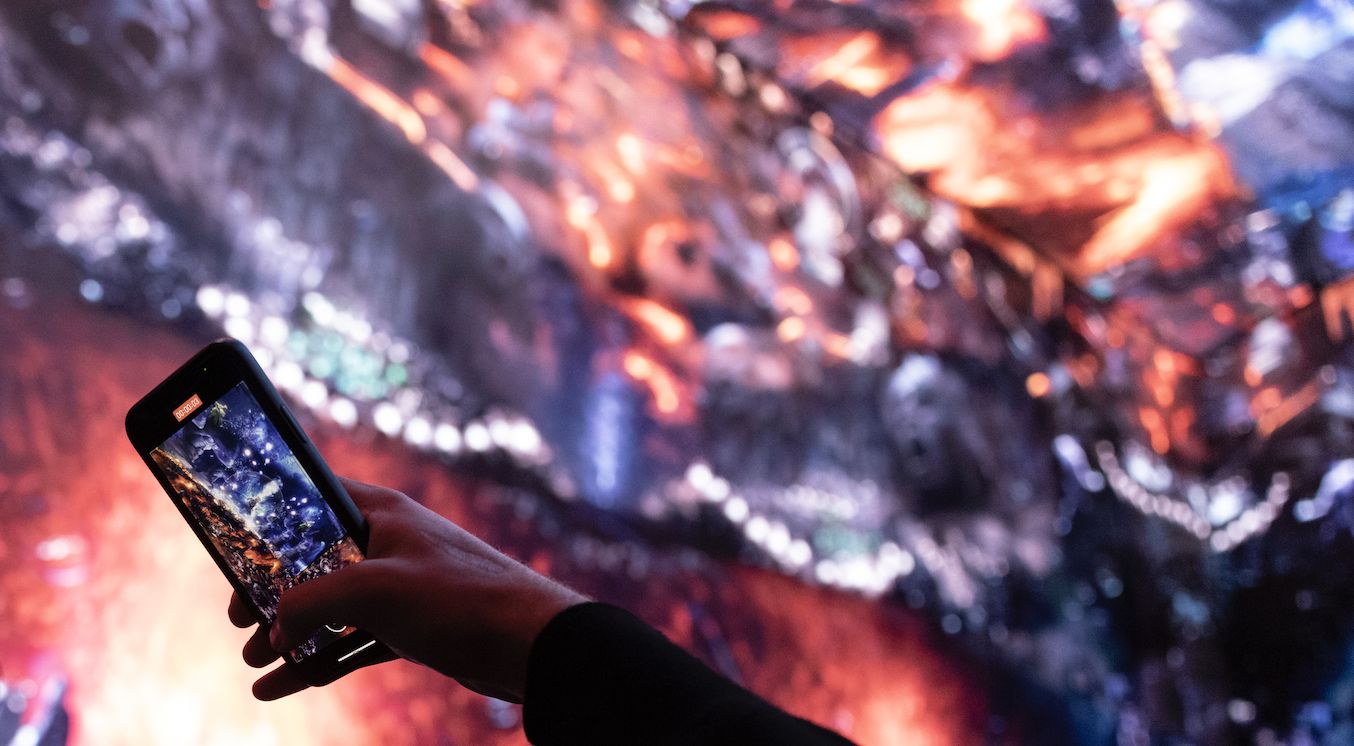 New-Zealand born Berlin-based Simon Denny’s creative practice reflects an interest in technology and its advancement from the technical perspective and more profoundly explores technology’s sustained influence on global cultural and political development, with a particular focus on the tech industry.

Dotcom Séance is an expansive digital installation that reflects Simon Denny’s work’s core facets. One thing Denny tries to do in various ways across his practice is to explore the culture around technologies like blockchain – to poetically unpack the energy, the economic promises, the ideologies, and the attention that consolidate around them. Art can offer different views onto dense and complicated innovations – making these developments more perceptible and affecting is a big part of what artists can do. And Dotcom Séance looks at how the technology business influences, but has also been influenced by, broader social dynamics: it tells the story of a number of companies that failed in the early 2000s, in the so-called dotcom crash, but whose models or products proved, in retrospect, to be prescient. Denny explained over Email.

At the bottom of the Dotcom Séance website, there’s a quote from Marc Andreessen: “there are no bad ideas in tech, only bad timing.” Andreessen started Netscape, one of the early graphical web browsers, when he was still an undergraduate and is now a prominent Silicon Valley VC investing heavily in Web3. Looking at figures like Andreessen, who have seen so much of this change firsthand and unpacking the worldviews that have shaped them (and the impacts their thought-leadership has given rise to, in turn) can yield insight into how this influence unfolds. Denny continued.

Outernet Arts, a new and free public art initiative heralding one of Europe’s largest digital exhibition spaces, commissioned the show specifically for their London launch. For Dotcom Séance, Denny has selected 21 dotcom-era companies declared ‘dead’ in the wake of the ostensible dotcom crash in the early 2000s, with the purpose of “resurrecting” their existence as it stands in a contemporary setting. The idea was to hold an “on-chain spiritism session” where the new tools associated with Web3 reanimate some of the Web1 companies that failed when the dotcom bubble burst. The companies were selected from FuckedCompany.com, which lists the names, years of operation, descriptions, and original logos of businesses that went under. A number of companies’ descriptions were fed into a text-to-image generative adversarial network (GAN), which created a series of new, AI-generated logos for each.

Guile Twardowski, the illustrator from CryptoKitties (which, in 2018, was one of the first visible art projects to use the ERC-721 token standard), also designed a new logo for each company inspired by the AI outputs. The logos were sold as NFTs, which could be minted through dotcomseance.com. By holding the NFTs, people can act as “employees” of the revived companies: the person who owns Twardowski’s rework of the logo is christened the CEO, and all the people with AI logos are termed “middle management”. So the project reflects on how emerging technologies can also engender different organisational forms – in this case, a DAO – to give new energy to ideas ahead of their time and have reverberated around the collective unconscious ever since. Denny told us when asked about the intellectual process. The new logos are scattered about the screens and move in this intricate choreography, including some animated in 3D, with ownership data about the corresponding NFTs displaying and updating in real-time. The installation is like a crypt where the ghosts of the revived companies haunt, bubble up to the fore, and recede – the return of the digital repressed. The logos’ choreography also rhymes with the cyclical history of business models that we see in these companies: certain ideas never went away but remained latent, held within the unconscious of the internet, to be revived when the market was finally ready for them.

The commission, organised by Outernet Arts, marks the launch of a year-round programme. The art programme takes place at Outernet London, a brand new media and culture district at the centre of which is The Now Building, the most advanced immersive space to date featuring 23,000 square feet of floor-to-ceiling, 360-degree, 16K screens across four storeys.

The space itself is a monument to the ways technology shapes experience – and lends the installation this affective charge; given that its scale is so immersive, one question we can not help to ask Simon Dennys is how he copes with technology (screen/digital) overload. I like podcasts as a way of absorbing information without looking at screens – enabling me to multitask several relaxing activities simultaneously. Mat [Dryhurst] and Holly [Herndon] ‘s Interdependence is always a go-to for hearing about experimental frontiers in art and technology. I also like Acquired, which narrates the stories of various companies. Denny told us. He is also constantly buying underappreciated cultural relics on eBay, like a board game called “Seastead”, scarves from the estate of Margaret Thatcher, and some personal stationery from Bernie Madoff.

On a more personal level, Denny told us it’s meaningful to be exhibiting in London again. His first show in London was in 2015 and occurred at Serpentine Galleries. The show, Products for Organising, touched on specific concerns that also feel present in Dotcom Séance – tracing different lineages and cultural implications of tech’s sustained impact on society – so it’s cool to be back in London and potentially revisit some overlapping considerations in this context.

Dotcom Séance is on view in Soho London every Sunday between 12.00-18.00, from 16 October through 4 December 2022. While Outernet artistic director Marco Brambilla will present his piece Heaven’s Gate for the first time in Europe in February, and Acute Arts Artistic Director Daniel Birnbaum will conceive Hilma af Klint’s temple for the first time in December.