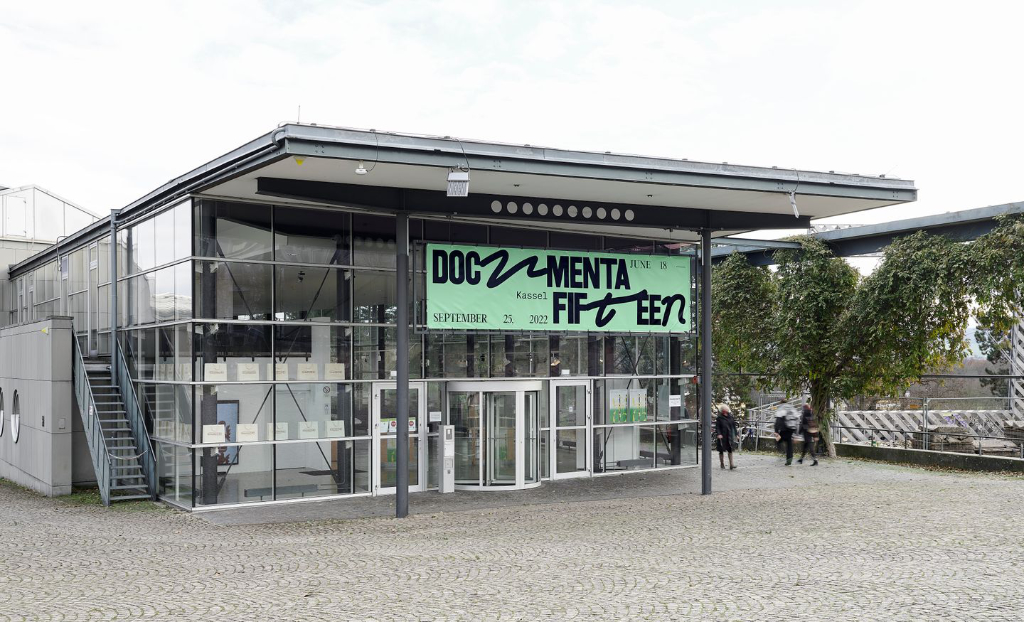 Lactic fermentation is a metabolic process in which glucose turns into cellular energy and lactic acid. This is a process in which a substance breaks into a simpler substance. This disintegration shows that a sum adds up to more than its elements in the realm of matter. Fermentation, ferment and acid accusations have been the sour stories that have saturated documenta fifteen’s spaces shortly after its opening.

After a five-year-long break, documenta fifteen opened its doors. They occupied multiple venues, hosting a massive art exhibition coinciding with an extensive programme of participatory events taking place over 100 days between June and September 2022. Rigidly rooted in the German town of Kassel since 1955 (through on previous special occasions having established links with locations like Kabul or Athens), the fifteenth edition of this famed art festival, more than anything else, tests this year the new grounds of ‘the radical’, be it economies, art production, cultural dissemination, display, mediation, collaboration or systemic structures.

documenta fifteen has been curated by the Indonesian artist collective ruangrupa. Not only the fact that ruangrupa collective is the first collective to curate a documenta but also the collective’s practice of ‘lumbung’ makes this year’s edition a truly outstanding one, deviating decidedly from the traditional conception of what the ‘museum of 100 days’ could ever mean. Literally, ‘lumbung’ translates to a communal rice barn in Indonesian, and when used as the main theme for the art exhibition, lumbung does not pose as a concept but as a practice.

As a result, the 2022 show is not static but constantly evolving, vehemently mutating and deliberately disintegrating. Rehearsing new ways of organising in the contemporary artworld, culture and society; sympathising with the growth in popularity of Decentralised Autonomous Organisation (DAO) models, questioning ownership and distributing control, the ruangrupa collective used the idea of ‘Ekosistem’ to describe a collaborative network consisting of invited 14 community-oriented collectives and organisations, whose impact has been intended to last beyond the 100 days of documents.

This ‘inter-lokal’ network of participants is a complex adaptive structure through which knowledge, money, spaces, ideas, programs, and the platform for additional contributions from outside the main network members are shared and linked. Decentralisation, distribution of agency and horizontality have characterised the curatorial work of the Indonesian collective. Through an extra-ambitious public programming and welcoming intervention from the public, they have vitally tested new grounds for future commoning, dissemination of knowledge and art exchange. This has felt like the practice of chaos under control, allowing for unpredictable creative contamination and challenging the state of post-pandemic distancing contemporaneity. Such an unstable shape of the show, entangled communication channels and uncertain ownership of creativity have resulted in too tricky transparency, something utterly incomprehensible to the patriarchal gaze of the western world.

Contesting the radical economies models, one of the collectives invited to practice lumbung during documenta fifteen was INLAND, a project examining the role of territories, geopolitics, and identity, polarising culture into the countryside and the city. Started in 2009 by artist Fernando García Dory, having initially focused on Spain, today INLAND is an international collective with a radio station and an academy, producing shows; making cheese; contributing ideas on rural development to the European Union Commission; promoting a European Shepherds’ Network, while currently also coordinating the Confederacy of Villages network.

For documenta fifteen, INLAND uses agrarian economies as a model to speculate on new ways of exchange and to work together. cheesecoin is what INLAND has proposed. As a response to the decentralised digital currencies, like Bitcoin, cheesecoin is not a cryptocurrency. It does not require any wallet or blockchain, given the environmental cost, sheer superfluity and scam nature of many cryptobased economies; but; instead, it is based on affect and abundance. The work highlights plentitude and multiplicity rather than scarcity, while the idea models a gift economy, in which things are given away rather than obtained, to establish an intermingling of relations that one could experience in a neighbourhood or a peer-to-peer exchange.

cheesecoin is not a currency or means of payment but a smear for the ‘internet of stink’. This is a network of fungi, bacteria and moulds, a decentralised autonomous system that ends up as cheese. Instead of a tally stick, there is a gift stick. To give means to gain. At the Museum of Natural History Ottoneum in Kassel, 500 cheesecoins were scattered around the exhibition space. What kind of form they might take is hard to guess. The creation of cheesecoin beyond all reminds us that the natural processes and the microworlds of tiny organisms control the technology, not the other way around. There is something different about documenta this year that makes it even more apparent that there are ways to organise with others outside of the top-down structures or standards of work that stop us from seeing the usefulness of the useless.