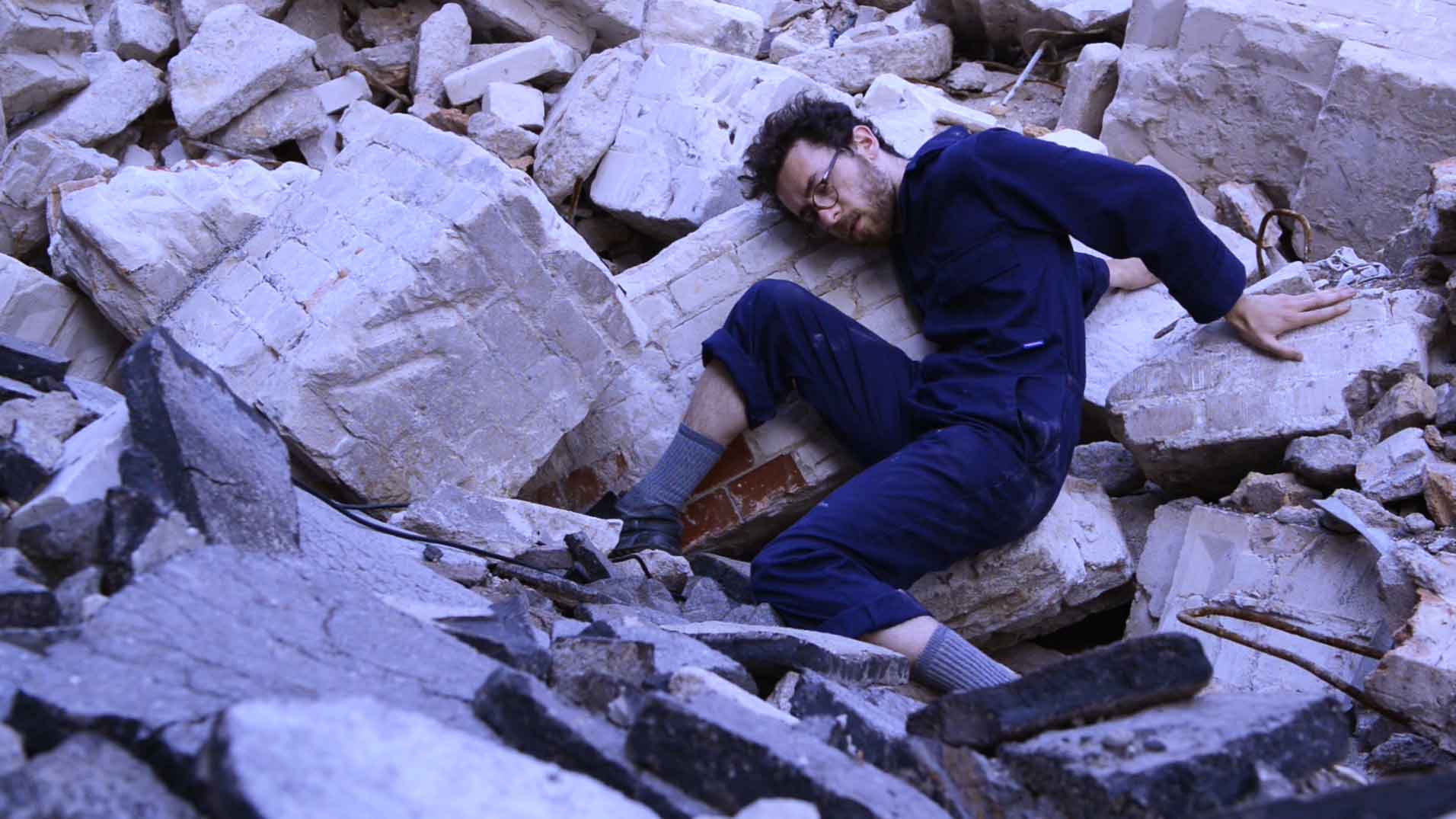 Insight: Brad Nath, swaying along with the sinister whispers of the rubble

Chalky rustling fills the room. The dark stage reveals an assemblage of thirteen cored building bricks stacked on top and beside each other like a group of ritualistic totems. Heavy spheres, attached to long wires and placed into some of the hollow round tunnels inside the bricks build up a network of busy connections between this curious gathering. While the cryptic talk of the material rattles on, a numb base in the background is swooshing in shock-waves so fast that seems like a gust of wind zigzagging around the corners of a labyrinth. A layer of soft murmuring is growing stronger and harder resembling heavy irdenware on a shelf animated by the tectonic shifts of an earthquake.


Decreasing back to a secretive tapping the viewer is given a chance to notice another body moving silently around the chatting towers. It’s Brad Nath joining the conversation, stacking, tilting and rotating one brick at a time or softly scraping two over another. Setting one foot on a lower pile of bricks while reaching over to touch another, his halting movements congeal into static postures that make his body appear like a marionette moved around the scene. Who is the choreographer in this arcane spectacle?

Some time into architecture education at Cornell University, New York, Brad Nath was seeking to merge these art forms when a couple of years and many attempts later a Brick, amplified by a cast-in speaker, finally revealed itself as the missing link that enabled him to do so. Since then, the Berlin-based sound artist has continued experimenting with sound and material in the context of our built environment to explore its sonic materiality. The mere extent of his iterative inquiries in amplified bricks, using different materials such as plaster, silicone or dirt and the poetically nuanced diversity of its results is what fascinated me about his work from the beginning.

As we are invited to carefully listen to a substance considered as mundane and “dead” as a construction brick, a wide spectrum of expressions emerges. Given a voice of its own through sonic amplification, the world we are building for ourselves lets us become aware of our stance in this constellation. The brick is a fundamental building module of agrarian capitalist civilisation. Concrete is the most manufactured material on the planet. It is unquestionable that the urban layer (which I read as the Anthropocene) has been composed without listening to its impact, or perhaps more explicitly, to silence the unbuilt environments which existed before. Brad Nath explains.

As in most discourses around representation, power is a historic constant of the equation. Interestingly though, during Nath’s performances, power becomes relevant in both senses of the word – as in Physics understanding power as a function of energy through time, but also in a political sense. Therefore, when asked about his motivation, the artist states that what matters more to him than the sound of a brick itself, is the relationship formed between a human listener and a nonhuman brick – that Listening feels important due to its ability to encourage reflection, openness, and empathy. Could this experience of listening to the substances we all inhabit help us move away from anthropocentric world views and shift how we think about the built environment as a whole? Consequently, from our new perspective as listeners, the shiny white-cube idols of modernist Starchitecture reveal the conflict they have so successfully managed to negate – the fact that they are, like ourselves, no sleek temples of infinite youth but organic formations, ageing and decaying over time.

What environments might emerge when we listen to what we are doing? For Nath, the perceptive practice of giving rubble the ability to speak means taking a step back and moving away from the seductive power of rash solutions offered by Sustainable Architecture.

To me, it feels undeniable that the role of the architect must change. Buildings that are being designed today will codify carbon emissions for many years to come. And the problem, of course, is that the market does not want to allow architects to be sustainable.

He elaborates when being asked about the complicity of the architect in the ecological crisis the world is facing today. But even though this might seem like he has lost faith in the discipline altogether, Nath insists that in fact, it’s the other way round. It is clear to me that there is so much work to do. It feels like I am desperately searching for other ways of taking care of the relationship between humans and the built environment. Maybe this is where I believe the sustainable architect should start from.

His attempts to reverse the standard conversation between bodies and bricks and to perform this either through his own body or through the bodies of visitors, therefore, becomes a humble and attentive way of creating a platform for exchange and discussion with others. An overwhelming amount of my performances/installations result in architects approaching me to talk, he says.

Evolving his practice, Brad Nath has recently started to move from the sonification of construction material towards experimenting around the amplification of whole structures. Being enrolled in the MA Solo/Dance/Authorship program at UdK Berlin, he is doing body-based research around and within buildings that are in a moment of tectonic transition – like demolition or renovation.

In the past year, there has also been a massive shift in the way we perceive our private spaces whose solid walls have surrounded us with protection and enclosed us in isolation. Nath has reacted to this new urgency to interact with the materiality of our homes with a project called „Brick ASMR“. It was developed while isolated during lockdown earlier this year. In a series of videos, we see his hands rolling an iron sphere over the rough surface of a clay fired brick, tapping gently on moulded industrial wax and soothingly stroking the raw surface of a beam. If you have ever had a desire for architectural intimacy, these clips are serving it with virtuosity.

And as the world is accelerating to grow denser, warmer, sicker there is ever more work to do for a „brick whisperer“, a mediator between the ruling matter of human bodies and the silenced matter around us that will eventually decide over our fate for better or worse.