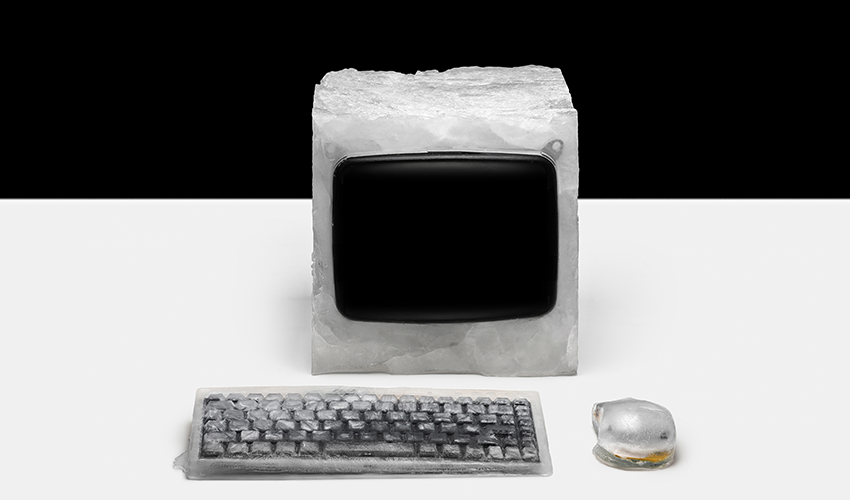 Insight: Beyer and Sizemore’s speculative material research ‘For the Rest of Us’

Coming from a background in Industrial Design, the California based duo Hank Beyer and Alex Sizemore are working at the borders of Art and Design, Sculpture and Product. Their project “For the Rest of Us“ is the outcome of extensive research on the seven local materials ice, clay, coal, peat, lard, honey and limestone. As agents for their reflection on today’s technological mass-products and globalization, each material was used to model a desktop computer-casing. We did this to purposefully differentiate the objects from the present, allowing you to look back and imagine an alternate reality and how things could have been– the designers explain the raw und unpolished look of the product casings.

In line with their main reference, a 1980s Apple advertisement, the personal computer, native to the California region, functions as a vehicle for their speculative juxtaposition between material and product: We found that creating objects that are in some ways polarizing and in other ways familiar is a powerful way to start meaningful conversations– they argument about their choice of the archetype.

With the advertising slogan ‘Introducing Macintosh, for the rest of us’, Apple, at the time,  claimed that the existing product was too complex and technical, while the Macintosh was designed for everyone– Beyer and Sizemore say. The project further develops this idea by reconsidering the material and emotional implications of a technological product, not just its usability. In recent years, the design world has been shaken by a vital conversation around the complexity of today’s product and material chains.

Evermore globalized production lines made it nearly impossible, for the rest of us, to understand the origins of the objects we are using day to day. But the message of the project is meant in a constructive, rather than gloomy way. Being asked about their mission they state: We don’t want people to view our project and feel resentment towards globalization, to feel that we want to replace industry or to consider new materials only for commercial merit. We do want people to question the implications of globalization, consider how unconventional materials can change product relationships, to serve society and to search for new values.

The will to navigate the focus back from global to local even presents itself in the duo’s design process. For their research on regional material sources, they took enough time for on-site observations and investigation. Along the way they discovered the unique stories and values of each material for instance during a visit to a town in New York, which hosts one of the last remaining commercial Ice-harvests in North America.

Every winter, the town’s inhabitants gather to cut ice blocks out of the local lake, used for air conditioning during the summer. Closing the circle, these ice blocks later melt back into the lake. Building on that story, the designers raise questions about the adequate lifespan of contemporary technological products, thereby displacing the notion that materials best for the industry are best for humanity.

Finally, to craft a series of unique one-offs, each individually formed according to its material properties, once again delicately contrasts the mass-produced reality of today’s technological consumer products. In that sense, the results can be seen as ‘Designs for debate’ or as Beyer and Sizemore summarize it: Art and Design help us critically reflect on the past and present in ways other mediums can’t. With both, you can propose new systems and question old ones in a tangible and immediate way.