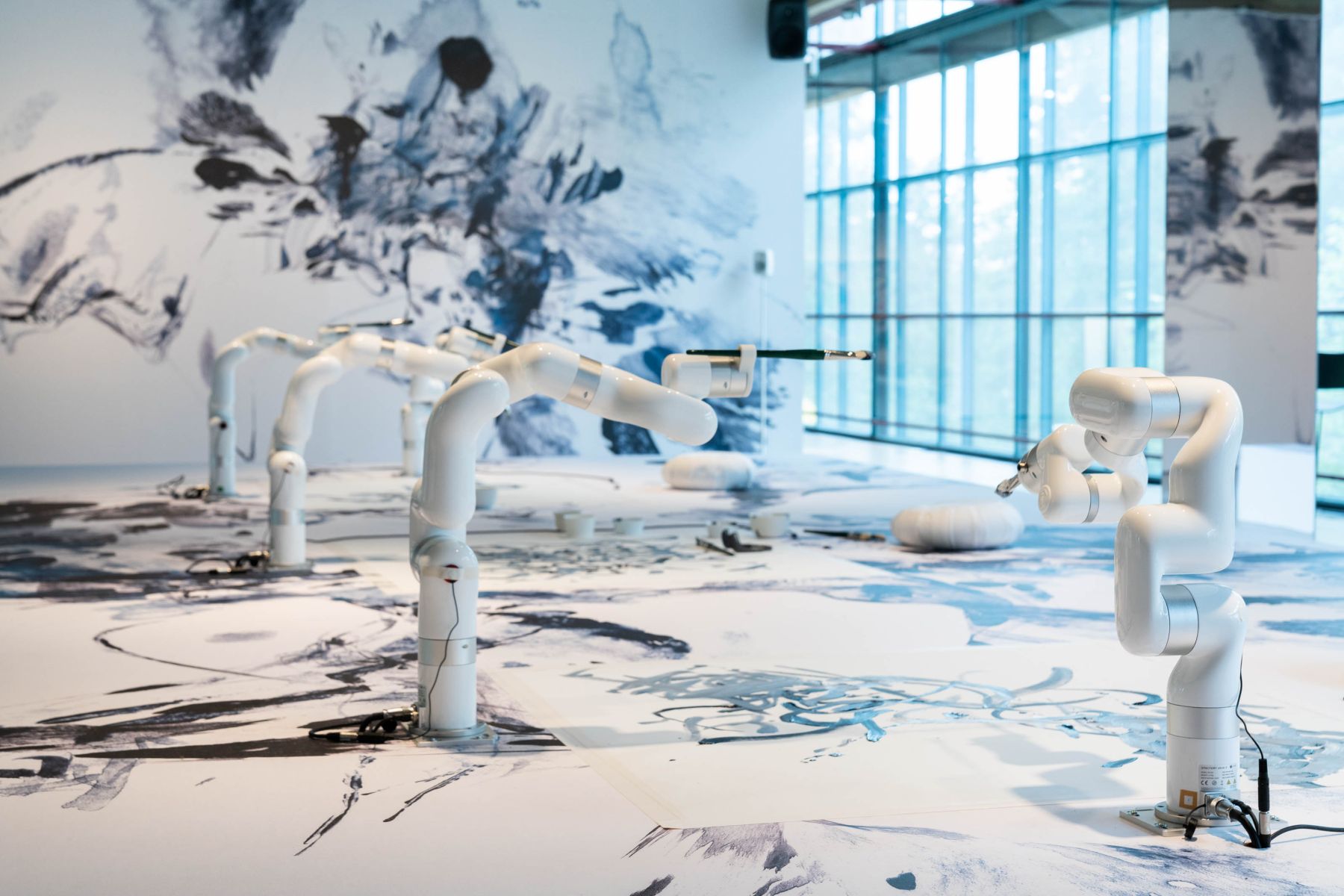 For nearly a decade, the practice of artist and researcher Sougwen Chung has been evolving around co-creation with robotic units. Each generation of the artist’s custom robots, all called D.O.U.G (Drawing Operations Unit Generation), reveals a new level of human-machine interaction, from simple mimicry based on positional translation (D.O.U.G_1) to biofeedback through biometric recording (D.O.U.G_5). In the latest installation, Assembly Lines, the artist explores different states of meditation using multi-robotic kinematics and biosensors. It is presented at the Museum of Contemporary Art Espoo (Finland) as part of the exhibition In Search of the Present.

The installation name is a play-on-words, deconstructing the idea of assembly lines as automated processes in industrial factories. In Chung’s work, Assembly Lines become a gathering, contemplation, and ceremony space. Chung builds a human-machine configuration linked to a state of presence, of a kind-of ‘inactivity’ in service of something beyond mere extension. I was thinking of Anna Tsing’s writing when the idea for the work came about, ‘The concept of assemblage — an open-ended entanglement of ways of being — is more useful. In an assemblage, varied trajectories gain a hold on each other, but indeterminacy matters. To learn about an assemblage, one unravels its knots, the artist recalls.

Like other Chung projects, Assembly Lines takes many forms — research, robotic system, dataset, performance, visual artefact, and kinetic installation. The installation is activated through a live performance which begins with a two-minute meditation. The audience also participates in the process along with the artist. Chung explains the purpose of this introductory ritual, it provides a space of dynamic contemplation and stillness, as the multi-sensory components of movement, drawing, and sound fill the space of the performance environment and paint strews about the canvas. It is an unfolding of a quiet, daily, personal ritual in the space of a kinetic installation.

The artist has been learning how to meditate over the past few years. And the readings into Vedic meditation have influenced their latest work a lot. Chung was particularly fascinated by the space of experience accessible through this practice, the idea that experience is a precursor for the matter. Delving deeper into the topic, Chung adds: There is a state of consciousness the practice of meditation facilitates access to that operates at a sub-level of experience. It’s suggested that a level of conscious experience in Vedic meditation precedes and is somehow more true, more concrete, than the level of consciousness of our everyday lived experience. by measuring my Alpha brainwaves, I discovered in both meditation and the flow state of drawing, the levels were elevated. The readings made it possible to construct a model of interaction – a human and machine configuration, if you’ll indulge me, to experience that state of flow, of consciousness, in an alternative way.

During the performance, D.O.U.G._5 responds to the artist’s biofeedback through the use of an E.E.G. headset. Thus, the human subject’s calmness and “in-activity” are the conduits for the movements of the drawing robots and their brush strokes. Biosensors are linkages, allowing one to establish a connection with a different way of being and expressing. It’s funny – meditating through biofeedback and robotics –  it’s deeply un-seating but also grounding at the same time. Maybe I’m drawn to developing processes in which both sensations can exist simultaneously, Chung wonders.

Sougwen Chung always strives to devise and explore feedback loops — processes tangled up in the intricacies of call and response. And Assembly Lines is no exception. The artist emphasises that her main interest was creating a process that would deepen the meditation experience. Said another way, I wanted to build a relational, robotic system to influence an internal process, a reinforcing configuration.

As for meditation, Chung believes experimenting with its various techniques through performance and research is a kind of virtuality. Being in the conversation of art and technology for as long as I have, there’s so much talk about virtuality and embodiment in the medium of digital art. I think we sometimes forget that virtuality and embodiment are not medium-specific. Assembly Lines might be a reminder that the virtual exists within us. There are very old practices that engage with embodiment – they came before us and will outlive us. A reminder that while the future stands firm, we move in infinite space.

Among other things, meditation for Chung is also a radical act of deceleration, of sitting with oneself, of searching for a way to be within the present — a definition that contrasts interestingly with the field the artist works in. Technology greatly affects our sense of time, destroying and distorting the concept of the present. So, meditation as a ritual/ceremony can also be seen as a shared seeking of the endangered present.

The artist was very inspired by the exhibition direction, In Search of the Present. And the development process behind Assembly Lines gave the artist a space to explore different time concepts. Chung explains: At the risk of sounding simplistic, by doing so [teaching a robot to perceive time], I learn a bit about time in new ways. The application of Bergsonian time, Newtonian time, centralised and distributed time, and how a clock is measured in work, there’s a lot of “worldbuilding” in the space of art and technology these days, but in the space of robotics, there is a quite literal world building at play – the internal model of the world in which the machine believes it exists. The terrain. It operates as a metaphor upon which the system is constructed. I think of this quote by Rosi Braidotti, ‘Becoming has to do with emptying out the self, opening it out to possible encounters with the ‘outside’. It is predicated on the ethical ideal of “true relationality”, whereby the subject seeks the boundary between self and other(s), balancing their responsibility toward both and sustaining openness alongside the need for self-preservation. Occupying the “borderlines, or lines of demarcation between my and other external bodies.

Assembly Lines is also a carefully thought-out sonic environment. Dedicated contact microphones sound robotic movements in an octophonic sound space by Neda Sanai, set to a score integrating birdsong and natural field recordings by Aquarian. In addition, in the debut iteration of the installation, viewers will also witness a spatial dialogue with the Finnish forest at the EMMA Museum; Chung adds that the quality of light becomes a primary contemplative feature strewn through the installation.

Assembly Lines was produced by Sougwen Chung’s Scilicet studio under the guidance of the artist and the co-director Tessa Nijdam. The three paintings resulting from the performance form part of the installation. They will also be displayed as artefacts within the In Search of the Present group exhibition, including an accompanying short film, Assembly Lines: Expanse [extending].


Assembly Lines runs until 15 January 2023 at the EMMA Museum.