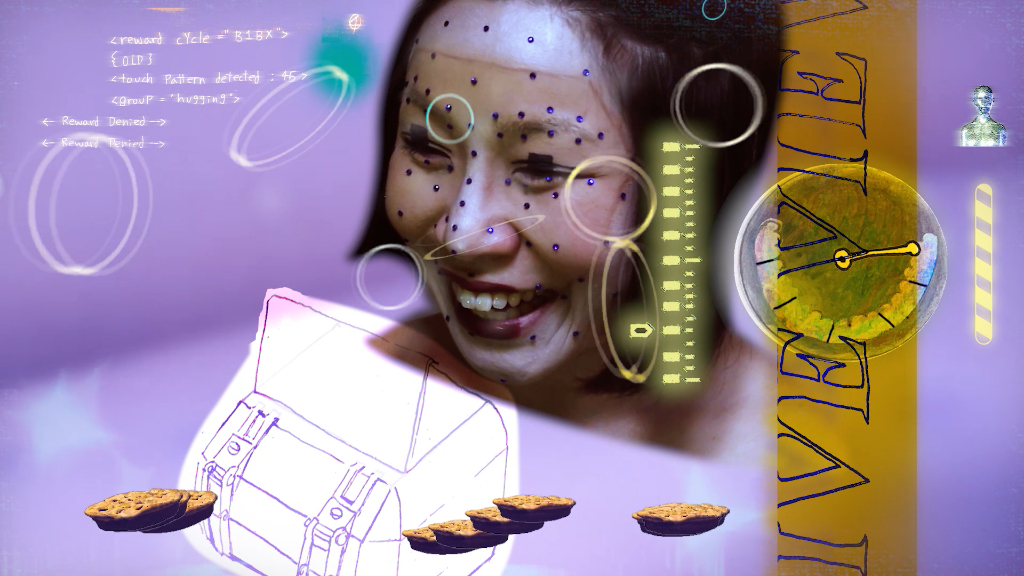 “Queer East is an LGBTQ+ film festival that showcases rarely-seen queer cinema from East and Southeast Asia. Seeking to amplify the voices of Asian communities in the UK, the festival explores the forces that have shaped the current queer landscape in Asia, and aims to encourage more inclusive narratives.” – Queer East.

Exploring queerness as an imaginative practice, the Queer East program Artists’ Moving Images: Destination: Other Worlds, curated by April Lin, explores notions of imagination, dreaming, and the powers these concepts hold. The programme centres on speculation, imagination and dreaming as critical strategies for shifting our notion of what exists in the realm of possibility.

There is so much to queerness that feels foundationally imaginative. Growing up in a world not designed for you creates a foundational space for imagination within your existence. What to do when the world around you has no room for you? You build another one. Imagine another existence. Contemplate another time. Push for false memories. Interpret your dreams and make them tangible. Queerness is a fine line between the real and the imagined. It causes you to understand and dissect the boundaries of truth within the reality around you and yourself.

These imaginary worlds take you to realities unfamiliar to explore beautifully relevant themes. For example, ideas of vigilance, monitoring and censorship were explored in Shapeshifter(s) by Khairullah Rahim, where you are invited to look into the uncanny parallel between policing pigeons and marginalised folks. The metallic, bedazzled, anything but natural pigeon head reinforces feelings of restraint. Similarly, navigating the line between desire, shame and surveillance was Yarla Allison‘s Datafication Act: May Ian Valley 0101, a looping surrealist dreamscape which gamifies one’s behaviour through sex acts. The short film takes us through the process of extraction and analytics through the journey of Subject 06s experience. Finally, Royston Tan‘s Cut is a cheerfully captivating musical set in a supermarket. It follows a fanboy who praises a censor for her dedication and hard work to the art of censorship. It is a profoundly entertaining musical which shines a light on the harsh censorship in Singapore.

Worldbuilding as a tool of deconstruction and construction of the self is a process familiar to queerness. AI Mama by Asuka Lin is a post-cyberpunk short shot on Super 8. It is centred around Kei, a young programmer who attempts to resurrect their lost mother by coding an AI. The short follows through with a complete collapse of boundaries between mother and child, creator and creation. It pushes the audience to understand that the body exists beyond our ideas of selfhood—a constant birth and rebirth cycle. The film allows the audience to expand their perception of self as a human and more than a human entity.

How to become a true post-human by Huh Need-you is an explorative work that attempts to uncover a new sense; through a rebirth as a post-human being. Cambrian Explosion by Fuyuhiko Takata is a viscerally stunning exploration of the, at times, violent methods of change that queer people go through. The beaded blood and the romantic song deeply capture the pain of longing to be someone you were not born to be.

Memories, archives, ancestors; creating queer history. The Book of Permutation = Tale of a Dying House by Nuka Nayu & Harry Appleyard interrogates how change can be evoked through explorations of reality and personal & collective history. It looks through traces of what others have left behind, questioning how to decode the past. A multi-temporal reality where time is non-linear. Running with the non-linearity of time, Tr333 by April Lin urges us to reflect on the interconnectedness of the beings on this planet and the epigenetic traumas that form and inform our present and histories.

A Spider, Fever and Other Disappearing Islands by Natalie Khoo is an experimental documentary that explores the director’s grandmother’s migration to Singapore. It weaves memories of the past through the spider’s routes, exploring the migratory route of her grandmother. It reclaims the act of storytelling as generative and fluid, creating spaces for the ghosts, disappearances and feelings that come from recounting re-imagined familial and personal histories. Ex Nilalang: From Creature by Club Ate uses myths and mythology to explore queer identities of the Filipino diaspora. It pushes us to reflect on the transformation of existing mythologies and the future of folklore. It reads between the lines of personal folklore and mythologies, creating new spaces for queerness in the past, present and future.

While at the festival, I also had the immense privilege to watch Zhang Yuan‘s Destination: East Place, West Place’ 东宫西宫’ (1996). This film is breathtaking. It beautifully captures the relationship between pain and desire: lust and shame. Moulding, twisting and rethinking polarities of love and loss. Being that it is often referred to as the first queer Chinese film, it brings forward ideas of writing and re-writing queer history.

In the movie, the main character Han Si’s perspective shifts through memories, the present and scenes of traditional Chinese Opera where both people playing the romantic leads are women. This constant shift in temporalities fosters a shared experience. It allows for rewriting history and traditions in the hope of finding space for queer existence. Viewing history as non-linear and making space for yourself in collective history as a queer person can be transformative. I urge anyone queer to imagine the spaces in your culture that have made your queerness feel at home.

It was an honour to attend Queer East this year. So much of queer experience has been erased and underdocumented. For that and many other reasons, it is impossible to undermine my gratitude for the existence of Queer East and all the filmmakers. They are documenting and showcasing queer perspectives. In the spirit of queerness as an imaginative practice, I leave you with the words of Han Si:  You asked me many questions. Now, why not ask yourself?