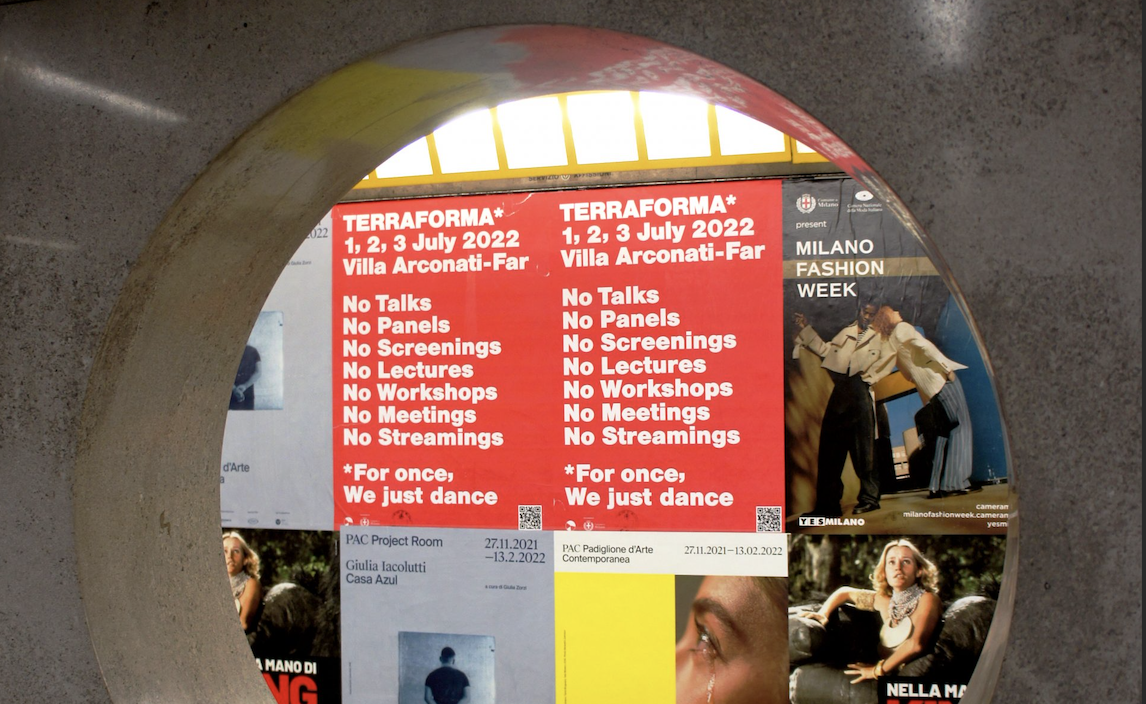 Terraforma, the experimental and sustainable music festival taking place in the special surroundings of Villa Arconati, in the North of Italy, is back from July 1st to 3rd. After two years of covering and spirling new orbits, Terraforma will release rhythm and frequencies, with a seventh edition which will on its most radical and original essence: the experience of being together through music and dance.

For those who may not be aware, Terraforming is the theoretical process in which life on a planet becomes possible through the creation of an atmosphere. Terraforma is the manifestation of the team behind the festival’s belief that new dimensions can now be terraformed in regards to sound and music experience. Three days of festival where music is the catalyst: a timeless centre of gravity for energies, with a breaking point from which sounds and images create a sense of suspension capable of pointing us towards new perceptions.

Terraforma, which is produced by the creative agency Threes, has strived by innovating the concept of musical experience while emphasizing the relationship between event and impact. The location is a central player for the festival -the woods of Villa Arconati just outside Milano- and the catalyzer of involving artists who experiment with new ways to reduce the distance between art and life. Music aimed to take humans back to their natural frequencies where the sense of rhythm is once again bound with the environment. Where we resonate in sync with the trees around us and the soil below our feet. Accordingly, Terraforma is produced following sustainable practices, integrating aspects from production to consumption of resources.

For this year’s edition, new horizons will be terraformed the team says, with the temporary autonomous zones and organic environments where music, nature, and people can come together as a whole, where the sense of rhythm can once again be bound with the natural frequencies of the environment.

Some of the highlighted performances include the new show by Berlin-based Finnish duo Amnesia Scanner, who will present AS Unplugged. The project is set in a mysterious wood and is conceived together with NY-based visual artist Freeka Tet. Terraforma and Amnesia Scanner, in partnership with Bottega Veneta, who are also lead partners of the festival, will realise a site-specific and immersive performance inside Villa Arconati’s Labyrinth, in close dialogue with the surroundings of the park.

Other special performances will be by acclaimed techno, dub and atmospheric craftsmen Voices from the Lake (legendary Donato Dozzy and Neel) who reunite for a unique performance after 10 years, as well as  Autechre, the legendary warp affiliates British duo.  Another British classic dance act, Higher Intelligence Agency,  formed by Bobby Bird in Birmingham in the early 90s, will perform a grooved based electronica set drawing from new and recently released material as well as from his classic 90’s albums.

A bunch of artists will bring the most arduous rhythms and upbeat performances. Crystallmess, the French-born Ivoirian /Guadeloupean producer, DJ, writer, and artist based in Paris, will bring her sound that oscillates freely between melodic techno, afro-trance, and abrasive dancehall. ​​MC Yallah, the Kenyan rapper based in Uganda and an affiliate of Nyege Nyege will perform with french producer Debmaster for an explosive and powerful blend of sounds.

EXPAT, the band formed by artists Mykki Blanco and Samuel Acevvedo will focus on an intense, dramatic and theatrical live show, forcing their audience to be present, at the moment, only embracing the now. German techno pioneer Mark Ernestus’ Ndagga Rhythm Force delves deep into African music joining the forces with Senegalese sabar musicians. And Teto Preto, a union of generative forces involving many expressive forms, from music to theatre, from dance to fashion and everything in between, emerged in the midst of that dense cultural broth stirred by the independent party movement that revolutionized the São Paulo music scene, and nurtured by female and LGBTQIA+ leaderships.

More experimental sound will come from the hand of the sound artist Sofie Birch who has just released a new album, Lafawndah’s pop polymath sound who will perform live together with the drummers Valentina Magaletti and Sebastien. French artist Ange Halliwell makes transportive music from field recordings, choral vocals, delicate synths, and his own virtuosic harp playing and Moin, the new band by Raime’s Tom Halstead and Joe Andrews with percussionist Valentina Magaletti.

This year the team decided there wouldn’t be any talks, panels or other activities distracting from the music. Stimulating the sensibility to think about the present and the future in a new way, a cultural innovation sprouting from respect for the other and the environment by just listening and dancing.