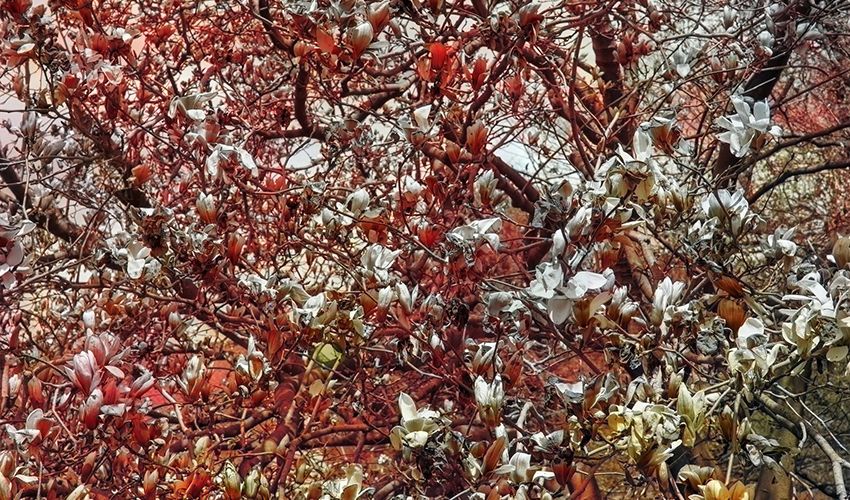 These are the central themes of American artist Trevor Paglen, known for investigating the invisible through the visible, with a wide-reaching approach that spans image-making, sculpture, investigative journalism, writing, engineering, and numerous other disciplines. The clandestine and the hidden are revealed in series such as The Black Sites, The Other Night Sky, and Limit Telephotography in which the limits of vision are explored through the histories of landscape photography, abstraction, Romanticism, and technology.

Paglen’s investigation into the epistemology of representation can be seen in his Symbology and Code Names series which utilize text, video, object, and image to explore questions surrounding military culture and language. Among his chief concerns are learning how to see the historical moment we live in and developing the means to imagine alternative futures.

Together, the works in the exhibition, named  Bloom, recall the “Vanitas” tradition in art, in which symbolic objects such as skulls, flowers, and books remind us of mortality, the fragility of life, and the vanity of worldly pleasures. In contrast to the vanitas paintings of the 15th and 16th century, Paglen plays with these symbolic tropes, bringing them into the present day and addressing new measures of mortality in the digital era such as Zoom, AI, policing, and even such threats as COVID-19.

The artist shares: Computer vision and artificial intelligence have become ubiquitous. The works in this exhibition seek to provide a small glimpse into the workings of platforms that track faces, nature, and human behaviour, and into the underlying data that structures how machines ‘perceive’ humans and landscapes. In this new work, I am interested in exploring the numerous examples of computer training sets creating AIs that reflect and perpetuate unacknowledged forms of racism, patriarchy, and class division that characterise so much of society.

Octopus responds to the current moment where periods of isolation, distance, and limitations on travel impact the way society works, interacts with each other, and experiences art. In this new reality, the digital and the virtual make it possible to continue to keep business moving, to socialize,
and to participate.

Other pieces include Bloom, a series of large-scale photographs that depict flower formations conceptualized by various computer vision algorithms created to analyse the constituent parts of real-life photographs; The Standard Head, a large-scale reconstruction of 1960s pioneer CIA agent
Woody Bledsoe’s mathematical model of a “standard head”. Conceived from the average measurements of the faces Bledsoe experimented with, Paglen reconstructed the “standard head” from rare information left behind in
Bledsoe’s archives at the University of Texas.

There will also be a series of new drawings and compositional paintings that are similarly based on mathematical simplifications produced by various computer vision algorithms and ImageNet Roulette is an interactive artwork that classifies people’s digitally-captured portraits according to one of the most widely-used datasets used for training and evaluating computer vision systems.

Surely interesting to see what an artist at the forefront of experimentation with these new technologies bring us about and explore meaningful reflections of what these technologies mean for societies beyond the overused “AI as an artist”.