Exhibition: ‘the eye, the eye and the ear’ by Trisha Baga at Pirelli HangarBicocca

Pirelli HangarBicocca presents Trisha Baga’s solo exhibition the eye, the eye and the ear running until 19 July and comprising of video installations and ceramic sculptures. It’s Baga’s first institutional exhibition in Italy and covers fifteen years of the artist production, from her first piece There’s No “I” to his more recent work 1620 produced on the occasion of this show.

Trisha Baga is an American of Filipino origin artist living and working in New York City. She combines video, painting, sculpture and found objects in immersive compositions that flood spaces with light and sound. One of the most innovative video-makers of her generation, in her work Baga deals with gender identity, relations between both the physical and the digital worlds, technological evolution, post-colonial societies, and themes tied to the psychological effects of globalisation.

Her work is in the collection of the Aïshti Foundation, Beirut; Julia Stoschek Collection, Düsseldorf; Moderna Museet, Stockholm; Museum Ludwig, Cologne; Whitney Museum of American Art, New York; and the Zabludowicz Collection; among others.

For the eye, the eye and the ear Baga brings together five video installations investigating the relationship between the body and the constantly evolving image technology, ceramic works produced since 2015 and six pieces from the series Seed Paintings (2017), composed of sesame seeds and foam.

Pirelli HangarBicocca is a non-profit foundation established in 2004 in Milan that presents major solo shows every year by Italian and international artists. Each project is conceived to work in close relation to the architecture of the complex.

Website https://pirellihangarbicocca.org/en/exhibition/trisha-baga/
(Picture courtesy of Pirelli HangarBicocca and the artist) 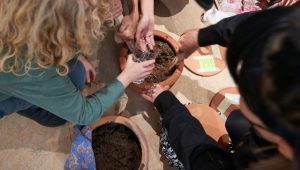 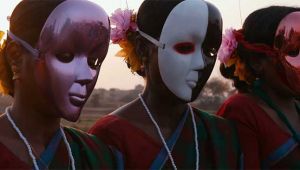