For his new body of works, Theo Triantafyllidis draws inspiration from video games and recent events of civil disorder in America. Looking at phenomena such as the rise of QAnon, the artist suggests connections between gamification, fantasy, and political radicalization.

The artist’s work focused on building virtual spaces and interfaces for the human body to inhabit them. He creates complex worlds and systems where the virtual and the physical merge in uncanny, absurd, and poetic ways. They are performances, mixed reality experiences, games and interactive installations.

This new set of works presented at the gallery space NOVO in Milan brings together a series of ceramic weapons: dark glazed stoneware works adorned with decorative details like tennis overgrip tapes, hair extensions and laser-cut acrylics. With titles such as Chadslayer, Snowflake and Stormbringer, they reminisce of the exaggerated forms often seen in video games and extremist ideologies which the internet culture has accelerated.

The ceramic surfaces reflect the light from a large display playing Radicalization Pipeline, a Live Simulation piece that runs on a gaming PC. Two seemingly endless hordes clash into a violent free-for-all, swinging large melee weapons and shouting with distorted voices. A wide range of characters – from citizen militias to fantastical creatures – enter the screen only to kill each other, wave after wave, sinking their virtual bodies slowly into a muddy landscape. The mood occasionally lightens up by the medieval covers of familiar pop songs that complete the soundscape conceived by the composer and sound designer Diego Navarro.

Website www.novo.ooo
(Image courtesy of the artist and NOVO 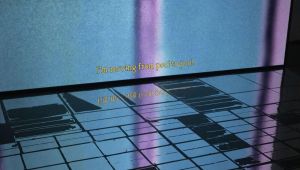