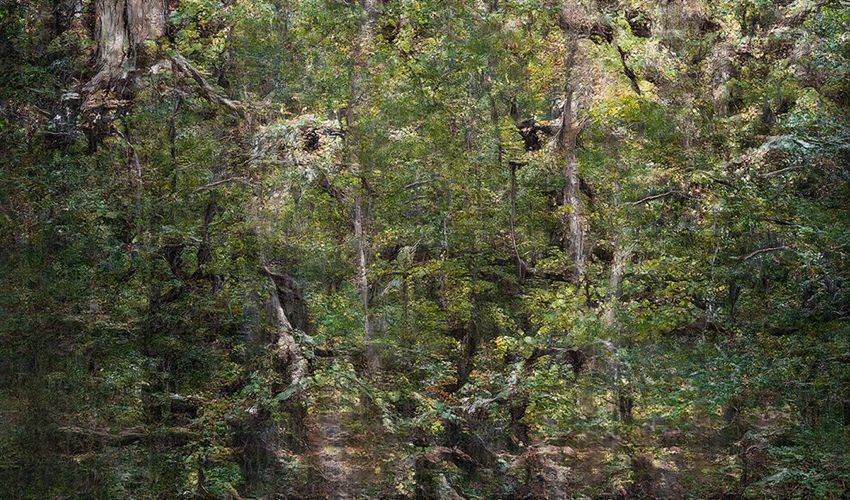 Berlin-based artist Andreas Greiner’s art draws on biology, biotechnology, and questions the impact of humans on other living forms. After studying medicine, anatomy and sculpture he focuses on time-based and sculptural artworks. The content of his work focuses on the anthropogenic influence on nature’s evolution and form.

By means of his creations, Greiner charts complex concerns and exposes vital issues in contemporary society, including environmental and ecological challenges – but in times of climate change and extinction of species, can these be adequately expressed in the language of art?

In this new exhibition, Jungle Memory, Greiner recreates nature, representing his research into endangered forests in Northern Germany and Poland, and probes the relationship between ecology and technology. Amid a simulated forest and light scenario that transforms the main gallery space, he presents a large-format video work made with the aid of artificial intelligence. A dataset comprising several thousand photographs shot in the ancient Hambacher Forst and Białowieża forests was fed into a digital calculus to derive the idea of a forest. The resulting images are layered and morphed together to create a cinematic dance of trees, bright and illusionary yet concerning and oddly foreboding of a post-human world. Another large-format picture, also generated by AI is counterpart with some physical sculpture, portraying this confronting forces of the digital and material.

The exhibition can be read as a cognitive and emotional collage that highlights, through a concrete local example, the interdependence of historical factors, economic decisions and climate change. Taking as a starting point the catastrophic situation of the forests of the Harz, the works address an immediate reality that is tied as much to past centuries’ silviculture as to contemporary global ecological choices.

With Jungle Memory, Greiner probes the question of whether, in our age of climate change and the mass extinction of species, the language of art is actually capable of adequately articulating these concerns.

The exhibition runs until 31st October 2020

Website https://dittrich-schlechtriem.com/jungle-memory/
(Image courtesy of the gallery and the artist)