Reshape the relationship between technologies and contemporary society,  stimulating the potential for a new collective consciousness: this is the core idea of I Magma, the latest project by Jenna Sutela – hosted by the Serpentine Galleries from 2 October 2019 to 12 January 2020.

Co-commissioned by Moderna Museet and Serpentine Galleries the ‘psychedelic’ work is composed of two elements: an application for mobile devices and a community of head-shaped lava lamps on display at Moderna Museet, Stockholm. The lava-heads act as a ‘seed’ in generating the app’s visuals and language. Using live camera footage of the flowing lava in combination with the GPS locations of app users, it offers daily readings based on the collectively formed shapes. As each new additional user downloads the I Magma app, the network expands, contributing to a remoulding and shifting of our shared future.

Exploring new possible forms of intelligence, the artist investigates altered states of consciousness and the creation of artificially intelligent ‘deep-dreaming’ computational systems that mimic the brain. Inspired by divinatory practices such as the I Ching, I Magma builds a bridge between ancient systems of knowledge and our contemporary attempts to divine the future.

Jenna Sutela works with words, sounds, and other living media, such as Bacillus subtilis nattō bacteria and the “many-headed” slime mold Physarum polycephalum. Her audiovisual pieces, sculptures, and performances seek to identify and react to precarious social and material moments, often in relation to technology. Sutela’s work has been presented internationally, including at Guggenheim Bilbao and the Museum of Contemporary Art, Tokyo. She is currently a Visiting Artist at The MIT Center for Art, Science & Technology (CAST).

The support of the Serpentine Galleries to Jenna Sutela’s project confirms the organization’s commitment to encourage new experiments in art and technology that this year has included augmented reality tool for visualising the UK’s extreme inequality by Hito Steyerl and a mixed reality ecological trail through the Serpentine’s local ecosystem to see and hear its species by artist Jakob Kudsk Steensen. 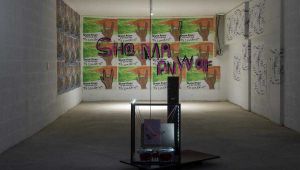