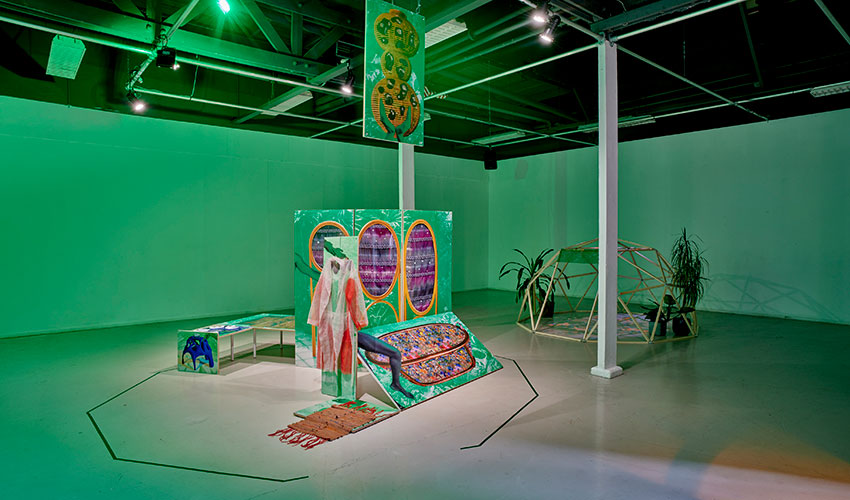 Hotel Symbiogenesis unfolds a story of an island in the near-apocalyptic future, in which various animal species, including humans, coexist symbiotically. In a speculative hotel room, a collection of artifacts made of fur and leather of the fictional animals is presented.

Hotel Symbiogenesis rethinks the human-nonhuman animal relationships by questioning how the human species have been valuing animal-derived clothing material. The aim of the project was to create alternative mythology, which is not a denial of autonomy and subjectivity of nonhuman animals, specifically concerning the consumption of their skin and fur. Hypothetical Studios speculatively constructed an island as well as the human and nonhuman animals dwelling in it. The island is a big, sympoietic cell that survives the nearly apocalyptic time, operating through the symbiosis of its dwellers. Humans are not exceptional in this relationship. Various rituals of the human residents of the island have co-evolved with the animals in the way that is far from one-directional and exploitative. They make their garments and objects using materials derived from the animals, which gives us a glance at how those humans cohabit with the animals. Designmatter and Hypothetical Studios invite the guests to a hotel on the island and provide sensorial performative experiences around the residents’ artifacts. Especially open during the COVID-19 outbreak, Hotel Symbiogenesis attempts to challenge the anthropocentric worldview still predominant among us.

The first major axis of the project was story writing. During this phase, Noam Youngrak Son, a design-fiction creator based in Eindhoven, created five different fictional animal species and elaborated on their ways of living. The concept of each animal developed into a tale about an ecosystem and eventually became a mythology about an island in which various animal species, including a group of humans, co-operate, co-evolve and withstand the ecological disasters. The narrative is driven by the following animals: Green Rodents, Color-adapting Reptile, Disaster-warning Birds, Bioluminescent Predator Squids, Memory Urchins. The exhibition proposes a combination of speculative leathers, objects, and stories by having the theme of a hotel room for the island visitors.
The hotel room, which is a geodesic dome, symbolizes the island and the biosphere, and a visitor will be placed as a temporary dweller in it.