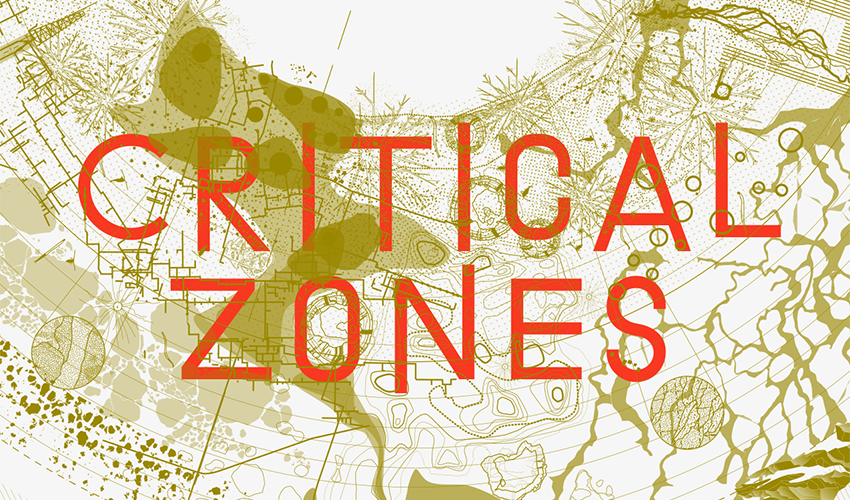 Over a period of several months, ZKM is hosting the exhibition Critical Zones: Observatories for Earthly Politics. curated by Bruno Latour and Peter Weibel with Martin Guinard and Bettina Korintenberg the exhibition invites the audience to deal with the CRITICAL situation of the Earth in various ways and to explore new modes of coexistence between all forms of life.

The term »Critical Zone« is taken from the geo-sciences and describes the biochemical, fragile layer of the earth, the surface on which life is created. By Bruno Latour, the term is extended to a critical, participatory relationship to our living world, whose threatened state has reached an unprecedented scale in the Earth’s now man-made history. Latour has described this worldwide situation, which affects all living beings on the planet, as a »new climate regime«.

It is not only limited to ecological crises but touches on questions of politics and cultural history as well as ethical and epistemological changes of perspective.

And increasingly, scientists, artists, activists, politicians, and citizens are realizing that society is not centred solely on humanity, but it has to become EARTHLY again if it wishes to land without crashing. The modern project has been in flight, unconcerned by planetary limits. Suddenly, there is a general movement toward the soil and new attention to the ways people might inhabit it. POLITICS is no longer about humans making decisions on their own and for themselves only, but has become an immensely more complex undertaking. New forms of citizenship and new types of attention and care for life forms are required to generate a common ground.

Conceived as a scale model to simulate the spatial novelty of this new land as well as the diversity of relations between the life forms inhabiting it, the exhibition will serve as an OBSERVATORY OF CRITICAL ZONES, those thin layers at the surface of the earth generated over eons of time by various life forms.

The exhibition is accompanied by a smartly-design website dedicated entirely to this project, lots of online resources and insightful text and projects, virtual guided tours and several talks providing a very compelling framework for this new current of research.

The exhibition runs until 28th February 2021.