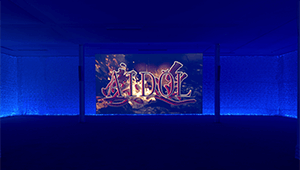 Artist Lawrence Lek creates speculative architectural scenarios using gaming software, video, installation and performance. With a background in architecture he uses speculative design to create worlds, ‘I’m more interested in creating worlds rather than focusing on any particular discipline. Sometimes the world is completely synthetic; other times it’s based on a twisted version of a real place. But the world has to be experienced in an incomplete way – you can only simulate, not reproduce, reality,’ Lek told CLOT Magazine.

AIDOL is his new feature-length film (or the simulated world?). AIDOL is a computer-generated fantasy that revolves around the long and complex struggle between humanity and Artificial Intelligence and defies the concept of genre, engendering a fictional space. In it, Lek tells the story of a fading superstar, Diva, who enlists an aspiring AI songwriter to mount a comeback performance at the 2065 eSports Olympic finale. As in previous works Lek’s imaginary world lies in the dichotomy of the real world versus the simulated, the shimmering utopia versus the automated dystopia, the ‘human’ versus the  ‘AI’, ‘I want to create work that combines memory and fantasy. Since each video presents an alternate history of a place, it’s a form of liberation from the present, from the gradual and relentless mechanisation of our environment. I hope that after encountering the virtual world, the real world reappears as just one in an ocean of possible futures. Obvious ways forward are to build worlds in VR and as real architectural projects’, Lek said in an interview with CLOT Magazine.

AIDOL is produced using 3D rendering, gaming software, science fiction, music videos, and motion capture technology and is the sequel to Lek’s 2017 film Geomancer. As in previous Lek’s works, Farsight Corporation is a controlling force in this universe and aspects from of modern South-East Asia are allegorized into a futuristic otherworld. AIDOL is Lek first exhibition at Sadie Coles HQ in London from April 18 to May 19, 2019.