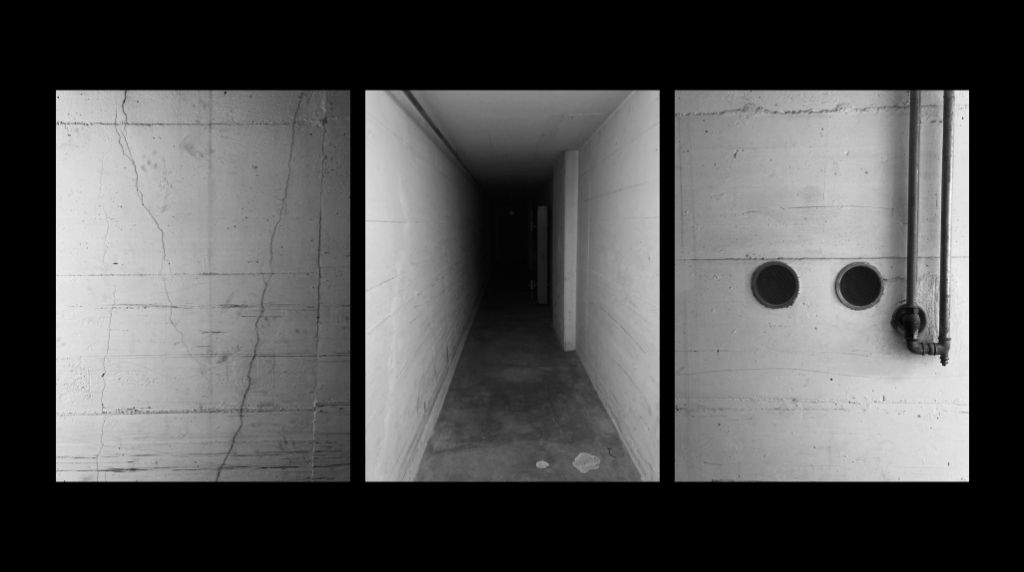 What Remains When Nothing is Left is an experimental composition based on a reconstruction of a micro poem written by artist and poet Lukasz Polowczyk. It was recorded live at the Tolcha Studios in Berlin back in 2018. What Remains When Nothing is Left was intended as a tribute to the Zen tradition, which both artists hold dear. The emphasis was placed on the cultivation of mindfulness and the notion that access to reality is only granted by actively interfacing with the ever-unfolding present.

In the wake of premiering the video, CLOT Magazine talked to Ramón Oliveras and Lukasz Polowczyk about the intellectual process and the performance.

Ramón Oliveras: This piece is a guided exercise in deep listening and, simultaneously, a meditation on words, sounds, and the materiality of words. I wanted to direct the listener’s attention away from the attack to the decaying/devolving part of a sound, something that you’re not aware of in real life because it happens in a split second—unless you’re having a conversation in a big church.

On a more poetic level, it’s about shifting away from the words, their meaning and the flow of time towards the minuscule details that you often miss and towards a mindful, meditative state. With the freeze pedal, I could extend a split second of speech into a static drone sound, magnifying the artefact to an unnatural but aesthetically fascinating scale.

The piece starts off by using all of the six words of the poem, but as it unfolds, the algorithm starts to omit particular words until we are left only with a two-and-a-half-minute loop of the word/drone “remains.” So, in the beginning, you hear the difference between the individual actions/words, but over time you start to hear how the actual “frozen” takes differ from each other and how they interact. Thus, you are confronted with the same words but the different drone sounds they produce. This happens over and over again, until…. nothing remains.

Lukasz Polowczyk: When Ramón reached out to me about us working together on this piece, I was finishing up a micro-poetry collection called Chroma Key (due out in the next couple of months). The poems in this collection are extremely minimal, sometimes only a couple of words long. They’re like polaroids that document everyday life, but as if the pictures were shot to strip each image of context and use the white frame as a part of the composition.

The crop is very tight, and what you end up with are these high-level abstractions. I realised while working on these pieces that this type of approach and framing leaves more space for the reader. Everyone can project themselves and their own experiences into the work. This form also offsets the author’s presence in the work and the author-centric point of view because the narrator is hard to identify in most poems.

At the time of writing, I was really inspired by John Cage’s work and how he managed to transpose a Zen modality into his work. I figured that if he can do this with musical compositions, I can do it with poetry. I’m not sure if I achieved this fully, but at least that was the aim.

The piece that Ramón selected for the composition reads: what remains when nothing is left. It’s as close to a koan as I could get at the time. I love how you’re literally left with nothing as a reader and forced to contemplate what that “nothing” is. Or isn’t. I love how Ramón’s interpretation of the poem took this notion of working with and around the “void” by deconstructing the poem: first, at a level of syntax, then by divorcing sound from meaning, and then slowly chipping away at the words until you arrived at “nothing.”

Ramón Oliveras: When Lukasz showed me the poem, I knew immediately that this was the perfect one for the piece. This composition was inspired by a Japanese approach to aesthetics called Wabi-Sabi, the beauty of imperfect, impermanent, and incomplete things. Wabi-Sabi focuses on moments that are either evolving from or devolving into nothingness. So how could I have asked for anything more than these six words?

Lukasz Polowczyk: The recording session was like an exercise in mindfulness. We both had to be hyper-aware and at the moment to be able to hit the cues on time. I had to recite the words “on-cue.” Ramón had to freeze a part of each word while I recited it. The time increments that we dealt with were infinitesimal.

In this hyper-aware state, our time perception got utterly warped. When we finished recording, I felt like I came back from some other place. When I listen back to the recording, it still takes me to that meditative space. I hope that it also has this transportive quality for other listeners. If so, mission accomplished!

Ramón Oliveras: Yes, it was a fascinating experience. I was present and couldn’t think of anything else; I was just focused on the words. In my experience, it’s not a given that minimal music produces a meditative state not only in the listener but also in the performer! I enjoyed the recording of this one very much.

Łukasz Polowczyk: From the very beginning, we wanted to present this work in the form of an installation. Originally, we wanted to do something with video, something immersive. Needless to say, the pandemic derailed our plans in so many different ways. We decided to let the composition play once out of a single speaker placed in the hallway of a bunker located underneath Zürich.

It was a symbolic gesture to honour our efforts and to anchor the project in historical time. No one besides Ramón was there to hear it. I think that this particular framing of the composition added another layer to it. It shifted the emphasis from Zen as the practice of mindfulness to Zen as the study of impermanence. If anything, for me, this pandemic was like dealing with a rigorous Zen teacher. There is no yesterday, tomorrow doesn’t exist, and all you can do is deal with the mighty now!