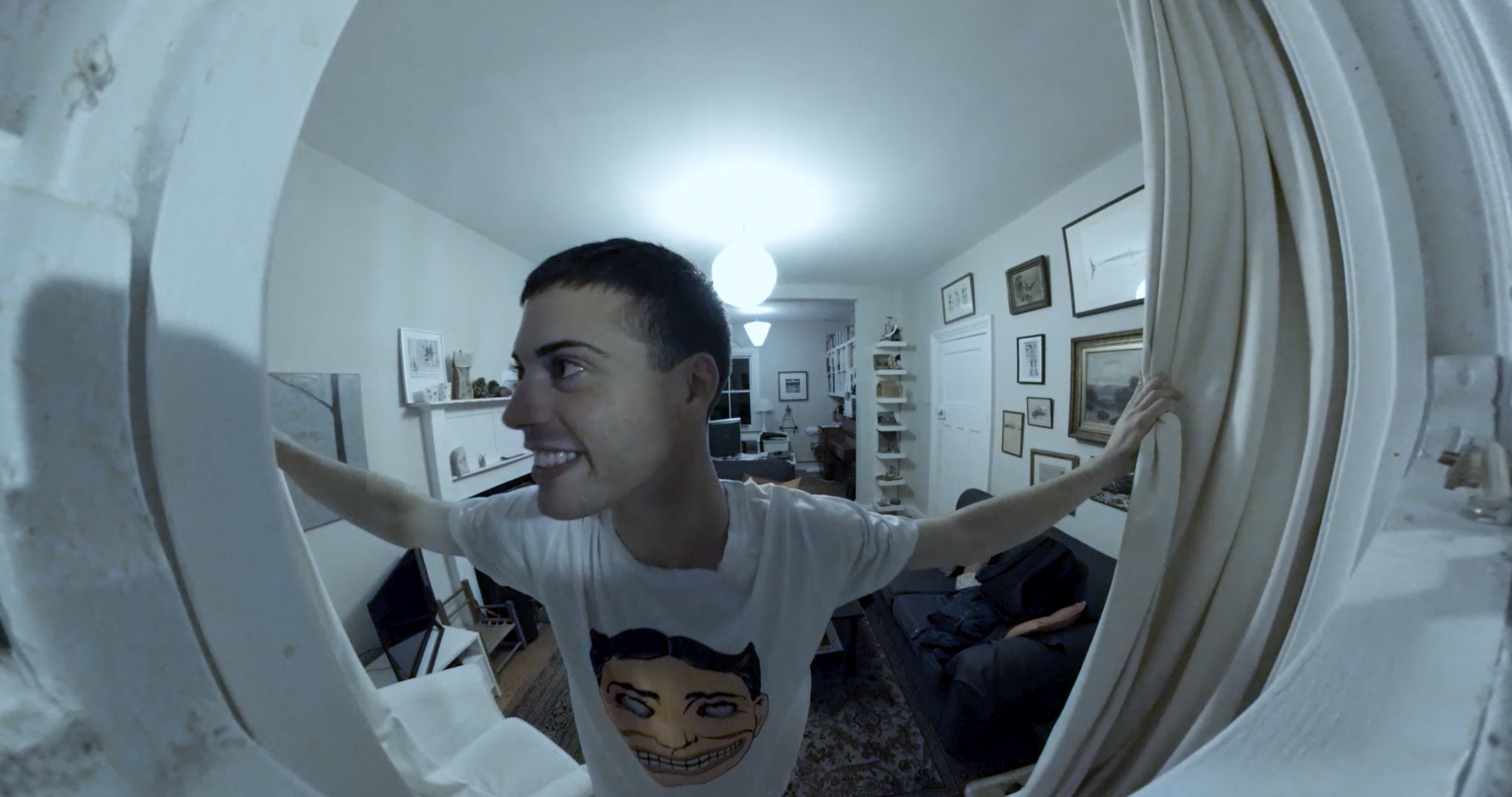 The multiple scenes and vignettes in the film are connected through the traversal of a red hooded avatar, who progresses across various landscapes, observing the environmental and moral decay of the world of Erangal.

Brennan’s practice takes on non-linear narratives, building experimental films which have a fractured formal quality and often deal with a deep and profound interest for exploration both real and virtual. Straddling the line between multiple forms and genres, some features clearly exemplified in Erangal. His work also revolves around ideas of virtual world-building and videogame logic as a world-building device.

Through the transposition of actions seen in video games to physical bodies, Erangal grapples with the idea of virtual violence as a form of expression and identity whilst scrutinising the predominantly male ‘gamer-bro’ archetype synonymous with these online cultures.

The collaboration between Kevin and Lugh took place as a continuous feedback loop. While Kevin envisioned and created new scenes Lugh produced new music pieces, each informing the other — the soundtrack and the film were crafted as two separate entities in constant cross-pollination.

Lugh’s ever-present score invests and heightens the film’s emotional tone, moving between a sense of foreboding and suspense in ‘Taut’ and ‘Forest Lure’ eventually reaching a frenetic crescendo in ‘Lost Boys’ and ‘Moan Jiro’.

As part of the conception of the Erangal OST, Lugh reworked ‘Moan Jiro’ – a track title that makes us think whether it is an anagram of the mane of renowned Catalan painter Joan miró – from his previous release Helico, which featured Olan Monk — C.A.N.V.A.S. co-founder alongside Lugh — whose instrumental intervention provides the brawny, bruising anthem for the brutal and grimey antics of the hyper-masculine, lakeside dwelling lost boys of Erangal. Marie Requa Gailey, who also features on Lugh’s previous release Re Munus, contributes eerie multi-layered vocals for ‘Forest Lure’, characteristic of the omnipresent tension and unease felt throughout much of the film.

The Erangal OST, released by C.A.N.V.A.S., builds stylistically upon Lugh’s previous release on the label while introducing air for the creation of a deeply contemplative environment and to make space for an aesthetic alliance with  Kevin Brennan’s approach.

Lugh’s composition process amounted to the creation of an album — separate tracks, the combination of which became the sonic embodiment of Erangal. Those compositions now live within the film, interwoven into its various scenes and worlds, and simultaneously as an original soundtrack album with graphic and product design by Zuzana Pabisova, offering an auditory depiction of Erangal and of Kevin and Lugh’s joint effort and collaborative process.