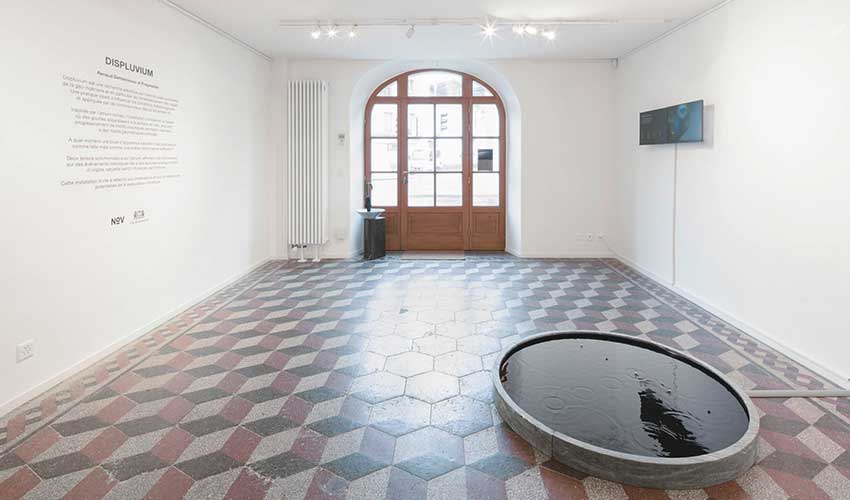 Displuvium is an artistic research conceptualised and created by Fragmentin, an art practice based in Lausanne, in close collaboration with Swiss designer Renaud Defrancesco. Fragmentin is composed by Laura Perrenoud, Marc Dubois, and David Colombini, 3 artists and friends who met and graduated from ECAL (École Cantonale d’art de Lausanne). Working at the crossover of art and engineering, David Colombini on behalf of Fragmentin, tell us over Email that their work is highly influenced by the ideas and writings of Alain Damasio, Eric Sadin, and James Bridle. Their aim is ‘to question the impact of the digital on everyday life and the tension between nature and technology. We investigate how those technologies and algorithms allow for more control and opacity. We often reintroduce randomness and serendipity as an antidote for control and optimisation. We recently explored topics linked to climate change, hybrid nature, weather modifications.’

Displuvium is an installation developed with Designer Renaud Defrancesco that takes the form of a pool filled with water. It examines the human desire to control our natural environment, particularly meteorological phenomena. To go further with their research about nature, technology and control, Fragmentin decided to create a piece about weather modifications and more especially the controversial practice known as “cloud seeding”. ‘Since the late 1940s, several entities – governmental and otherwise – have chemically intervened on clouds to influence rainfall. It can prevent hail from ruining crops, relieve periods of severe drought, intensify showers over strategic areas in the context of military conflicts and even prevent rain from falling on the proverbial parade.’ Colombini continues. Their position as artists is not to decide whether is right or wrong to use such technology but rather to create an opportunity to reflect on this topic.

The inspiration for the shape of the installation came from the role of fountains and water basins throughout history, especially in Ancient Rome, where wealthy households enclosed an atrium displuvium – a semi-covered central room, typically surrounded by porticoes -. While the intellectual process lies at the core of the rhythm of the rain. ‘Is there a special algorithm that makes rain look like rain. If we recreate artificial rain, will it still look like rain to the visitors? Is the visitor able to perceive the gradual transformation of the rain’s rhythms? When does seemingly natural rainfall reveal itself as a controlled and artificially created downpour?,’ they reflect. Their installations are conceived as spaces for discussions and they welcome the audience to give their opinions. One of their main aims was to make the visitors aware of these practices and critically reflect on cloud seeding practices and the possible impact of future technologies on natural phenomena.

Displuvium ‘aims to demonstrate the link between humans and nature. It illustrates the ease with which it is now possible to reproduce natural phenomena, thanks to technological breakthroughs.’ Displuvium is not an interactive piece but rather a meditative and contemplative one. Every two minutes, rain patterns at the surface of the atrium and narrative sequences on the screens are slowly and simultaneously changing. They have created a loop of around twenty minutes of twelve historical events related to rainfall episodes; sometimes of natural origin, sometimes tampered by humans.

When looking at the future, after dismounting the installation Artificial Arcadia: measured and adjustable(?) landscapes elaborated in collaboration with Kosmos architects for the 14th edition of the Prague Quadrennial of Performance Design and Space, their plans a short term are to find gallery, festival or museums where  to exhibit Displuvium; while on a longer run, we are working on a new VR piece for an Environmental & Land Art Biennale happening in 2020 in the Swiss mountains.

‘Tomás Sánchez and his omen to the future’ by Silvia Iacovcich

STUDIO FORMAFANTASMA, the importance of environmental awareness translated into design 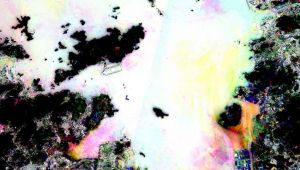