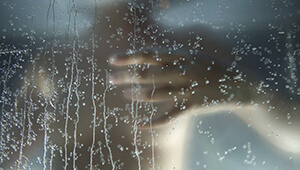 Today we are presenting the video documentation of CRYSTAL, a project by the art-science laboratory SAVE lab, created for the exhibition 12 Signs of the Living.

The project touches upon the topic of spiritual challenge based on the ideas of Marina Abramovic, and it’s aimed at the direct communication between two objects: a human body and a chemical substance – menthol.

The video documents a performance that lasts between 60 and 90 minutes. The performer stands inside a glass tank while the tank is slowly filled with menthol steams, which appear from this substance’s gas (foggy) phase while it finds themself in this epicentre, and the substance precipitates on his body, gradually building up polycrystals and dendrites. The performer needs to learn to exist in this environment. The product of this project is living evidence of the interaction between the human body and matter as it changes from the gas phase into the crystal phase and then finally evaporates on the human body.

Julia Boravaya, the artist of the project, and the video director Daria Shishkina discussed with us some details of the making of the film. First, the video’s main idea was to portray a sense of minimalism. It was important for them to show the chemical process of crystallization and important too not to overdo it with complex concepts. The black background helped to emphasize the beauty of the crystallization. Music as well plays an important role, but not the primary one. It was important for us that the focus was the chemical process of crystal growth and the drama of this action. The music created the atmosphere, and the music created the depth of this work, they say


*The video below is age-restricted for nudity reasons, and viewers need youtube logging for visualisation.


Borovaya continues by explaining that the first element is the visual part and drama with the heroines who are experiencing the crystallization of the body and consciousness. The second is the musical part, with the third being a beautiful light, almost recreating a Rembrand-like aesthetics. The combination of these three volumes creates the desired effect on the viewer.

The main challenge for the production of the video was the human factor. Their professional performer was unable to attend the shoot. Therefore, not fully prepared models had to take part, with some of them fainting as they did not expect that the crystallization of the body would be difficult physically and mentally. If one inhales menthol vapours, this leads to a decrease in blood pressure, and fainting follows; you need the experience of being in menthol vapour so that the body adapts. Filming took place in conditions of low temperature (+17 degrees) and low humidity, conditions important for crystal growth. This project is a reflection of how nature is unpredictable, the natural phenomenon of crystallization depends on a large number of facts, and one can never be fully prepared in advance.

After the performance, Borovaya continues telling us that the substance stays on the performer’s body ‘as an invisible, thin but perceivable layer that makes them feel its action under the clothes as the environment changes and that  It takes about three hours for the substance to fully evaporate. A completely outer bodily experience beyond what the mind can imagine. 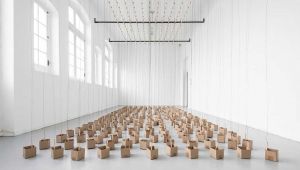