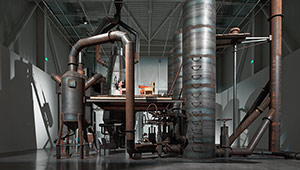 For his largest-scale exhibition in the United States, The CryptoFuturist and The New Tribal Labyrinth, AVL draws from two bodies of work that give the exhibition its name. They transform Pioneer Works into an immersive installation of sculptures and industrial machines. Central to the New Tribal Labyrinth series is Blast Furnace (2013), an imposing structure referencing Industrial Revolution-era furnaces traditionally used to produce steel. The sculpture also contains domestic elements such as a kitchen, toilet, and sleeping quarters. More info.

Today, when technology seems utterly smooth and weightless—composed of invisible waves, wireless signals, abstract codes—New Order explores the ways in which these systems are still stubbornly tied to the physical world. Drawn entirely from MoMA’s collection, the works included highlight the uneasy coexistence of intelligent networks and dumb stuff, high tech and raw material, the fabricated and the readymade. Technology, they suggest, is always mired in matter, friction, and failure. More info.

What does it mean to design and control a living machine? What are the practical, artistic and ethical implications of doing so?
In this workshop participants are invited to think about issues concerning the engineering and production of living machines and then attempt to design and grow crude prototypes made of twitching human heart muscle cells grown over scaffolds made of silk. More info.

As part of «Mutations/Créations 3» and presented by IRCAM Scanner presents the world premiere of an audio-visual performance based around his Mass Observation project. Originally recorded in 1984 at Thirst in Croydon London, as a live session. Dehumanised communications, beatless, radio signals were drawn in live to tape, and accompanied by dial tone pulses and abstract textures, Mass Observation is a highly suggestive picture of a particular place in a city at a very specific time.  More info.

The international festival for adventurous music returns again on it’s ninth edition of Rewire festival upholds our tradition of presenting adventurous music; highlighting multidisciplinary crossovers and forward-thinking artists who push boundaries and rewire the idea of what music and performance can be today. Musicians who embrace innovation, explore new artistic directions and collaborations, seek out contemporary forms of performative expression, use emerging technologies such as AI, or invent their own instrument. More info.

London events company Krankbrother is launching a new, multi-venue festival that will focus on ambient, drone, leftfield electronics and techno. The aim of the festival is to combine experimental electronic music, Brutalist architecture and innovative lighting installations for an arresting new party experience. More info.

Ocean Space, a new center on the oceans and collaborative platform for change, will launch its first phase this March. Initiated by TBA21–Academy, this new embassy for the oceans will catalyze transdisciplinary research and foster collective action, encouraging audiences to radically reimagine how we see and treat the defining feature of our blue planet.
Inaugural program features large-scale installation by artist Joan Jonas commissioned by TBA21–Academy.  More info.

William Basinski –  On Time Out of Time, Temporary Residency 2019 (info)