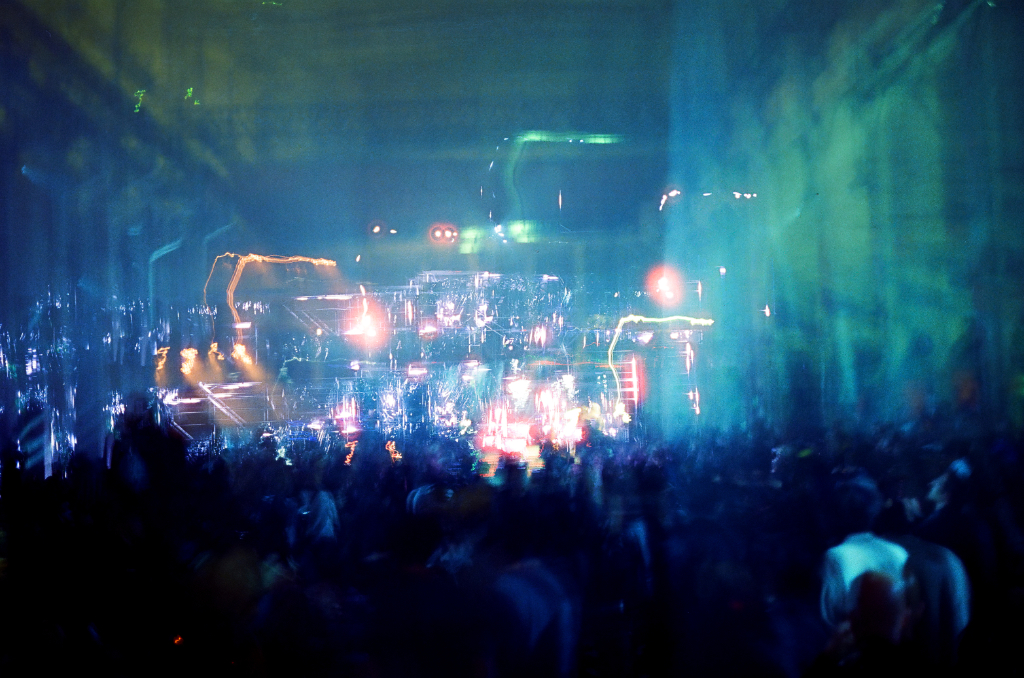 While on the way to Berlin, time-bending, going in and outside of the grid, we [the writers] started to question historicity through the legacy of Iannis Xenakis’s prolific practice and the main theme of this year’s special Berlin Atonal X100. Can time be changed? One hundred years after the celebrated composer’s birth, we physically face memories from ten years back. Entirely enchanted, longing for attunement, but ruthlessly left in the space in between, even though we had not arrived on site on time, we embodied the event fully from the start, way before it was advertised anyway. Then, last minute and just on time, repeatedly encountering a different rhythm of life than what we knew, in the multiplicity of directions scattered through sonic signals around the eight-channel speakers, we were welcomed by the curatorial team at Kraftwerk.

And the question was: is there a formula to transcript the embodiment of a human experience? It is easy to think so as Xenakis managed to create art by manipulating technology and mathematics. However, even if art appears to be submitted to subjective interpretations, the narrative of it is often told from a patriarchal perspective. Out of sync in this hierarchical society, we ended up for the first day in Misfit, a misplaced bar in the middle of the city, lost in the mesh of moments stochastically sourced in different temporalities. But our Misfits’ bones are there to shake all those assumptions of how we should receive art. Art is not about intellectualisation but about the present moment of how the body reacts to a performance regarding its own corporal archives. It is where and when phenomenology crosses with our somatheque self (this term coined by P. B. Preciado implies that the body is a political and cultural record). And here is the presumptuous intelligentsia rooted in the elitist background! Enough of this self-sufficiency, and let’s speak the truth of our living Atonal.

There is something absolutely relieving about releasing the crushing pressure of an aggressive Powell’s ƒolder and taking the Gamble that the journey could regain an expandable joy through our senses. Stepping aside is all it sometimes takes—stepping into an interstice that wasn’t supposed to be there in the first place. And in this different spatiality, however, anchored in the same temporality, the whole Atonal experience finally came together from a misfit place in the capital’s centre by going through the sensorial arborescence guided by Xenakis’s work to a final Tresor place. The outsiders brought us on an exploration out of the expected paths designed by the festival.

Having entered another fold of time that did not belong to the same realm, blinded by our bodies’ invisibility, we found each other in the space of the old power station saturated with striking strobe lights. One of Xenakis’ pieces was being diffused by artist Sergio Luque. Their praised performance of Persepolis (971) gave space to La Légende d’Eer (1997) this time. The delayed dance of light and sound, or something that others might call a spectacular show, was an immensely immersive experience of embodying sound, immediately influencing the porous prone mind. The piece’s title refers to the final part of Plato’s Republic, where the soldier Er returns from death, struggling to distinguish images of the afterlife from life itself. Delirious and dizzy, we experienced abyssal time, overwhelmed by the gaze coming from outside rather than from within.

How can one simultaneously tune into the inner ear while bombarded by many external stimuli? Hoping for non-hierarchical new ways of being-with-others, the curators behind this happening use the figure of Iannis Xenakis to inspire contemporary art search for ‘new architectures of music and new systems of thought’. Conscious of collectively composed affective resonance, we found the safe space constituted on selfless sharing in the act of listening.

CLOT Magazine · Berlin Atonal’s X(Xenakis)100 – Interview with Studio LABOUR, coming to be for oneself

And with the live 8-speaker electro-acoustic diffusions arranged by Haswell & Hecker, the journey continued, taking us on a cycle impregnated by earth’s elements. Their UPIC Diffusion session #23 created a breach within Kraftwerk, where the electricity of the vibrant sounds resonated with the air, scattering ashes above us from the silver fire of the scenography. The volatile particles of our experience then landed on an ocean named Pan Daijing. Under her direction, the ensemble of opera singers turned the environment around us into a floating Aquarius space. The echoing of their voices shaped a delicate gathering where our bodies experienced the liquidity of music accompanied by undulating lights projected on the walls. And from this musical sea, Dreamcrusher managed to bring us back to the ground. The Nihilist Queer Revolt Musik sense of the artist travelled from the floor to our inner bones, a vibrating sound that allowed us to find our reborn self firmly rooted in earth. A powerful performance where the depth of the noises, its waves and its messages empowered the act of listening and understanding and turned it into a transformative experience.

A completed cycle of ashes through fine air, diluted water and grounded vibrations, who opened the next day on a novel act: a partition of theatricality, painting and dance. And like the whispers, before the curtain goes up in an auditorium, the percussion of the Pléïades reverberated with the audience’s voices, creating a captivating shared ballet—a prelude for the incoming triptyque where Sergio Luque performed the first part. The piece GENDY3, created by Iannis Xenakis in 1991, was designed due to its synthesisation of sonic waveforms based on stochastic functions, a proper theatrical architecture. Kraftwerk once again was reshaped, and the performance offered a new experience where our whole body was part of this rhapsody recreation. We were integrated elements of the play when suddenly, the introduction of the percussive narrative of Valentina Magaletti painted a singular canvas. On the movements of drums and percussions, the composer recentred the individual for a phenomenological approach to the music, accompanied by a spectacle of lively pictures behind her. Colours changed on the rhythm of experimental waves, and undiscovered territories appeared. The beauty of the music and the moving painting merging shifted our position to transport us within the pictorial material of Valentina Magaletti.

An all-senses embodiment extended by the Ride of Discord of Puce Mary. On the other dark end of the room, in an intimate setting seized by speakers stacked up, they premiered a collaborative piece, sharing the small stage with cellist Lucy Railton and PAN’s Bill Kouligas, who presented their original pieces, exploring microtonal music, glissando and granular synthesis. Oscillating between harmony and chaos, the performance played with the elasticity of the waves up to the floor. Enveloping the listener into a sonorous veil coming from beneath; the dark soil of unearthly smell; the warmest darkness of all; the other-worldly womb. The performance was purely a portal inviting into a space of surrender, of letting go of control, where the dichotomy of the material world turns into a poetic play. Rippling through human bodies, shadows emerging from the instruments started to dance on the concrete. A mesmerising accident that magnified the poetical and emotional composition and summed up our Atonal experience: the beauty of art lies in the delicate fortuity out of the scope and the embodiment of our own self during those fleeting moments. Misfits, Kraftwerk, Tresor, never mind the venue, the journey of X100 was an organic feeling diluted in time and space, an empowering tribute to Iannis Xenakis, who will lie with us beyond the doors of the festival and fabric a revived memory for our evolving somatheque.