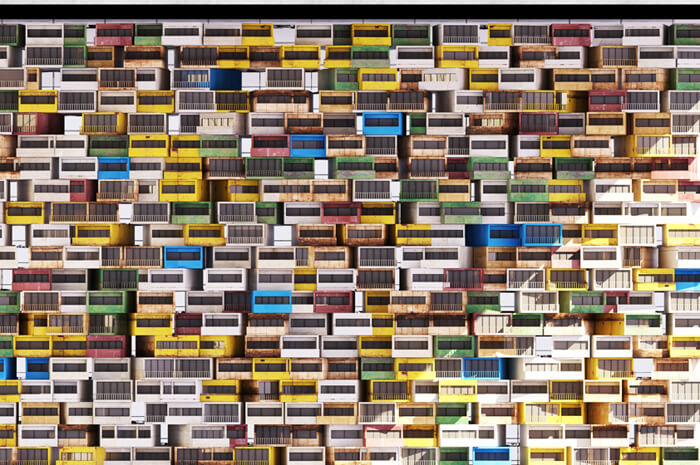 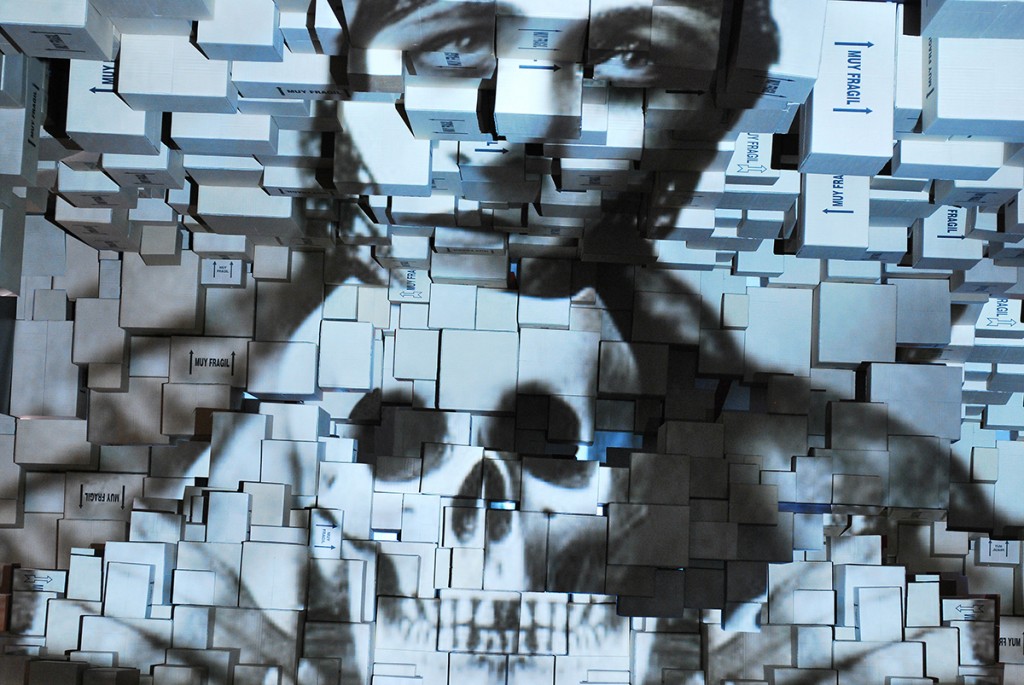 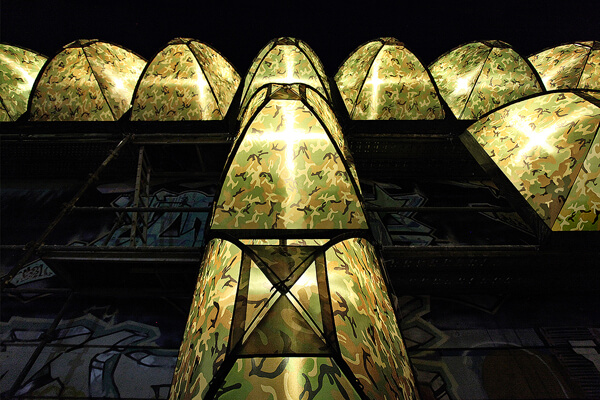 The central axes of his work, the reappropriation of materials and the non-destruction of buildings, are in harmony with ecology and sustainability. Malka applies the readymades’ principles of the Dadá School to architecture adding value to the recycled materials and creating a new architectural scenario. The Parasite Architecture, ‘an alternative to solid and permanent architecture (…). It comes on the existing site with no destruction, and hangs on it’s porosity.’

I discovered Malka’s work two years ago in Barcelona where I enjoyed Boombox at Arts_Santa_Mónica. Boombox is an installation built with humble materials, such as cardboard, and noble materials, such as stones that, in Stéphane’s words ‘proposes a rediscovery of the XXI century megalopolis through a superposition of architectures.’

His last project — A-KAMP47 — is a safe and warm shelter for the homeless of Marseille, his hometown. My favourite one is Auto-Defense, though. Developed in 2009, it is a provocative act of guerrilla architecture that consists of a complex of modules which are attached to an existing building that helps rebuild the city of the future “It’ll be a society of architectural accumulation. (…) future will have to deal with that and overpopulation, architecture will most probably deal with survival issues.” 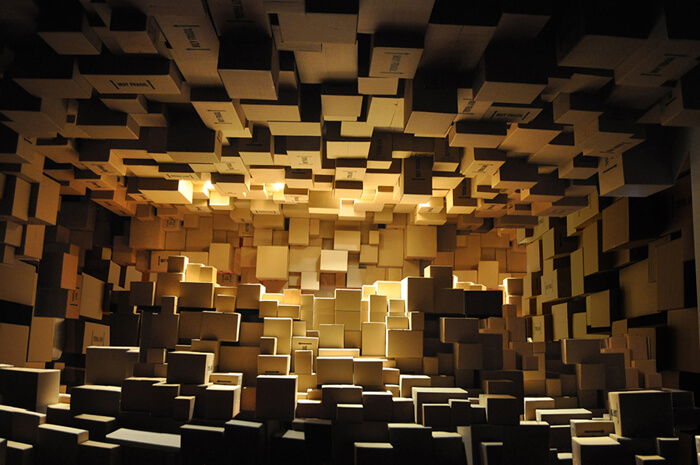 I used to live in Barcelona and in that city I had the chance to enjoy your installation BoomBox at Arts_Santa_Mónica in July 2011. How did you come up with the idea behind the installation?

Boombox is an in situ contextual installation.  An explosion of the Santa Monica Art Center, that transforms the existing architecture in order to change the perception and experience of the site. The approach proposes a rediscovery of the 21st Century megalopolis through a superposition of architectures. The city builds upon itself, building on the land and the existing built heritage, within its porosities and on its appendages.

The basic module of this installation is the cardboard box. Appropriated from its original use, it nevertheless retains the symbol of an ordinary container for the nomad. This urban scenography plays on the dichotomy of elements; it’s an eulogy to cardboard, a cheap material symbolizing nomadism, contrasted against stone, a noble material representing longevity in all its static weight.

Although separate entities, there is nevertheless an exchange between two bodies, a cultural and social fusion between the academic and the contemporary, at the crossroads between a work of art and a work of architecture. The invasion of a humble material at Arts_Santa_Mónica  carries with it the debate about art in public spaces within the city, in an open, democratic and accessible form.

How do you feed your creativity?

I consider myself as a sampling machine; everything I see gets in the loop. Mostly my works react with social events; strikes, riots or leftovers.

Have you found new creative and innovative ideas where there was once failure?

Not yet, sometimes it works better than other times.

If you had the choice of being born in any period throughout history, which period would you choose?

I’m definitely a child of the century, I feel my work is an echo of our contemporary society.

How do you imagine the city of the future?

It’ll be a society of architectural accumulation. Realness brought 9/11 and the economic crisis definitely killed the «2001 Space Odyssey» future, where everything is aerial and softly designed.

The near future will have to deal with that an overpopulation. Architecture will most probably deal with survival issues.

It’s all about strategic positions to insert architecture into City’s voids and gaps. You can call it Architectural Kamasutra or Sex on the City… Chapters are: On top / Underneath / In Front / In between (as the cubes in my logo )

Parasite Architecture is an alternative to solid and permanent architecture as we know it. It comes on the existing site with no destruction, and hangs on its porosity. Different strategies should bring different materials, lighter and easier to build with, like manufactured objects.

Easy to get, easy to build.

As LLCool J once said; «Can’t Live without my Radio»

News and Music keep me awake.

One for the road… Last November 19th, the 5 Pointz in Queens was painted white. This seems to indicate that the destruction of the public art space is imminent. What do you think as a street artist and as an architect?

I’ve always appreciated graffiti for its vandal side, not because «of the beauty of the colors.» In the late 80s, when I’ve begun, graffiti was so unpopular that we were treated as criminals. Now times have changed and the trends want to have the ephemeral to be permanent. I thought that white painting on top of all that graffiti is a total act of vandalism: the roots of graffiti itself! In writers’ language it’s called a «TOY» that stands for Tag Over You. Graffiti, as Parasite Architecture, is not a permanent stuff, so that’s a basic condition to have it down.

It’s always been part of the game. Then painters do what they do best, again and again. The destruction of the public space generates neglected areas, and those spots are the graffiti painters’s favourite, it’s incremental. You cannot destroy a public art space because there is no specific place for art in the city when it comes to graffiti; it can be everywhere.