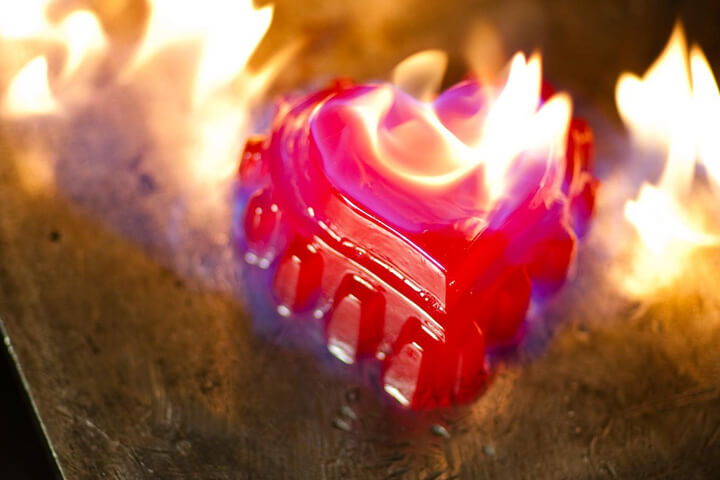 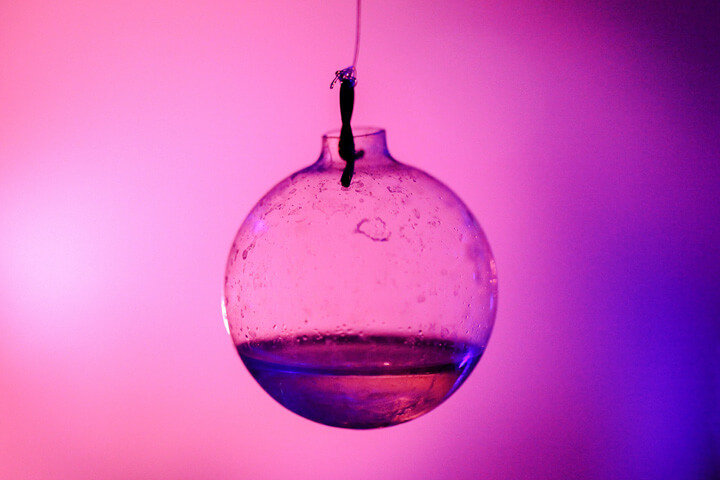 (The Chamber of Whishes. Photo credit: Tommo for Bompas & Parr)

Sam Bompas and Harry Parr, are two of a kind. They live in a world of wobbly jelly buildings and towers, where flowers change colours, cocktails are inhaled and everything possible is edible. Their designs go beyond speculation to turn into reality our most sumptuous dreams and they exude science and technology with a cheeky opulence that can’t leave one indifferent.

The two childhood friends founded Bompas & Parr in 2007 as what’s been called a  “jellymonger” and they achieved the most impossible of the designs with their creations, for which they have collaborated with renowned architects like Lord Foster and Sir Nicholas Grimshaw among many others. More recently, their endeavours have taken them into experimental food craft and immersive “experiences”. Their innovative design is developed in close collaborations with scientists. They have used enzymes, bioluminescent algae, temperature sensitive dyes and even based creations on the work of experimental psychologist Charles Spence, who formulated the theory that taste can be altered through musical pitch.

Their latest creation, Perrier-Joust Fleur des Rêves, designed especially for Valentine’s Day*, takes inspiration from The Private Memoirs and Confessions of a Justified Sinner, one of the creators’ favourite book, in which a passage reads that natural flowers should be created to resemble artificial flowers. For this project they designed the “first colour changing flowers” using two different types of thermochromic inks, substances that change their colour upon temperature fluctuations: hold the flower in your hand or breath on them and you’ll see a wonderful chromic trick.

Delving into the work of Bompas & Parr feels like taking a trip down the rabbit hole into a sort of lavish, decadent and fastous Alice in Wonderland. Exquisite designs and compositions with superb and flamboyant colour palettes and inventions that trigger our senses in all imaginable way, making science and technology a treat to our mouths.

(*) Tickets to the workshop available at info@basementldn.com

Your work blends food science, design, (bio)technology … When and how did the fascination with them come about?

Right from the very start of our practice, when we used architectural and design techniques such as CAD design and 3D printing to help make moulds for jellies we’ve melded history and ritual and future technology. Now we are more pro-active in our approach to cross-fertilisation and are currently collaborating with everyone from microbiologists and laser physicists to set designers and wild game hunters.

What are the biggest challenges you face in the development of your projects?

We really believe that everyone can be creative. Think of the countless conversations happening in restaurants, pubs and parks where people fantasise about waterfalls of fine alcoholic cocktails or trips to the far jungles to discover previously untasted, ultra-exotic fruit.

The difference is at Bompas & Parr we are geeky enough to spend the next six months working through the production and the H&S implications! At the moment our biggest challenge is the constant race against time to come up with really innovative concepts that melt people’s brains and realise them before anyone else does. Most ideas realistically occur in several places around the planet all at once. It is just a matter of being the first person to get it out there.

Right now we are working on the next generations of flowers for Valentine’s day which melds technical dyes and historic floriography. We’ve worked out how to make colour-changing blossoms by impregnating blossoms thermochromatic dyes – they change colour when you set them on fire or even breath on them with your hot breath! The flowers will then be launched for an installation, Perrier-Jouët Fleurs des Rêves and you can pick them up (and a glass of Belle Epoque champagne!) at an ultra-exotic flower shop in Basement of The London EDITION*.

We are also hosting workshops where you can make your own thermochromatic flowers for a friend or lover. Pop down! Have a look at the images. It’s all done in-camera.

We are most interested in working on large-scale projects with a global significance. So when we hosted the NYE fireworks for London (you could taste the explosions and they were fruity) there was a live audience of a quarter of a million people. For the future we are interested in using contemporary technology to give ever greater audiences joyous shared experiences. The aim is to create those moments like Princess Diana’s death, 9/11 and the icelandic volcano eruption that stopped all air travel that everyone remembers – but in a way that is wonderful and awe inspiring!

Over the next year we’ll be working with creative genetic manipulation in order to generate previously inexperiencable flavours. One cherished project is to use the gene map of Mammoth DNA in combination with in-vitro meat culture techniques to grow lab meats; the steaks that time forgot. We area also looking at large scale weather manipulation, micro-organisms and mazes, subterranean banquets and the permanent establishment of the British Museum of Food. And we are still not done with jelly…the quivering desert we started with.

If you had the choice of being born in any period throughout history, which period would you chose?

Visiting Medieval Times aged six was key for my development as a designer. So maybe going back to the Dark Ages would be particularly rewarding. At Medieval Times the ‘pastry of the castle’ and chicken feast may have been ropey but it was served while two fully armoured men smash each-other with maces and flails right in front of you.

With the athletic jousting, sorcery and waitresses costumed as wenches its hard not to finish the meal on a high. It was an important lesson in dining as sensory assault. By creating spectacle the choreographers made the meal sublime.

Living in London the city of pleasure. There are so many excellent things to do you could happily spend all your time consuming rather than creating. You have to learn how to balance out the intensity, pop down to Sainsbury’s for your groceries and get your head down to some work.

Gaffer tape is an essential in every conceivable scenario, including culinary ones, useful for patching bin-bags before the bin-juice leaks everywhere, fixing important tools or holding installations together. Also books. Our studio library includes everything from Slim While you Sleep to technical books on cymatics, two copies of The Victorian Cemetery, a shelf dedicated to world fairs and expos, Dali’s cookbook and my newest acquisition Ruin Lust.