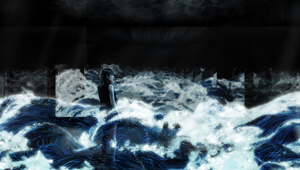 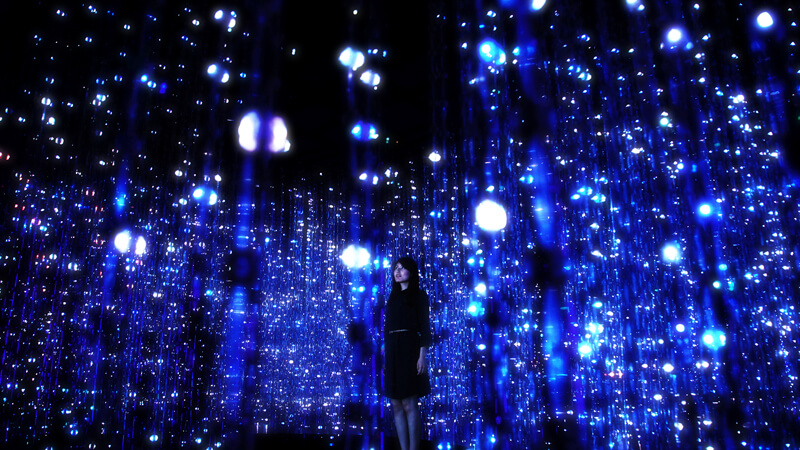 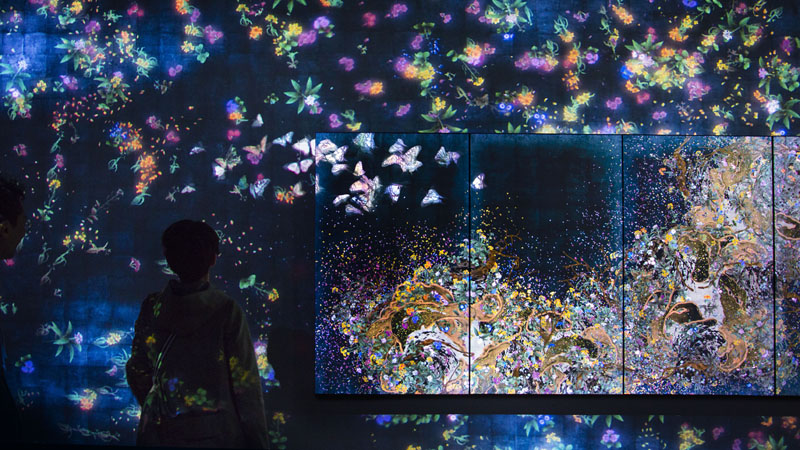 (Flutter of Butterflies beyond Borders project)

teamLab is a Japanese collective and creative group that aims to blur the boundaries between art, science, technology and creativity, through co-creative activities. This interdisciplinary team which includes artists, programmers, engineers, CG animators, mathematicians, architects, web and print graphic designers and editors was founded in 2001 by Toshiyuki  Inoko, and refers to themselves as Ultra-technologists; they ‘explore which parts of Japan’s pre-modern cultural past concepts have been lost during the modern period, and what transformation allowed some of these concepts to continue into contemporary society’.

Japanese culture has always been intimately related to nature. Likewise, the Japanese attitude towards it has been described as ‘man in harmony with nature’. This spiritual bond with nature becomes evident through various practices and has had a very profound impact in the aesthetics sense of Japanese people. In particular, Japanese artists for centuries have expressed this in Japanese gardening. The origin of many of these beliefs dates back to ancient Shinto, a widely practiced religion in Japan.

This synergic understanding of the natural world is in total contrast from modern cultures, especially Western ones. As teamLab says:  ‘It is common to hear people of today chant, ‘We are a part of the earth’, and in their heads, they understand this. However, people behave as if there is a clear boundary between themselves and the world, and they act as if the world is different to the one that they are in”. The collective wants to bring the spectator into a place where there are no boundaries between the different artworks and the audience, a place where a new way of seeing and perceiving will challenge our preconceptions.

teamLab installations and exhibitions usually consist of several pieces in multi-room environments, like the one that took place for the inaugural show of PACE Art + Technology Gallery (California, USA) which spanned 20,000 ft² and showcased 20 digital works. The group has also set up a series of short ‘manifestos’ that put together their conceptual framework: the spatial awareness of ancient Japanese, relationships amongst people, light sculpture, ultra subjective space, transcending boundaries between artworks, body immersive, digitized nature digitized city, collaborative creation. These are the pivotal concepts where the collective’s inspiration finds ground and stems from.

Butterflies revolting around with mesmerizing movements, trees and flowers that bloom into the audience, the seasonal cycles, the flow of water or even ancient calligraphy. In the hands of the teamLab creatives, these objects and events are digitized, rendered in 3D, and brought to the viewer through immersive experiences. Rooted in the tradition of ancient Japanese art and contemporary forms of anime, teamLab´s artworks are envisaged to change our system of values and contribute to societal progress through the medium of digital art. 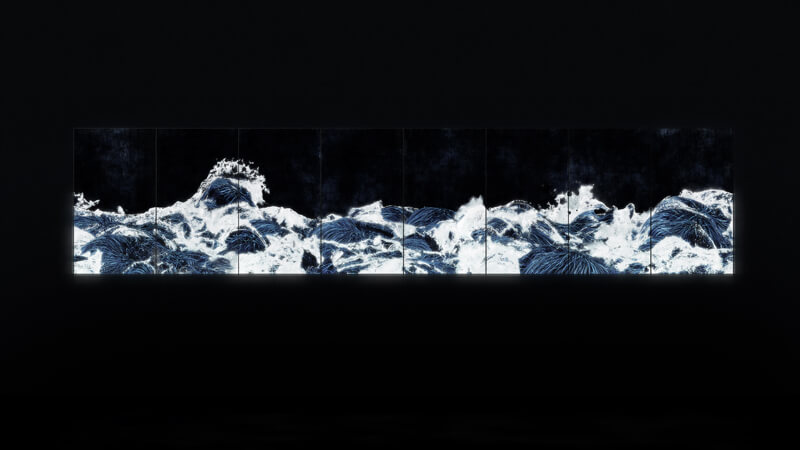 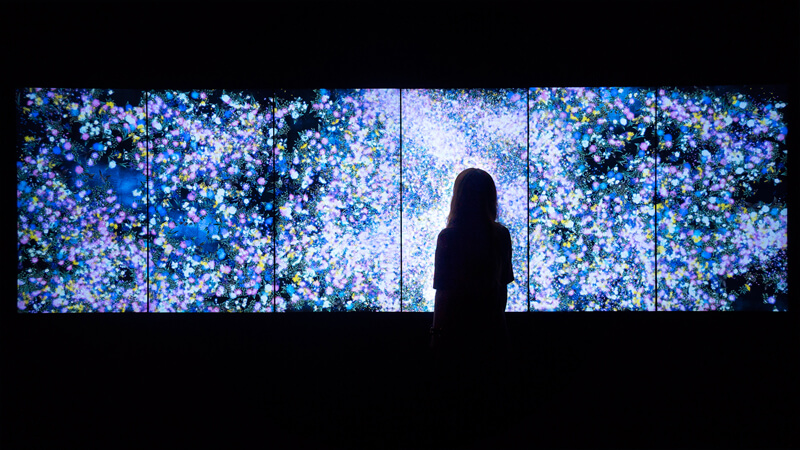 You are an interdisciplinary group of ultra-technologists whose collaborative practice seeks to navigate the confluence of art, technology, design and the natural world. How this common interest came about?

From the very beginning, our aim has been to change our system of values and contribute to societal progress through the medium of digital art. We believed strongly in the power of digital technology and creativity. What we wanted to do was to create new things without regard to genre limitations.

Your work is rooted in the tradition of ancient Japanese Art and contemporary forms of anime, emphasising the particular Japanese sense of spatial recognition and investigating human behaviour in the information era. What do you want to achieve with these creations?

We like to use cultural concepts that might have been lost in the past due to the incompatibility with modern times. We also believe that this current society built on digital and networks will become a different society from the modern era. In other words, we see certain hints for the new society in the cultural knowledge and social understanding of the pre-modern era.

These little hints may be hidden within the many patterns of times that existed prior to the modern era. Because I happen to be born and raised in Japan, it’s easier to take an approach that incorporates aspects of Japan’s pre-modern cultural past. So, it was easier to take an approach that explores which parts of these concepts we have lost during the modern period, and also what transformation allowed some of these concepts to continue into contemporary society.

Living Digital Space and Future Parks at PACE Art+technology gallery is a large-scale immersive installation with multi-room environments spanning. What were the biggest challenges you faced for its development?

This was not the difficulty but rather a challenge, but it was a completely new attempt that the Pace gallery created an art gallery within the digital space. The digital realm, free from physical constraints, allows for unlimited possibilities of expression and transformation. Digital technology is a tool for change and a platform to express complex ideas and details; thus we offer utterly different experience from what you can see from the conventional art gallery.

Viewers and the environment take on a crucial role in defining and changing interactive artworks. The viewer is an active participant and ultimately becomes a part of the artwork. The boundaries between artwork and viewer become ambiguous. Unlike a viewer who stands in front of a conventional painting, a viewer immersed in an interactive artwork is more aware of other people’s presence. Interactive digital art changes the relationships between people within it and the relationship between people and art. TeamLab believes that the digital domain can expand art. We are exploring new relationships between people and art through a new digital language.

Digital technology has opened up new creative possibilities. It has also allowed us to take a scientific approach in exploring the logical constructs of ancient Japanese spatial theory. By using the logical construction of what we have termed ultra-subjective space, we can experiment with new visual experiences in our art. We are challenging contemporary human perceptions of the world.

The human race has progressed over many years on earth. We believe, however, that along the way members of modern society have forgotten how they once saw the world. By reaching back and examining past means of perception, we find hints for the future. Ultra Subjective Space holds great potential for digital artwork that can be experienced and changed through human behavior and action. It is no longer necessary for the viewer to stand still in front of an artwork to perceive it or to avoid making movements that might disturb other viewers. Interactive digital art can heighten art’s allure by interacting with and thereby making viewers participants in it. It frees viewer and art.

And teamLab’s experimental digital art project focuses on encouraging changes in the relationships between people in the same space through digital art.

Anything that inhibits freedom. We believe that creativity emerges from the diverse and diversity-inclusive environment. Thus, anything that hinders such environment can be the enemy of creativity. 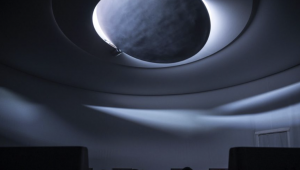 Event: ‘Spectrum’, by Schweigman & Cocky Eek in The Hague 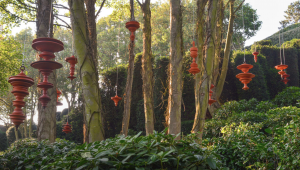 Installation: ‘Until the word is gone’, embodying sound waves of the word art