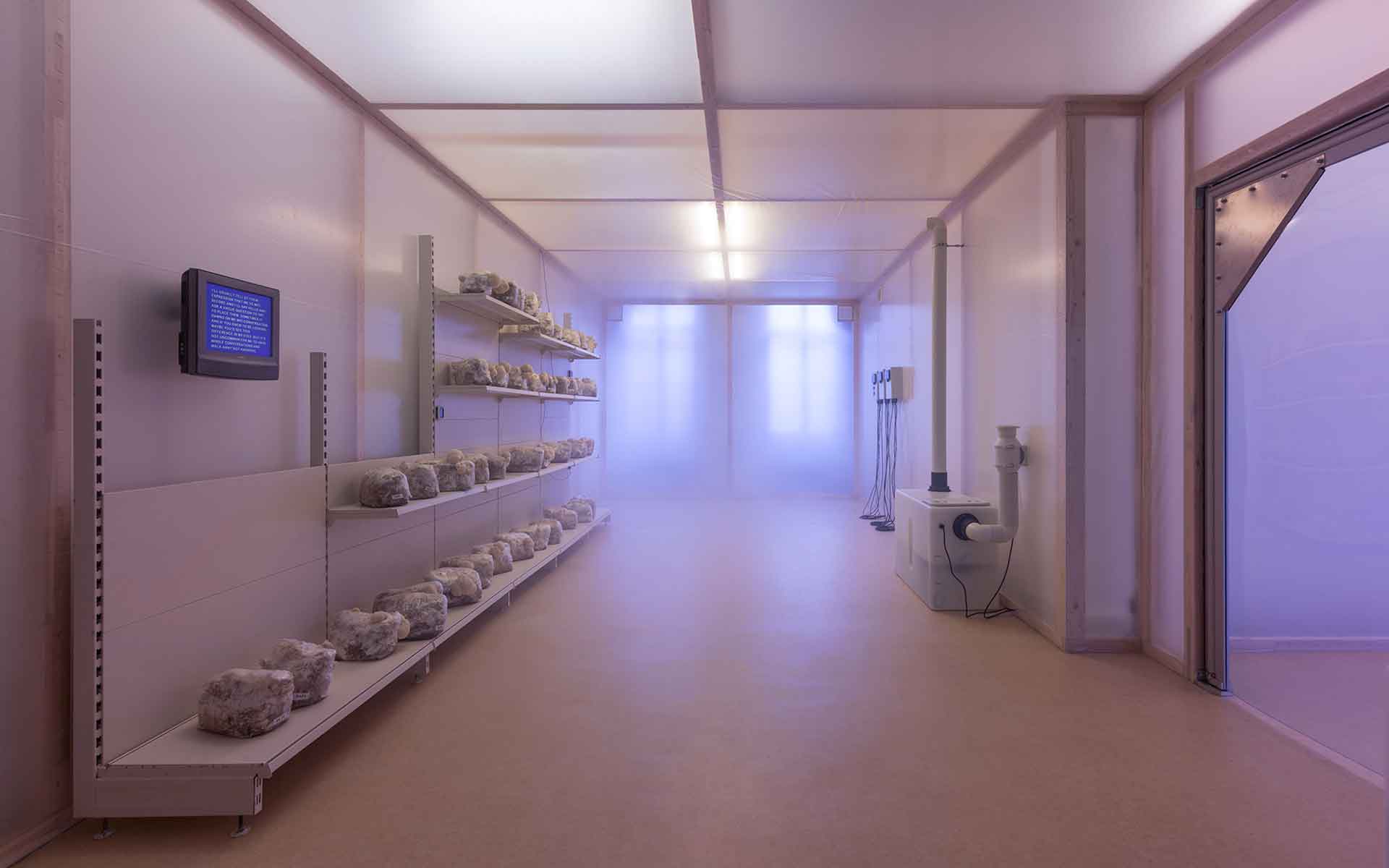 I came across Steve Bishop for the first time last year, when I visited his installation Deliquescing at KW Berlin which got under my skin in a way that exhibitions rarely do – if only because this time instead of entering a gallery I recall nothing less than finding myself stepping inside a parallel world. The space was humid with its walls fully covered in translucent foil.

A documentary film on an abandoned town in Canada resisting oblivion seemed to contrast with the vividly growing mushrooms placed in another part of the exhibition. Photographs shimmering from behind the foggy curtain revealed more detail upon touching – resembling the way in which we dream of – and remember long-gone events.  I was deeply impressed by the installations complex exploration of the fragile ambiguity of remembrance.

Coming from a background in sculpture, Bishop often uses a set of components to orchestrate different atmospheres. Like the dimensions of a coordinate system mundane objects, sounds and familiar arrangements form immersive environments that slowly reveal bigger questions of connectivity and meaning. Interestingly there is a sense of shared experience that emerges just from this gap between individually felt nostalgia and the sterile surfaces of anonymity.

The work Start over every morning serves as an example of this. For the installation Bishop used an ‘infinite kitchen’ made from scratch and the realistic model of a supermarket birthday cake to symbolise a timeline – raising questions about  „the infinite sprawl of time and our place within that“.

Symbols play an important role in Bishops‘ work. Even when dealing with quite complex organisms like the Lions Mane mushrooms he doesn‘t aim to conduct any scientific research. Instead, he extracts meaning from the symbolic messages concealed inside the object to gain new insights. But even though the objects function in a manipulative manner, their implications remain subtle and multifaceted. Finally, what distinguishes his work is the way in which the immersive environments go beyond the realm of the spectacular. By leading us „behind the curtains“ of everyday life his works open up worlds that hold room for discovery inside the familiar.


In your practice, you are working with different media such as film, objects and sculpture to address questions of remembrance and how spatial environments can reflect inner states. For our audience that is not familiar with your work; could you tell us a bit about your background, interests and inspirations?

I studied at Kingston University and then the Royal College on the sculpture course, and so came out with sculpture as the main way to get ideas out, but I was also making short videos while on the course and that continued. After a while, the things I was making also changed in that an idea was spread across several pieces, rather than distilling ideas into a single thing.

This meant the installation of them became part of it, and then that led to considering environments and making full immersive installations to house the videos and things. Working like this allowed for working with sound and light and letting the work reveal itself as someone went through it, and thinking about duration and the flow of people in a space. Making exhibitions and making artworks became the same thing.

When I saw Deliquescing at KW Berlin I was fascinated by the many ways in which different strands of association spanned between the displayed artifacts, assembling into dream-like atmospheres. Could you tell us more about your process behind that work? Do you have a working method for developing such complex assemblages?

That show at KW was a greatly expanded version of a small project I did in 2015, at Lock Up International which is a curatorial project by Lewis Teague-Wright. The show was in a self-storage building and I really liked the setting and wanted to make an analogy of how the facility was brain-like as a place for storage, and then to make something that represented memory.

The physical and the intangible contained within. I wrote a short text that was about a person whose mother has Alzheimer’s, and I grew a mushroom called Lion’s Mane, which is currently of interest in treating Alzheimer’s and other cognitive brain disorders. There was a found Polaroid of a boy with his mother in a corridor that looked a lot like the corridors of the storage building. This small showing of things felt like a sketch to later revisit and it grew quite a lot when it grew into the show you saw at KW. But it stayed true to the idea of these elements of the story and the two objects that represents the physicality of the brain and the memory.
But the mushroom aspect turned into transforming the whole of the second floor of the KW into a polyethene-tented grow room, where the life cycle of the mushrooms was played out, from colonised mycelium in fridges to fruiting on shelves, to harvesting and composting.

The photo became a film, which depicts an empty town in Canada that is looked after by a single caretaker. The film is a tribute to their efforts to preserve things the way they were, like a time capsule, but nature is gradually taking effect and the buildings are sagging and the age is showing. The town was empty but in fact, gave it this dreamlike appearance or it could be read as a memory of a place once lived.

The show itself also took on the role of care-taking in having to tend to the grow room daily. A lot of the decisions on how to make that show came about by practical decisions; the whole space looks like that because that is what it would take to make a sealed environment and we had to protect the building from the moisture, the crash-doors were there to stop the moisture escaping. But I utilised the transparency of the room built in a room, I was thinking about superimposition of a space on top of another. And the aesthetic choices of chairs and shelving and flooring, it was to make one that would fit within the world of the film.

Starting from a very specific phenomenon, like the habit of pufferfish building sand-castles, your works touch on abstract ideas like the concept of time, ephemerality or remembrance. How do you use scientific research to create a poetic experience?

I’m interested in science and enjoy reading and watching videos about it. Especially physics, and things that relate to existential questions about the universe, or consciousness or finding a belief in something. I feel like my work focuses on these big questions at the moment. I don’t really use scientific research as such and I don’t feel qualified to make work that fuses art and science, as I’m really just someone who is curious. Something like the mushroom in the KW show was really just used for symbolic purposes.

That’s how I think about my use of things in my work, is that they’re there for symbolic purposes. The mushroom was there as both a ‘cure’ and as something living, both of which somewhat alien concepts to understand for the viewer, but also a symbol that falls prey to the very thing it’s trying to prevent; degeneration. That’s why the show was called ‘Deliquescing’, as the mushroom, the brain, and buildings and entire towns, breaks down eventually. Rather than it being a bleak outlook, I take it that everything is living, and everything ‘breaks down’ or rather gets recycled, as organic matter and mulch, and rocks and lava, planets and galaxies. It’s all cyclical.


That’s where my interest in science comes in; thinking about the laws of physics surprising us, is on one hand incredibly fascinating because I’m looking for some sort of answer, but also the more we discover, the bigger our universe gets, and the less important we seem.

Many of your works feature everyday objects that evoke some kind of memory, a certain feeling of familiarity. What fascinates you about these mundane items and how do you use them to communicate?

I like to use familiar things to evoke feelings of shared experience. If the things are familiar, or equally, if it is reduced in a way that is non-specific, then it can be shared by more people. It goes back to the existential questions I think I’m asking: are we alone, or are we all connected, and is it just a mental-state that separates us? In the show ‘Start Over Every Morning’, I made what I refer to as the ‘infinite kitchen’.

It represents the timeline which keeps going in, either way, each cupboard is the next unit of time etc, and in the centre of the kitchen is the present moment; a sculpture of an inexpensive mass-produced cake, never decaying being not a real cake, but lifelike enough to look as such.

If we can talk about remarkable ‘big questions’ about the infinite sprawl of time and our place within that, while looking at an unremarkable cake from Costco on a kitchen from IKEA, then to me that accentuates the question I’m asking.

You often write diary-style texts or short stories to go with a certain scenography. At what stage of the process do you produce these texts?

I usually write these at the end. They often tie up thoughts that didn’t make their way into the show.

Another intriguing feature of your work is the radios placed inside the installations, playing tunes of a playlist put together by yourself. What role does music play for your work?

Music is used for several things in my work, but the main one is as a symbol of communication. It’s so manipulative, that if you want to feel sad, play a ballad. If you want to feel happy, play something upbeat and on a major scale. In this way, I use it formally as another thing to shift around within an artwork. I call this the ’emotional weight’ within a work. I’m interested in the mechanics of music and why it makes you feel certain ways. Music is itself a communication, but it can travel from the source of the original feeling.

This is why I use Jazz in my work because it is synonymous with cover versions or ‘standards’. Cover versions, and playing other people’s songs, and therefore communicating other people’s feelings. With each interpretation of a jazz standard, you are really just hearing the person. Other genres can do this of course; Classical for example is equally or even more based on performing other people’s music, but is less about the performer’s self-expression.

Also, radios themselves are symbolic of this transmission of feeling, and they encapsulate the earlier idea of individuality and connectivity. I often think of a BBC radio show called The Shipping Forecast, and imaging a lone boat out at sea tuning in and feeling connected to civilisation.