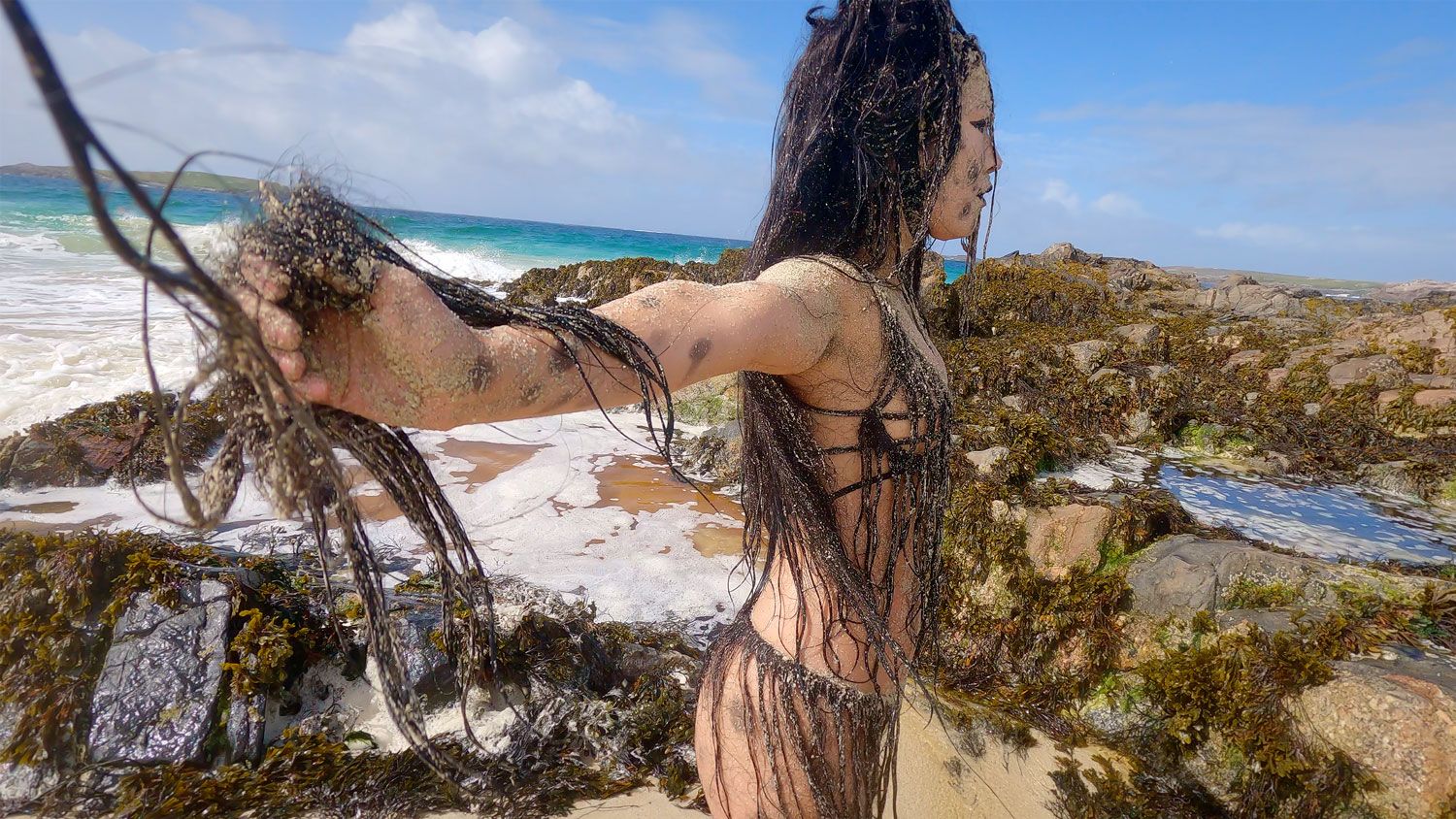 Soojin Chang is a Glasgow-based non-binary artist of Korean descent whose multimedia art practice considers interpersonal, interspecies and industrial interdependencies. Inhabiting the systemic cracks of boundaries between personhood and objecthood, art and life or human and inhuman agency, Chang works across performance, moving images and ritualistic practice. The artist’s research mainly deals with themes of identity, hybridity and man-machine processes, with a particular interest in xenotransplantation, multispecies surrogacy, and genetic engineering.

BXBY is Chang’s recent semi-fictional work, a year-long performance project exploring the fusion of life across the species, for which the artist received the 2022 Jerwood/FVU Award. Chang embraces technology and uses their own body to experience and convey their search for new ways of reproduction in the present moment, speculating for the future. Always in becoming, repeatedly reorganising, the shapeless body becomes an event of physical transformation and arousal full of affect. Experimenting on their own physicality to test reproductive technologies is also a way for the artist to simultaneously embody subjecthood and objecthood as a living queer organism.

With power relationships circluded within one body, the artist is able to explore the subordinating forces of our current cultural, social and political realms. On this year’s summer solstice at Forma Arts and Media, Chang and collaborator Georgie Lo presented their performance as a ritualistic gathering, incorporating physical movements and technological equipment to collectively meditate on the question of land redistribution and ownership. The art piece borrowed from animist methodology and approached the exhibition building as an animate being.


Chang’s most recent work, presented at Leeds Art Gallery, Sacrifice to the Seaworm, is a multimedia installation that references the sea gods featured in the opening scenes of their previous performance piece, BXBY. Sacrifice to the Seaworm was created after Leeds Art Gallery’s decision not to show BXBY due to its sensitive content, including documentation of a deer being culled and images of cervical self-experimentation done at the artist’s home.


After consultation with Jerwood Arts and Film and Video Umbrella, the artist has decided to work on a piece that questions censorship and the role of Western art institutions in shaping ethical values and depictions of violence. The new work was made collaboratively with writer Tenzin Mingyur Paldron, who reads an adaptation of his essay, Virtue and the Remaking of Suffering”, which asks people to think beyond pity or resistance when understanding acts of self-immolation, and artist Jade O’Belle, who performs a ritual using their body to identify, expel, transfer, and intentionally kill residues of past actions. A burial mound is at the centre of the room, made with insects, bones, coral, and shells from the Natural Science collection of Leeds Museums & Galleries. These performances challenge Christian understandings of violence, non-violence, death, burden, and sacrifice.


All of Chang’s works are of a highly collaborative nature and often include close friends. As a result, the artist hardly distinguishes their practice from life itself. To contrast different realities, using fiction to understand reality is another way of exploring and expanding the gaps in the current social system, as they become more apparent when recorded. Having been raised by Evangelical Christians in the US since their early years, Soojin Chang has been experiencing political and personal divisionist tendencies.

Using their fluid body as a statement to tackle the ontological bounds of the human species, blind to the idea of belonging from the beginning of life within the bordered land on Earth, untold the stories of sharing, having departed from their true nature beyond the differences impressed on the rigid reality of matter, Soojin Chang turns to technology as one of the ways to understand how subversion of power could ever feel and be embodied.

Soojin Chang’s installation Sacrifice to the Seaworm (2022) will be exhibited at Leeds Art Gallery from 18 November to 22 January.


Your art practice explores interspecies relationships and extra-terrestrial identities, questioning what it means to relate with another being. Would you like to share some of your early life experiences, observations or realisations you had that led you to devote your practice to dealing with issues of personhood, its transformation and dissolution?

My first 6 years were in San Francisco and Ilsan (a satellite city to Seoul). Afterwards, my family immigrated to Chula Vista, 10 miles from the Mexico-United States border, where I grew up. My parents are Evangelical Christians. I was raised in a puritanical household and community. I find it useful to acknowledge this community as a cult, though I ask the reader to consider how they personally define a cult. I am shaped by the feeling of being in extremely differing realities simultaneously.

When I was 13, I broke away from the church. Being perceived to be a threat to personhood, not only as a migrant by xenophobic Americans but also within my family, the church, and our Korean-American community, has instilled in me from a young age that fear and shame are largely what maintains the hard divide between personhood and objecthood, or the human and nonhuman. I don’t desire to join personhood on these terms, and I very much am alive when experiencing objecthood.

Your work might feel personal, as you use your own body to perform, and you have also closely collaborated on your long-term projects with close friends. How do you see life and art intermixing and influencing each other?  What challenges have you encountered when simultaneously dealing with fiction and reality in your life and work?

I use my body because it is a body that I have control over and will surrender to. Self-experimentation is the inverted realm adjacent to the dead-end of ethics and morality. For BXBY, I use my body to self-experiment using reproductive technologies, and by doing so, I am a scientist and extractable animal, coloniser and the colonised, consumer and the consumed, sacrificer and the offering, mother and child, parasite and host, complicit and impacted. What is it like when you must share sensations together? I began acknowledging my organs, hormones, and tissues in making BXBY.

Currently, I do not see a divide between art and life. Everything goes in. The artwork channel results from a particular reorganisation and revaluation of life’s many different realities. For BXBY, I presented as a human-animal hybrid made in a lab that wants to create belonging, which is simply a representation of who I am. What do I need to find belonging? What is killed and birthed on the way? One of the most interesting parts of this process is seeing how that reorganisation rubs against and alongside the organisational structures of industry, ethics, morality, and the law.

Of course, having no divide like this could pose personal problems: overworking, relationship troubles, excessive dissociation, etc. But the problems I’ve faced are less about the artwork and are instead issues that exist anyway. The collaborators who stay in my life are those that have an ongoing practice of personal agency. You show up in the present moment of the collaboration as you are, with the realities that you hold true, the realities you long for, and your sense of power. Glitches, shadows, and breaches are also brought to the surface when presence is being recorded. As for fantasy and reality colliding, this, again, happens whether you see a divide between art and life or not. All collisions are destructive. Some are more violent.

What kind of future do you imagine and speculate about in your works that incorporate the ideas of hybridity and bodies of chimaeras?  What is your vision of the new age family or an alternative community kin-making?

I have, until recently, been drawn to the idea of a wildly different utopia. Right now, I cannot think that far, and I’m not sure how necessary it is to jump so far anymore. I am leaning into how much abundance there is already and how redistribution of this abundance is all that is needed for now. This hinges on practising power shifts in various scales – interpersonal, interspecies, industrial, etc. Therefore my speculations are limited to specific conditions. How it unfolds is an experiment based on individual responses to this condition: whoever/whatever is used as raw material is prioritised as beings and recognised as holding the highest form of power (in a given interaction). Here, I refer to raw material to include whatever/whoever is used for another’s consumption (in a given interaction). What would that look like right now? How will we be in submission to those we cannot understand, to those who will not command us? How will surrender and power become interchangeable when it is our turn to be consumed? What technologies will we need to better understand? Everything else, including family formations, will follow.

In order to stretch time in those given interactions to properly feel through new subversions of power, technology could be used to temporarily open portals. Once leaving the portal, a thousand years of learning will feel like a few minutes. Here, of course, the first thing that comes to mind is the metaverse, though I do believe certain moving image work, live performance, installations, intimate touch with oneself and others, and deep conversations are technologies that also already bring about such portals. Portals, I should add, are not exits.

Where do you see technology in the evolution of earthly beings, and what role does it play within the natural bodily processes in the present moment? How will hybridity manifest in man-machine interactions in the following years?

Specific interests in my research are xenotransplantation, multispecies surrogacy, and genetic engineering. All of the technology (to grow human organs in a pig, to design a blue-eyed child) is already here. What will happen is already happening. I am more interested in how we understand hybridity and how we limit or expand the idea of animacy. If your child is born through IVF, where the incubation is monitored by AI, can you see the machine and the human clinician as collaborators in this process? What about the colony of lab animals and human surrogates that perfected these rituals? Are they part of our ancestral lineage? Our readiness to see a tool as fully animate will dictate how hybridity is either embraced or erased. Which narratives contribute to your resistance to such readiness?

Your work BXBY explores the idea of reproduction. Do you think this is the problem the future might face? Are you preoccupied with species survival, or rather does your work point to disconnection from hereditary prolongation?

I am interested in species survival requiring far more than sexual reproduction.